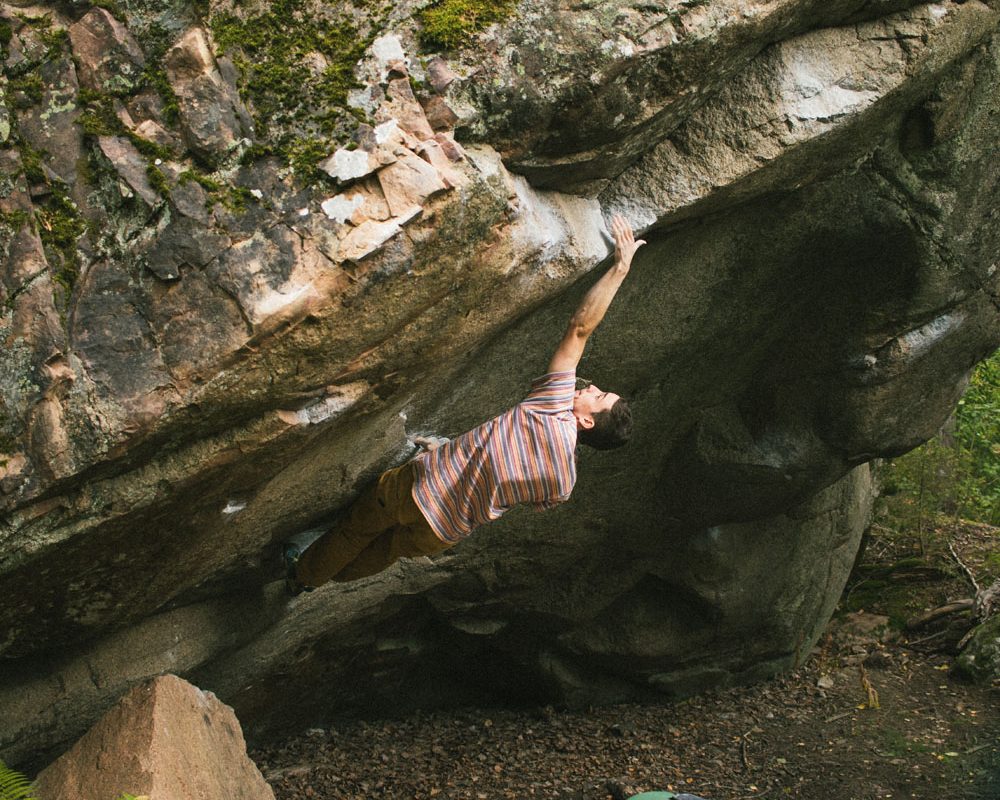 SCARPA athlete Eliot Stephens has recently returned from a very successful bouldering trip to Uppsala in Sweden, where he hunted down some incredible problems for himself. Below, he talks about the 5 problems in detail, accompanied with some video footage of each. A really interesting read if you are planning a trip to Sweden.

While Vastervik may be at the top of the list for Swedish Bouldering, Uppsala certainly holds its own as a standalone area. Just 30 minutes from Stockholm Arlanda airport, Uppsala is perfectly placed for a quick visit and hosts a huge number of problems at a couple of pretty large areas. As with Vastervik, the gems are there to be found but you must be prepared to hunt for them, both before your trip and through the vegetation when you are there.

I spent hours scouring online websites as well as local climbers photos for problems to try. I eventually formed a list and managed to make it through most of them on the trip. Below are 5 of the best problems I managed to get on film during the trip. No edit, no scenics, just 5 boulders of brilliant quality in a beautiful part of Sweden.

This may have been the best quality problem of the trip. When digging online for potential problems before the trip, I came across some pictures and a video from Swedish legend Stefan Eklund. They showed this 30-degree shield wall with gymnastic climbing. My interest was peaked further by Stefan’s description of ‘Brione style’ rock and I thought to myself ‘surely the rock can’t be as good as Brione’. I was wrong!!

Stefan graciously gave us the low down on the area, including a hand drawn topo. On arrival we were pretty blown away, Stefan’s description was spot on and the rock and line were incredible! After failing a few times to get the starting left heel hook to stick, Morgan advised a change of shoe. the Drago was the weapon for this one, and after sticking the first move, the next go I climbed straight to the top.

Jon was one of the first problems I had on my list. I was really drawn by the look of the towering blunt arete and the thrutchy powerful movement. This problem was certainly in my mind as one I could potentially flash, so, I made an effort to take my time. The problem resolves around 3 moves – an awkward pull on and first move, a thrutchy move to a crimp and a long lock to a sloper.

As it turns out, putting my heel above my hand isn’t a strength of mine, so my first goes were poor. After sticking the first move, I realised the second was also tough and the hold you were going to was sharp. I realised I needed to execute quickly, or my skin was going to take a battering. After a rest, I managed to squeeze a bit harder, hit the hold well and find myself on top.

This one is quite the opposite to the previous problem. It’s quite a bit longer and entails a very finicky hand position on a pinch that you think wants to be held as a sloper. After fondling the hold from the ground, I worked out exactly how I needed to hold it. My flash attempt saw me all the way through the crux but fumbling off what should be an easy finish.

I figured i’d be able to climb it a go or two later, but the top just wouldn’t succumb. In the end I had to walk away, hoping that on a different day my skin and the conditions would be a little better. I was right, as returning a few days later i was able to lay down the pads and climb it first try.

Another Stefan Eklund classic, this mini roof on perfect granite was high on my list. With it being only 15 minutes from our house, it turned out to be our first port of call on day one. While only being a mini roof, this one really appealed to me with its small crimps for the right and nice pinches for the left. I figured the first move would be the crux and it appeared after that. After a poor flash go, I quickly climbed the rest of the moves on the boulder and began trying from the start.

After maybe 30 minutes and several shoe changes I was beginning to doubt my chances. While resting, I made an effort to try and work out exactly where my left heel needed to be on the start hold and what position my body needed to be in upon doing the first move.

A few goes later and I started to feel close, with my body swinging out just a little too far and my heel coming off. Then I stuck the first move, only to miss the next hold badly. Annoyed but relieved I rested for a little bit. The next go I stuck the first move perfectly, my body barely swung out at all and I stuck the second move as I had in isolation. From here, my heel placements were poor but I manged to scrap it out to the top. A great one to start the trip!!

Purely attracted by the line, this problem was one of the first I checked out on our first few days. I’d seen a video of the 7B stand start but had no knowledge of the moves on the low start. When I found the boulder, I was disappointed with what appeared to be a massive span from the first hold of the sit (a big jug), all the way to the left arete of the boulder.

From here there would be no way for me to bring my right hand up into the first hold of the stand start. There was however, a small mono in the middle of the wall. It wasn’t warm and without chalk I didn’t even consider I could use it. I walked away and dismissed the boulder until a day or two before the end of the trip, when the other guys wanted to try the stand start. I figured I may as well have a go and see if there was a way. When warmed up, I realised to my surprise that the mono was holdable. However, I’d have to fully weight it with a very poor left foot and move up left hand to a side pull.

From here I could put my right foot up and slowly lock into the starting edge of the stand start. After making sure I knew the stand start, I went from the floor and went to the top after sticking the move off the mono for the first time. A great last problem of the trip.

While the quantity in Uppsala may not be there, and the rock quality varies pretty significantly, there is so much to be said in this day and age for heading off the beaten track. When areas like Magic Wood and Fontainbleau are weathered and abused, it’s truly refreshing to be the only climbers in the area, the ones breaking the trail for the season, the ones chalking up the boulders for the first time in months, not hours.

This experience is something I will certainly seek out again, in more areas of Europe especially. But on this one, Uppsala held its own and showed a lot of hidden character and diversity. The boulders are there, the projects are there, it just needs attention.

You can take a look at Eliot’s SCARPA team profile and find out more about his life and how he got into climbing.