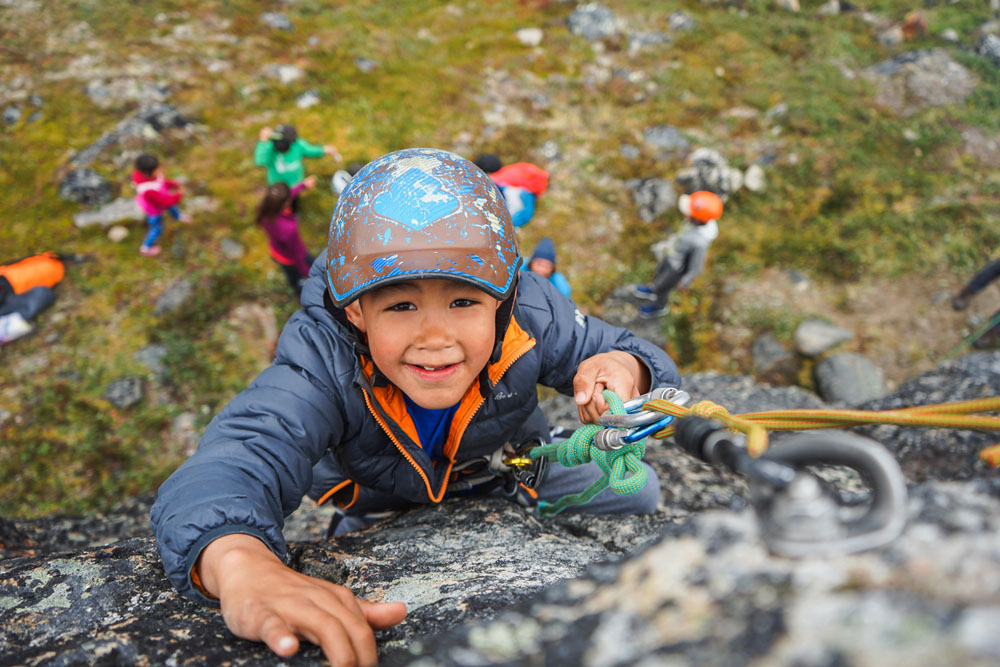 Earlier this year SCARPA athlete Jacob Cook, along with his wife and two friends, travelled to Baffin Island, Canada. It was a 40 day expedition which involved lots of climbing, setting up a new route on Mount Asgard and climbing with the local kids.

We caught up with Jacob after his trip, read the short interview below to hear what he had to say:

What was your inspiration for the trip, why Baffin Island?

This was my third attempt at getting to Baffin Island! I got together a team and some funding in 2015 and then again in 2016, but both trips fell through at the last minute. If you’re interested in climbing huge remote granite walls, Baffin Island is basically the bees-knees. Especially since I’m primarily a rock climber and tend to avoid overly snowy stuff like in the Himalayas.

Did you do any training or preparation for the trip?

Yes and no. In a way it’s something that’s very hard to prepare for, but in another sense, I’ve been preparing for this trip since I started adventure climbing around ten years ago. Adventure climbing is something one must progress very slowly at because the margin for error is quite small; you really can’t mess up out there. I’ve been building the skill set to do things like this for a long time. Trad climbing in the UK, big wall climbing in Yosemite and previous expeditions to Greenland in 2013 and the Cirque of the ‘Unclimbables’ in 2016 all contributed to my preparation.

Physically the main challenge for somewhere like Baffin is to be able to keep moving continuously for many hours in a row. Because of the scale out there, and because of the 24-hour daylight, it makes sense to attempt a lot of objectives in a single-push style. There is no chance of getting benighted, you take minimal gear and just plan to keep going until you reach the top and then come down. Over the trip our successful climbs involved pushes of 20 hours, 18 hours, 21 hours and 40 hours (with a bivvy), so we had some big days. To train for this I climbed a lot of big walls in Yosemite in single pushes and got my body used to running continuously for a long time without cramping etc. Also learning effective tactics like nutrition and pacing for those huge pushes was crucial.

Was the paddling and hiking challenging to get to the mountains?

So, we decided to make our trip self-propelled to and from the village of Pangnirtung. This gave us a better sense of connection to the land and made the whole trip feel more like a journey. We began by paddling 30km up the sea fjord. Most expeditions just get a ride on a motorboat for this part. We then hiked for 40km with very heavy bags indeed. I think our bags probably weighed close to 50kg, which was not a highlight, especially as it stormed every day of that hike.

Then on our way out of the valley we ran sections of the Weasel River in our pack rafts. This part had a lot of whitewater and was quite exciting. We put in just upriver of Mount Thor and immediately got a taste for how violent and fast flowing the river really was. Zack fell out of the boat and swam a significant section of rapids. Then he got back in and him and Thor immediately flipped, both swimming another section. Bronwyn is a very experienced white-water guide, so we trusted her judgement on which sections were safe to run. Although we played it a bit more conservatively after that.

What was your highlight of the trip?

So many highlights. One that immediately jumps to mind is standing on top of Mount Asgard with Bronwyn at exactly midnight having climbed our new route on the South Tower. We watched the sun dip below the horizon for a few minutes only to start rising again in a beautiful sunrise/sunset. Moments like that don’t come along very often.

But honestly the highlight of the trip was spending time with our small team of four friends in such a beautiful place for six weeks. We’d all been into the Cirque of the ‘Unclimbables’together in 2016, so we knew we gelled well on trips like this. All four of us have a lot of experience doing long remote trips and we really see eye to eye on how to do things out there. We work well together as a team and on top of that we also all like to keep things light-hearted and fun and have a similar sense of humour. We just had a blast out there!

What was the toughest part of the trip?

Honestly the toughest part for me was fearing dying all the time. Nothing really prepares you for being faced with the reality that you might die in the immediate future. It’s terrifying in a way that your rational brain can’t really override or even process. Don’t get me wrong, I know that in the grand scheme of alpine climbing our trip wasn’t that dangerous, and we were playing things as conservatively as we could. But that doesn’t change the fact that in huge terrain like that there are many unknowns and things can go wrong very easily and very quickly. It’s been a strange journey to come to terms with the fact that the thing that I love doing more than anything else (climbing) could kill me.

The trip seemed like a lot of fun, was this made easier being there with a group?

Our team was just amazing, we have such a blast together and managed to keep things fun and light-hearted daily. A highlight was bringing along our giant inflatable flamingo and running some quite significant rapids on it. Oh, and Zack doing his Sean Villanueva impression by attempting to play his penny whistle, very badly! By the end of the trip he could do “The Final Countdown” and the Jurassic park theme tune.

It was really refreshing to see you engage with the local communities. Do you think this is something climbers should do more of?

This was a key part of our expedition from the word go. Thor had spent a summer living in Pangnirtung in 2012, he had some local contacts there and was keen to engage with the locals in a more meaningful way than just flying in and out. Growing up in Pangnirtung has its challenges so we decided to try to do something fun with the local kids; take them climbing. We ended up making top rope anchors on a local boulder, so hopefully future climbers to the area can get the kids out again.

For me one of the best things about travel is to get to meet the people from the places we go, I think all expeditions should consider their impact on local communities and try to make it a positive one.

40 days is a long time for a trip. Where you happy to get home?

Yes. It seems that my drive to do big trips like this comes along once every three years, so looking forward to my next expedition in summer 2022! For now, I’m excited to do some sport climbing in Spain this winter…

Keep an eye out on our social profiles for more of Jacob’s adventures.