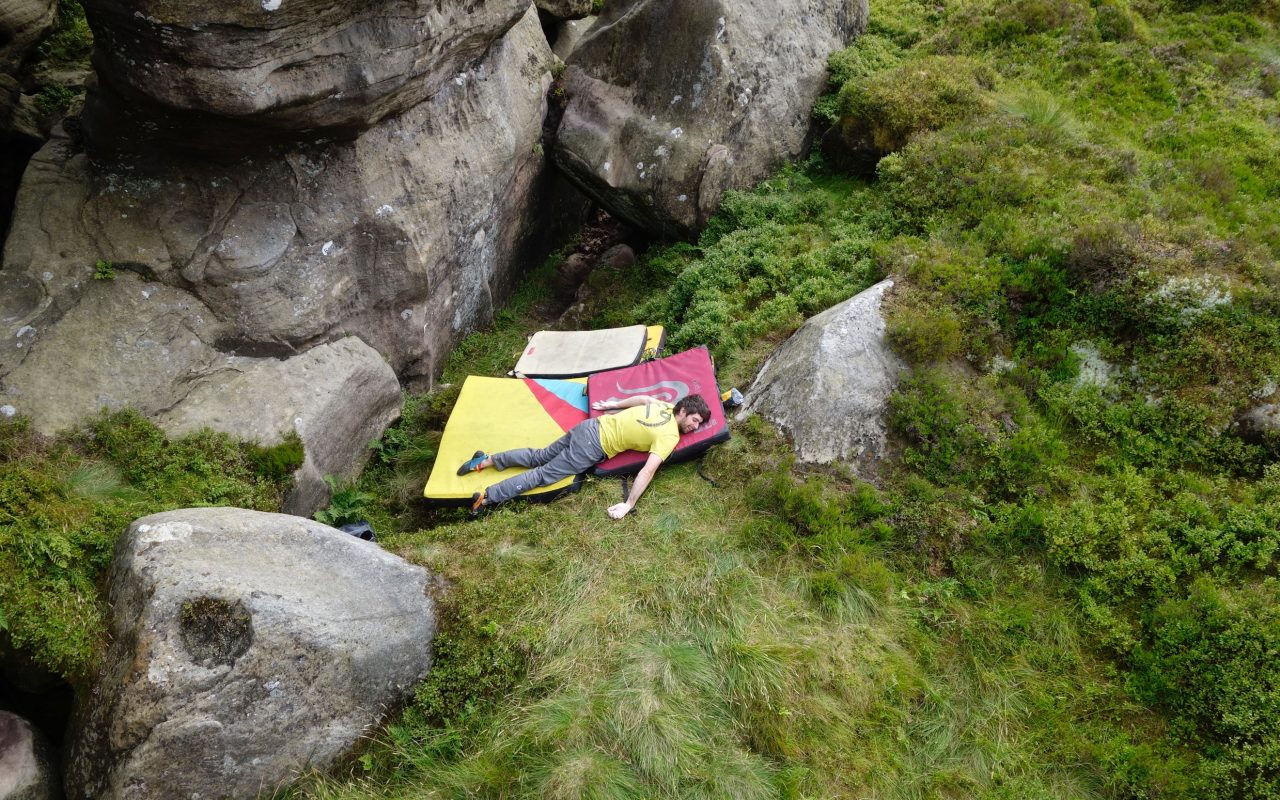 Following on from part 1 of his Christianbury story, Dan Varian now tells us about a nasty wrist injury and lots of spare time to ponder local places.

In 2018, thanks to middle age, work, kids and a smashed up wrist – pick your excuse. I found myself pondering local places with less drive time in that magnificent hot dry summer.

The one venue that kept popping in to my bloody head was, Christianbury. As by the craziest coincidence our friend Shaun Parkin had made us a teapot as wedding present that looks exactly like the boulder at Christianbury that housed a conceptual project in my mind. Considering it’s a crag he’s never even seen, he played a blinding bit of inception. I found myself staring at the teapot a lot and inevitably thinking of the abstract bulge up that very boulder. What if that project actually goes I would think … and then I would get on with my brew.

By the summer my mate Alex was at a loose end after easily snaffling Franco’s naively advertised country projects (and a few of mine) and crucially he was gullible. Maybe I could make him do all the brushing. All I could do with my wonky wrist was run about anyway so we started some stories. We cleaned quite a bit up and worked our way right through several classic lines that really should have have been done in the 1950’s through to 1990’s cutting edge.

During that time I finally abbed the tea pot bulge that I had dismissed as just a visual feature. This was mainly just so that I could have a cup of tea in peace, but the devil makes work idle hangs. I dangled up there for ages and just imagined that if I could climb well again, what would I do, is it possible? (the answer to this question isn’t always yes, believe me) I spotted the only possible sequence. As there’s such a dearth of holds that what is there jumps out. Frustratingly my knackered wrist had a long way to go before even trying the moves; I could finally see it in my mind, it had taken years but finally it was there, burning through the teapot. Now all I needed was the form to cash the cheque.

I grew up in Cumbria 20 miles from this crag, it is in clear view from where I went to school. So, how come for the last 16 years I had ignored it? The biggest, roundest most curvaceous and barely featured blob of nicely textured sandstone around? Because at some level I am a complete idiot. I failed the gorilla in the room test. Seeing a line is sometimes so much harder than seeing a rock. And this particular line for me was maybe the UK hide and seek champion, it cleverly disguised itself as too blank because its compression is so vague and obtuse between hands and feet.

Most of my bouldering life has been spent as a keen hobbyist really. I am well aware bouldering is worse than fishing when it comes to trying to explain it to normal people, explaining subsets is even harder. It’s probably on a weird par with mushroom picking but far more pointless and dangerous. Whilst essentially being a local pond fisherman I have always had the imagination for catching big fish. Northumberland, Scotland, Yorkshire and the lakes have all provided to some extent, or at least grouch or malign an aspect of someone else’s “good” effort.

That’s not to say I haven’t had loads of fun, it’s just that as the ear gains experience one can tell more often when the note is off key. What were once exciting projects can also become demotivating if they slip into the too easy or too simple category too, a pitfall of training that many climbers rephrase as progress.

Whilst my wrist was held together with stuff from a screw fix catalogue I had plenty of time to read in the void left by climbing. Plenty of time to question whether it was worth attempting to join Sisyphus once again or whether just to enjoy the many other great parts of life. Two nice books that made an impact in this time were Zen and the art of motorcycle maintenance and Barbarian Days.

I could have been far stronger if I had trained methodically and gone for less soggy moorland walks. Far more sociable if I had have gone to the pub more etc. But I really enjoy looking for real world challenges that teach me more about how to move well on rock and how to improve. In order to progress onto its blankest challenges, niche knowledge is required for insane strength; finding truly quality hard projects that fit these niches is desperate but on sandstone it is just that bit more possible.

Experiences and quality aren’t always linked. Quality is subjective in the extreme and very much a part of how one grows up. So, maybe for me this project was already ticking more boxes than I realised.

By April this year and with our second child imminent I needed an excuse to do legitimate man tasks that allowed me to escape the house. Unfortunately, I left it far too late for anything but bouldering and DIY to be worth major man credits and DIY doesn’t get me out of the house.So, if I was going to escape I need a project! Not just any old thing either as Katie would see through that, this thing had better be water tight awesomeness for it to float across the oceanic parental covers-ocean that is “do you mind if I nip out for a climb tomorrow?”.

I was keen to get back into shape (straight arm instead of wonky) and what better excuse that a really big pipe dream line. I had barely found a decent one that took more than a couple of sessions since becoming a parent back in 2015. My wrist was still a huge factor on some moves but outdoors one can cherry pick the challenge, so all I needed was to clim round it as it improved.

So this year I began nipping out to the middle of nowhere to stare down on our quiet corner of society. There were probably times when I was the remotest person in England on some of those days and it certainly feels it on that hill. My main partner up there save for the excellent Tim a few times was my inner dialogue. Which nowadays mostly flits between theme tunes to CBeebies kids programmes, weather analysis and thoughts if this project is truly any good or am I kidding myself? What is quality? God damn you Pirsig.

I have been pretty good with progress and level headness in the last few years and especially that 2017/18 grit winter, but I have not got wrapped up in a big project since the kids were born. I kept practicing until it all started to flow well. The first session without the rope I had Tim with me and it felt surreal to be actually bouldering the thing. What was once a concept was fast becoming a climb. That day I felt strong on everything except the crux RH pocket, I fell off a lot but I was pretty happy about it as when I looked up I no longer saw a rock in my minds eye, I saw a climb.

Keep an eye out for the third and final instalment coming soon. If you missed part one you can read it here