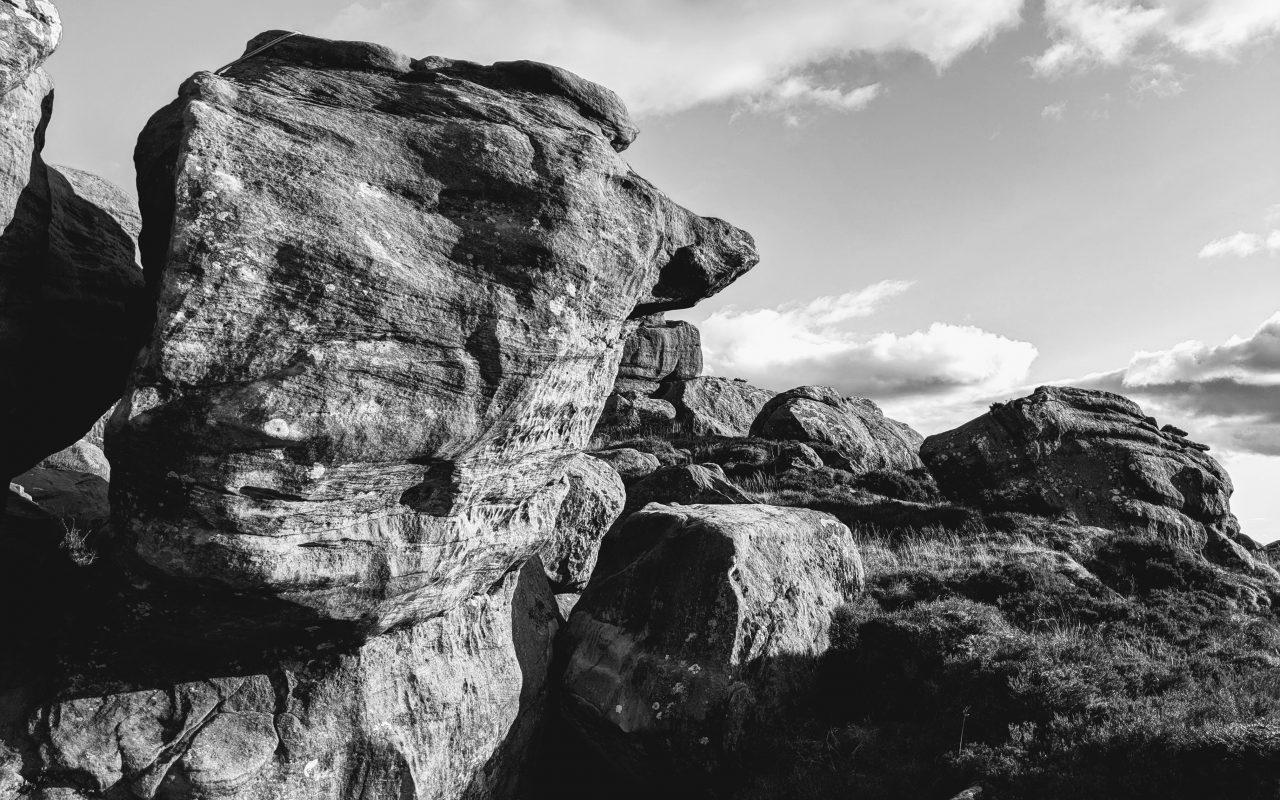 In the third and final series of his article, SCARPA athlete Dan Varian goes in to detail about his Favourite SCARPA shoes and the day he finally mastered the boulder ‘Christianbury’ a project that consumed his mind since 2005.

I will try and explain just some of the detail I go into when faffing about on a hard project. Out of Scarpa’s 30 types of climbing shoes, I own about 10 different types. Before, how good you are was decided by your follower count, I used to test prototypes. I have no followers though so bear in mind that I have no authority.

You can scoff and say a shoe is a shoe, a golf club is a golf club or a surfboard is a surfboard. But, personally I love noticing the slight differences (sometimes unintentional) between shoes; you can then bank those differences in order to speculate on their best future use.

Detail tends to benefit those who really need it to progress, otherwise it’s worth missing until that time. I tried about five shoes out on this climb including two sizes of the Chimera and two different stages of wear on the same size and model Chimera. The Chimera was the best fit for the smeary left foot for the climb but the right has a super tension cross foot heel torsion move which you are both extending off and twisting with at the same time.

It’s a really rare move and one that only bears similarity to a few others at a high difficulty in my memory, one that springs to mind is the move to the lip sloper on the Alchemist but the complexity of that problem if you are 6ft is low (this took me just under an hours work on a family holiday in 2016) it feels like a combination of that and a mirror of the move to the pocket on Superbloc (2nd asc ground up in 2008) the heels need to buy you time to slow down the right hand to gain the pocket well.

Basically I needed a stiff heel to dam up against the good part of the foothold and a stiff sole not to buckle under the torsion, however, for the upper moves I wanted a soft shoe ideally for the dodgy smears at height. I ended up compromising on a worn instinct lace where the toe was thin enough to get feedback on the upper smears and 20mm behind the toe it was anew shoe so it still had the stiffness to hold on the torsion move well. I’d say all the thinking about that whilst up there bought me 8% more ease of doing the move over a bad shoe choice. Not a bad advantage really and certainly more justifiable than stripping to boxers to save weight … you can’t tell if I am serious or not. Am I? (actually, I did spend a whole session up there in my boxers in July as I had forgotten my shorts).

Each move had some real interest to it on this climb where I could fiddle with a body position or finger arrangement. I have not encountered a non slab project quite like it for varied and complex moves back to back on such a beautiful highball feature. No single move would be harder than 7C/+ unless you’re sort but there is a nice brace of them from the middle up that really combine well. The ninja leg toe scum out left where you just flick your hips up and craw with the right foot too is proper Michelin star stuff. Make it stay and there’s just enough angle to squeeze the three terrible features to free up the left hand for the slap and blind bump to a sloper dink. When it all works it just feels so smooth. When it doesn’t work, your left leg fires off violently and rotates you into the ground from about 4 metres up. Either way, it’s memorable.

In July I was on my tod again and I had kidded myself that I would just practice the middle leg flick above the pads. Inevitably that day I got through it, but with all the holds slightly off and glassy skin, I dropped off after getting the penultimate crimp (which is the first time you can really readjust to get back in the game if you’ve arrived off kilter on the holds slightly). I was annoyed with myself, disappointed that I was on my tod but also disappointed that I let it go. A younger me would have taken the gamble but not nowadays. Especially with the vivid memory of how fast useful limbs go snap it felt like the right thing to do in that moment.

My next chance to cash my man credits was almost a month later, our last weekend before Rhona started school. It’s hard work getting out on short notice so I gave Katie a heads up that the weekend looked good, wink wink. Saturday was my first pick but it ended up looking too windy and with a chance of showers, DIY and being a kid again it was.

All cards were now on Sunday. again no one was free to head up so I prepared to battle both the problem and my mind. In many ways I didn’t mind this, it heightened the challenge and really made me raise my game to something I will always be proud of. All this has felt like a futile endeavor of my own creation to distract me from real life; so I may as well take full responsibility for the lot of it. I was trying to prove in many ways what my teenage brain had imagined but not seen. As if this line were in font, it would be the best highball problem around the 8B+ grade.

On the Sunday, the warm up went well (I have been doing the same cherry-picked problems in the same order up there to gauge conditions and my form more accurately; a useful trick I learnt on The Rail). It felt like it had some really good grip, the weather was treating me well today. I was tense and over correcting on moves to try and gain holds perfectly. My inner dialogue was seriously busy between trying to quell any fear of limit bouldering at height due to pinging off any old way, with actually climbing and flowing well (in between singing those catchy lego songs). It felt ridiculous. It took the whole day to master and eventually after some huge rests and strolls around the lonely hilltop I felt ready.

I felt calm and collected, then my Go Pro promptly spazzed out and I thought, perfect, there’s nothing worse than the possibility of having footage of every go other than the one you do something this important, to really screw up your head, the ghost of G strikes again. Luckily I had brought my trusty back up Lumix!

I set off and I just felt like I was going to the top, I even made an error and held a cut loose I had never even held before, in some ways this gave me more confidence as I finally had power to spare after calming down enough to really enjoy the movement for what it was. I felt like I wanted to go to the top and could. I WAS going to the top. So, that’s what I did, I went to the top. This is the coolest bit of climbing I have ever done. Not only because of the line, difficulty, complexity and quality of the moves but because it immersed in my home landscape, remote enough to feel detached, near enough to focus on the difficulty.

To climb it on my own after having my wrist surgically reconstructed in April last year may be the best thing I have ever managed as a climber, so for those few seconds it was nice to feel that momentary perfection. The process of spotting, figuring out and climbing this line has really stood out. I won’t win any medals for it or to quote Joe Tasker “no trumpets, no anthems in my head” but it feels like I have finally focused on what it was, a blurry spectre of teenage aspiration. In fact it is the only reason I can be bothered to write all this waffle as hopefully one day I can have a pint with someone who would understand that moment.

There are truly some world class quality experiences up here. Destined for obscurity and to morph back into dirty monoliths but incredible nonetheless. That just sums up Bombadil for me. It has been an absolute pleasure.

I have still never seen the goats but this just might be my GOAT.

What has been your greatest of all time climb?

Keep up to date with Dan on his athlete profile here.