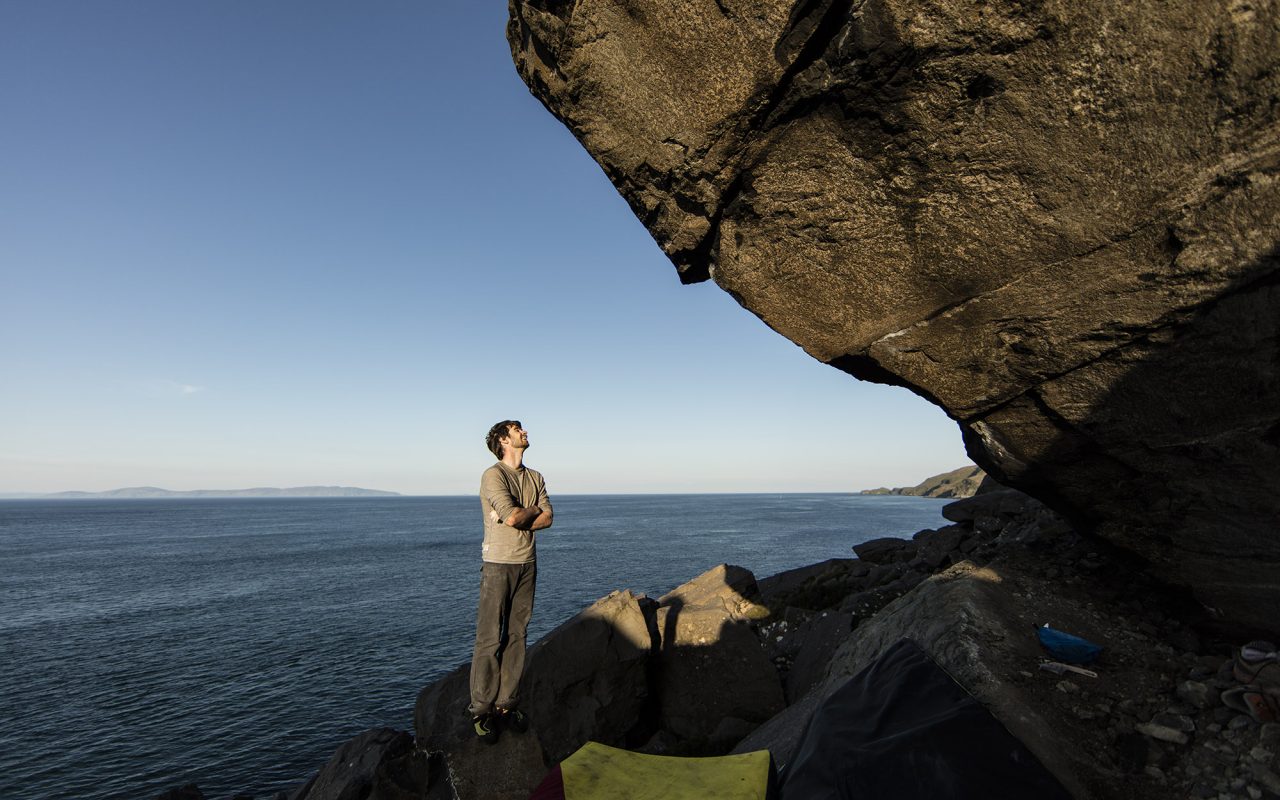 SCARPA athlete and well know climber Dan Varian talks to us about his success of climbing a project that consumed his mind since 2005 – Christianbury, a crag that lies just inside the Cumbrian border.

In this three part series he talks about when he began climbing, a nasty injury, family life and the day he successfully climbed the boulder.

In the Winter of 2002 I started to become a ‘climber’ and like many new to the sport much of my time was spent indoors. Occasionally I got out and about to the well known venues in Cumbria thanks to some keen locals at the wall steering me in the right direction. A year after I touched Northumberland sandstone for the first time. Immediately I knew this was the rock for me. The contrast to the lakes rock was profound and it really was a revelation that we could head both East and West from the Eden Valley for some pebble wresting. Ever since then I’ve barely gone for three months straight without having a visit to the country. It was always continued to inspire and push my climbing in ways that nowhere else has.

Christianbury crag lies just, just inside the Cumbrain border, tucked up on the most isolated fell in England. It’s a considerably sized crown of sandstone bedding with huge boulders and dark corridors scattered for over 500m on the fell top. Graffiti mostly from the 1800’s adorns some of the corridor walls, symbolising that this was once “somewhere” before the forest took all traces of the old Drovers road.

I’m a firm believer in sandstone being the best rock on the planet for subtle, friendly and brutally powerful features. If there is an optimum rock for the “feel” for climbing then sandstone gets more votes from me than a Russian spam bot.

As a result I am led where these outcrops take me “no place too far”. Quality experiences are in the movement when it comes to limit bouldering, Is the move something which feels fun? Sometimes moves are grizzly and graunchy you’re thankful you got “through” them”. In the best moves in climbing I’d say you are thankful you had that short millisecond of perfection in your life.

Floating up to a dead point on a perfectly textured sloper, killing a swing on the tension and powering out to another. Font is full of these feeling because the features lend themselves to insecurity and relief. It’s forging that balance whilst using power and technique, where the true quality lies myself. It is why I bother sticking with bouldering in my 30’s anyway. Waffle b******s I know but if you can’t define your own quality then you can’t really look for it and you might end up doing link ups on limestone wondering if anyone will notice your healthy scorecard. No matter where the great boulder truffle hider hid them, iv’e always been up for a snuffle. It’s taken me on lots of journeys over the years but until this year I’ve failed to capitalise on one which has always been so near yet so far fetched.

Into a black hole:

Christianbury crag first vibrated its way down my ear canal back in 2005, thanks to my Grandad. Word of google earth hadn’t reached me yet and the imagery and internet speeds were so crap in rural Cumbria that it would be years until it was even worth using. Word of mouth still ruled! At the time, I was just beginning to develop Queen crag’s modern bouldering with Chris Graham and I was as green as the crag when it came to development experience. I had asked my Grandad if he knew of any large sandstone crags on this side of the county and not one to miss a good anecdote, he regaled me a tale of a long wet slog through overgrown forest path to a hilltop of boulders and corridors of rock.

He had taken my mother and Nana up to see if they could see the wild goats. From memory the walk up put them in such a foul mood they didn’t hang about long in the clag and after a brief look round the corridors for the goats they headed home.

This sent my teenage mind whirling with visions of a hilltop Fontainbleau, crispy clean with grass everywhere and wild goats just ambling around. Just after breaking up from school in that endless long Summer, I was discovering things that I have only begun to understand now. Imagination and reality seem much akin to waves and particles to me. I got the map out and decided to take Max my 60kg Bernese for a nice little 8 mile jog. We took in a bunch of the other, more disappointing crags on the fell, saving Christinabury to the last.

I remember being kind of impressed but it didn’t really fit with my childish imagination had built it up to be. It looked slopey and hold-less on many boulders and it was all quite dirt, I snapped a few pics and we stumbled down as time was getting on. Nearing what should have been the end of the walkout, I lost all trace of the little path and was well and truly lost in the trees. I had to revert to the emergency panic back up. Run downhill fast, find a stream, run down that to a bigger one and run down that until you find a recognisable map feature. Phew! Max was so knackered he was violently shaking in the car with his panting when we got back. I was pretty done in too and I had so much to do nearer the road that I just shelved it in the back of my brain. Most importantly, it was there. I would choose that knowledge any day over being 10 – 15% stronger.

In 2007 it was all still relativity fresh in my mind as a big unknown and my mates Luke and Andy from Uni where up visiting for a random day off grid. So we stupidly drove up an open forest gate in the corsa with grass coming over the bonnet and shaved off a mile or two in return for a scratch or three. That still left about 2 miles f moorland trudging to get there.

We had a good laugh on a super calm summers day but I was left thinking, this crag is too remote to really bother with, it’s just too much effort. And to be fair there was 15 years of hard first ascents and knowledge between that thought and the reason I am writing this. So, in many ways I was right. Decisions are funny things sometimes. If I had the knowledge then and experience to see rock how I do now I would have thought a very different way, I would have seen what I was missing, but back then it was all way above my head.

By 2012’ish I had moved back to Carlisle from sheffield and Micky and Katie had set up Eden Rock in the city which provided a great base. Summers are always tricky for boulderers and whilst we have the coast and mountains nearby in Cumbria, I still felt like I was missing those good sandstone days.

We had about one visit per year until 2014 when I finally got crafty. I realised you can use another forest road and get to within 800m of the crag on good trails. This was jackpot Charlie tango and in 2014 I finally started to see Christianbury for what it could be.

The largest untapped crag left in England and abstract uniquely featured sandstone at that. The highlight of that year was Hobbie Noble Quality wise one of the top two climbs I have ever done.

By 2015 things really began to change, that part of the forest had started logging and the gate was shit more often. This sowed the seeds for a true solution. What I needed was a decent bike and some effort, but I wanted to save my effort for the rock. So, what I really needed was an Ebike. No one I knew or asked had one at the time but when it comes to getting as far from a proper road in England as you can, it was time to gamble with some volts and money.

The snag was that I had done Hobbie and there wasn’t much else up there, the really big stuff left was all too blank or too easy. Or was it? Yes it must have been … Hmmm or was it? I still favoured other venues and choices closer to tarmac, even in the Summers. Everyone has lazy bones somewhere, mine are just a lot larger than Iain Smalls or Dave Macleods.

Keep an eye out for part 2 coming soon!

You can check out Dan’s athlete profile here.