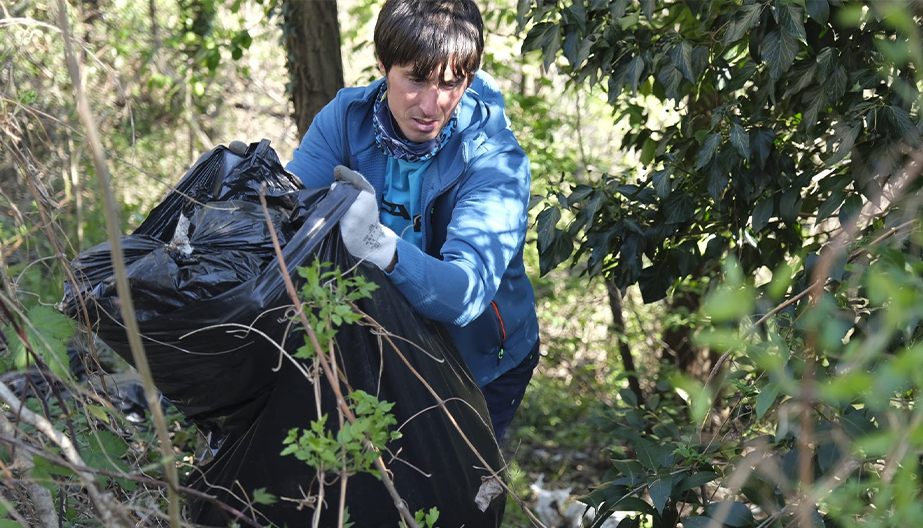 Clean and climb: Travel and rock climbing often go hand in hand. The curiosity to explore a place never seen before and to meet new people combines with the discovery of movements on the rock, one step at a time. However, the latest trip made by Matteo Della Bordella, one of Italy’s top mountaineers, was exceptional.

There are obviously rock faces to be visited and climbed, and people to meet, but on this occasion, the idea – the pretext for the trip – isn’t all about that colourful slice of rock or the famous route you tackle. Matteo Della Bordella and Massimo Faletti set out with the pretext (and the desire) to clear rubbish from Italy’s trails, woods and rocks. But between one sack of rubbish and the next, of course, they found time for a few pitches!

Everyone who loves the mountains can make a difference. We asked Matteo to tell us more about his green project, Clean and Climb…

“Yes, Clean and Climb, or Climb and Clean, we haven’t decided on the order yet; Massimo keeps changing his mind! But ultimately the name isn’t so important!” The first chapter of Matteo Della Bordella and Massimo Faletti’s green project to give back to the environment, in exchange for all the fabulous days spent in natural spaces.”

Absolutely! Tell us how and when the idea came about.

“Two years ago Massimo Faletti and I were in Pakistan. We’d just set a fantastic route on a wild rock face… The summit was more than 5,000 metres, incredible and as yet unclimbed. We felt really fortunate to be there, in that beautiful valley surrounded by nature. Max asked me what I thought about us doing something for nature for once, in view of all the joy it’s given us. We wanted to give something back, reciprocate in our own small way. It took a while to move from the idea to the action, as always when you have a lot going on in your head. But now we’ve done it: Clean and Climb is a reality!”

You’re mountaineers and climbers, so you’re familiar with all altitudes, from sea cliffs to high glaciers. Sadly, there’s rubbish everywhere. Where did you start?

“We know very well that the issue of rubbish is widespread at all altitudes and all latitudes. We chose places that are easy to reach in order to spread the message that Clean and Climb isn’t for just a few people, but within reach of everyone. Anyone who loves the outdoors and the mountains – not just mountaineers and climbers, but walkers too – can make a difference! By taking their litter home and picking up what they find, anyone can leave their favourite natural spaces better than they were before. Crags used for sport climbing are the most accessible places where the number of visitors is higher, so we decided to start there.” On the crags you visited, you didn’t find much rubbish left by walkers and climbers, right?

“That’s right. In general, people who spend time outdoors and in the mountains tend to be virtuous individuals who care about the environment. There’s some rubbish, it’s true, but it’s not our intention to point the finger at anyone. However, what we want to do, with our work and our videos, is raise awareness among people who are less interested in the issue.

Why did you choose crags in Trentino and Sicily to clean?

“We liked the idea of beginning by cleaning our ‘own house’, so – since Massimo is from Trento – we started with a nearby crag, Forti di Civezzano. Then we headed to Sicily to symbolically bring the whole of Italy together, engaged in the same issue. In Sicily, we went to Buccheri, because Massimo has some friends there who told us about a lot of rubbish on the crag. Then we went to San Vito Lo Capo, the most celebrated climbing spot in the region.” 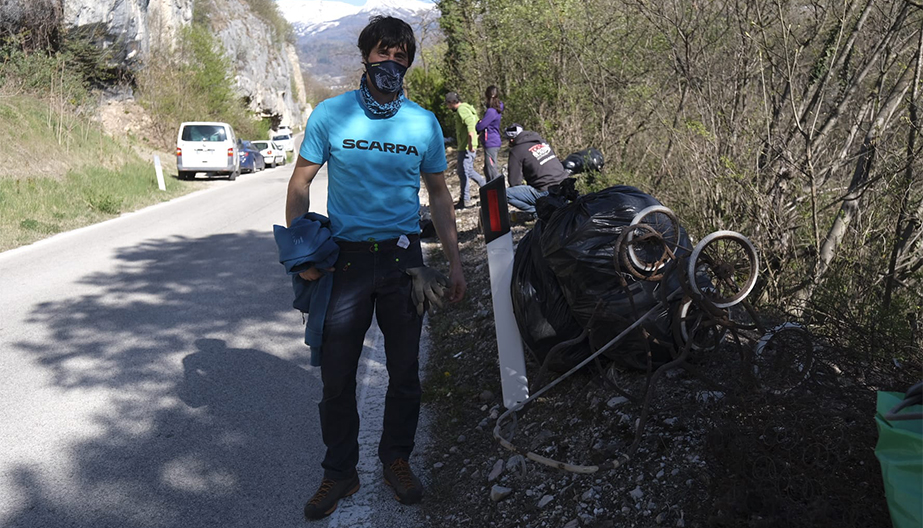 “In Trento, we found a lot of white goods, from toasters to fridges and televisions. And my question is: why chuck them in the woods? But while in Trento some people threw their rubbish out of cars, in Buccheri in the old days they just threw the cars over the cliff! We used hoists and pulleys – like the ones they use to rescue you if you fall down a crevasse – to lift car chassis and sheets of rusty tin, which we took to be recycled. At San Vito, on the other hand, we found a lot of clothes, slippers and shoes. Sadly they hadn’t been abandoned, they belonged to people shipwrecked on refugee boats. Learning about that story was truly touching and very sad…”

A reminder that not every journey is a wonderful adventure, and rubbish isn’t the only problem…

Apart from spending time on the crags, you had to travel to reach them. What did you do about travelling around Italy?

“We travelled by train and electric car to limit carbon dioxide emissions as much as possible. We reckoned it was really absurd to pollute while cleaning! So we travelled the sustainable way. It’s true that crossing Italy by train isn’t exactly quick, but it was restful and relaxing.” “I started off in pretty good form: in Trento, I flashed several 8as without a problem (as many as three in one afternoon). On our last day in San Vito, I didn’t flash a single one! Let’s say the level gradually fell because the days we spent cleaning were physically demanding. Also, we were moving frequently, without much dead time. However, in Syracuse, we saw some really amazing and little-known crags… I hope to go back there soon!”

Have you already planned part two of Clean and Climb?

“Our idea is to create an annual gathering, but that doesn’t mean there won’t be other pop-up events happening. Unfortunately, because of the current health situation, we haven’t been able to expand the project much. This time there were only small groups of local friends, but in the future we want to broaden the event. The issue of rubbish brings together different people with the same passion for nature, and that sharing is the best thing about it!”

Thanks Matteo, and congratulations on your green efforts for the environment; see you next spring.