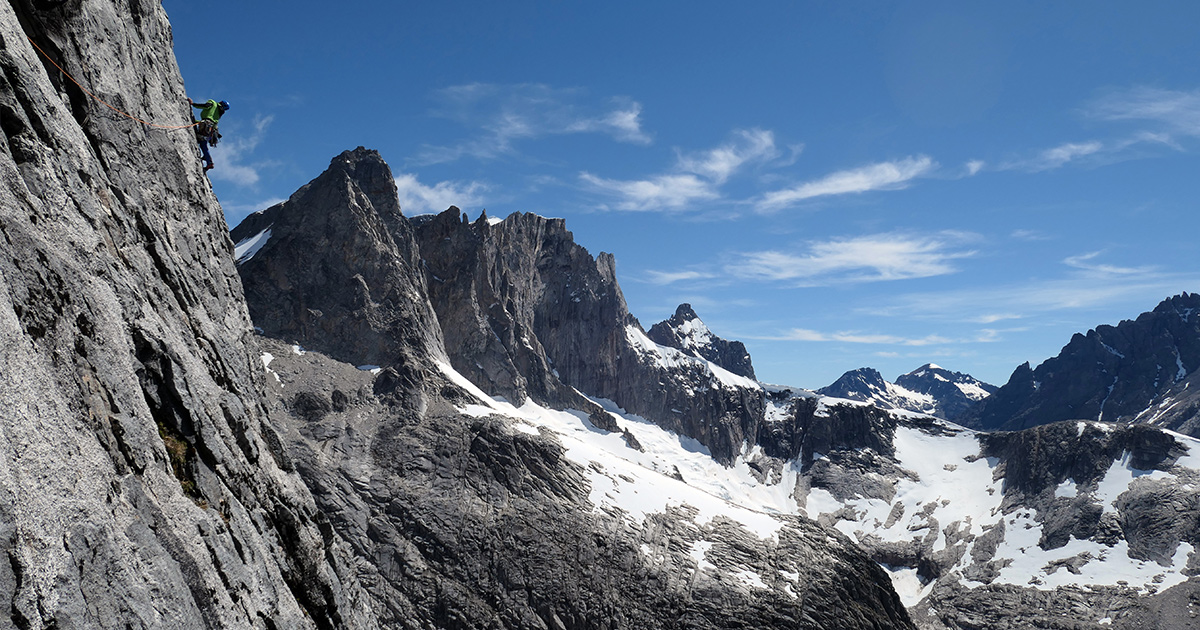 Recently arriving back from an incredible 3 weeks in Chilean Patagonia, completing some new big climbs. Our Athletes Will Sim and John Mccune have some smiles on their faces after living out an expedition that was conceived last year on a drizzly autumn day in Llanberis. In this article, Will Sim gives us an account of some of the dream climbing he and John experienced over in South America.

It was 3 years ago, on a drizzly, grey, autumn’s day when my friend John Crook came round to where I was living in Llanberis. Without much surprise to anyone who knows John, he came armed not just with psyche to find dry rock amongst the penetrating drizzle, but also with fresh stories from far-flung adventures that had come to pass since we’d last seen each other.

That evening sat in the little house on Snowdon street, John showed me hundreds of photos of exploratory climbing in the Andes and Patagonia that had me squirming around restlessly on the sofa in excited jealousy…. Jungle bashing to access unclimbed crags, huge dolerite columns like a photoshopped Giant’s Causeway, big Andean ice faces, but most of all, a picture of a conical tower-slash-big wall in a remote, almost untouched range of Chilean Patagonia. 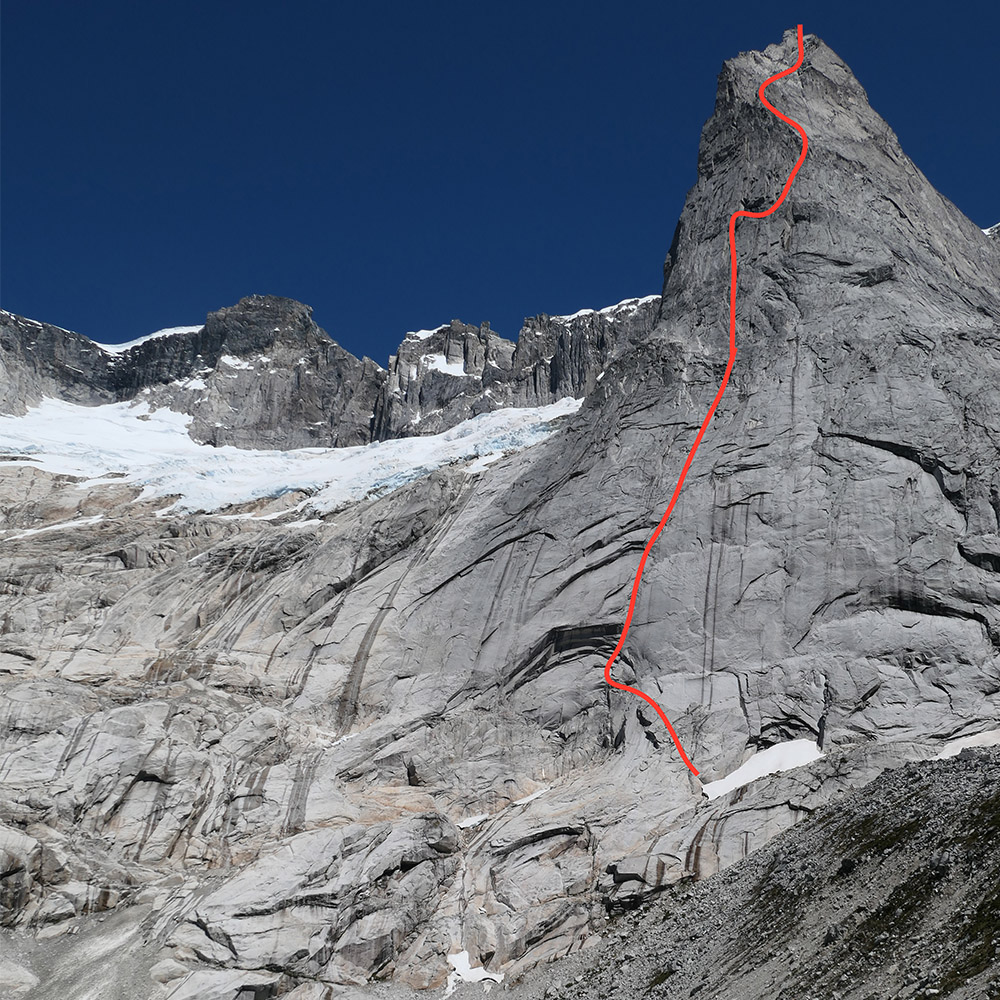 John returned a year later and attempted the “Conical tower-slash-big-wall” once again, but hard climbing and the harder weather turned him around.

While talking about trips and ideas on a wet rest day between guiding work this summer with John Mccune and Paul Swail, the image of the Avellano tower crept back into my mind. It was somewhat serendipitous that John Crook ended up around my apartment the very same evening. Minimal persuasion later we had a rough plan hatched. John, John, Paul and myself chatted about dates for about one minute, realised we could all do it, and that was that.

In all it took us ten days from arriving in Chile to reach our basecamp beneath the wall. A very rough boat ride across Lago General Carrera saw the team separated with John, Paul and myself on one side of South America’s second largest lake, and John Crook and Ruth on the other, unable to recross due to high winds and waves. Thankfully we were taken in by a nearby Gaucho until the next morning. 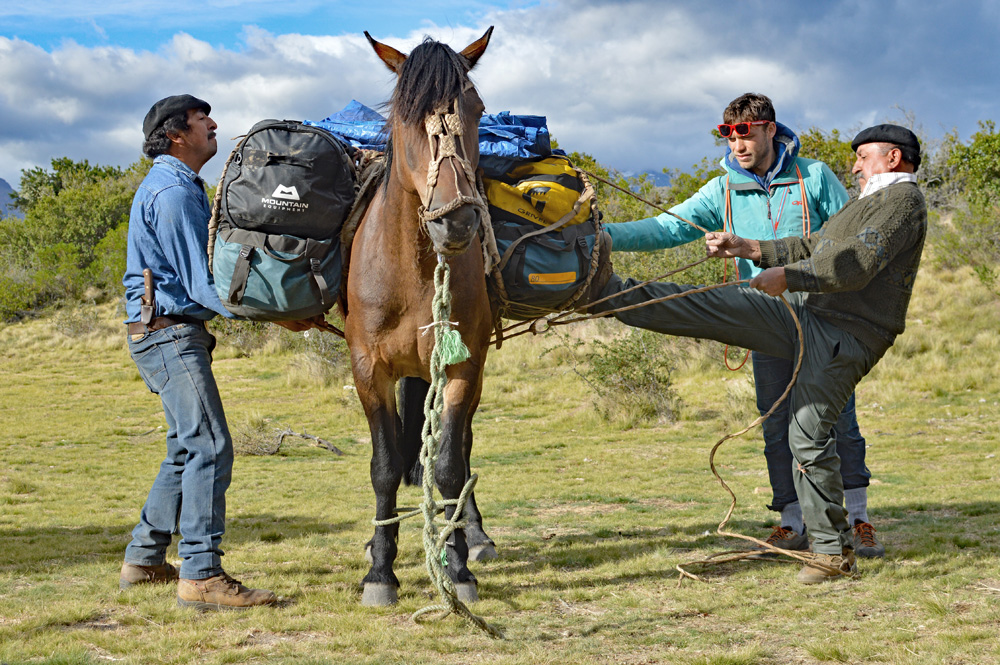 After regrouping on the north shore of the lake we walked for 4-5 days with the help of our new gaucho friend Luis and his horses. The last two or three days of the approach were load carrying relays where the ground was too rough for Luis’ horses. Throughout this period the weather was pretty bad and we didn’t get a glimpse of the South Avellano tower until we were nearly at base camp. 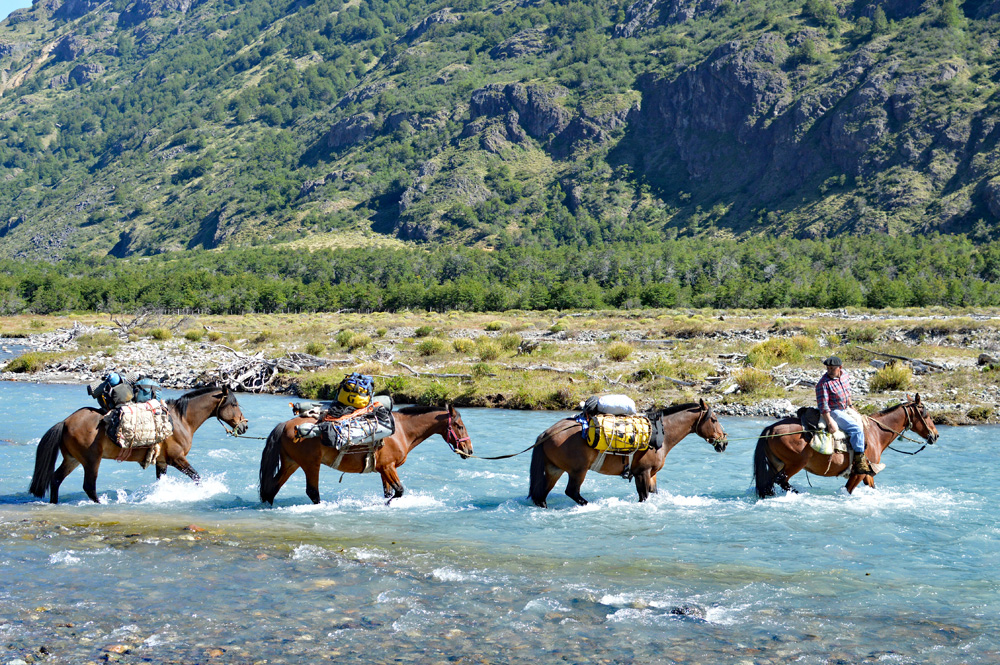 A river crossing during the 5 day walk in

With improving weather we were all itching to get on to the wall. Some aid was required to get through wet cracks (freed when dry), but after two days of toiling on the lower slabs we had gained the ledges at 400 metres and it was time to haul our stuff up to this point.

“We had a dilemma; to go heavy and slow and get up the wall in a “big wall” style, or just go for it in a light and fast push”

However, with a forecast giving two more days of great weather, followed by deterioration, we had a dilemma; to go heavy and slow and get up the wall in a “big wall” style, or just go for it in a light and fast push  – a style we were all more familiar with. After some thought, we realised that it would be stupid to use good weather simply to haul heavy weights up to our high point, and so we went for it.

Chilling In the Shadow of the Tower

A 2a.m. start from basecamp saw us up our fixed ropes to that start of the meat of the wall – a large, forbidding corner and chimney we all half expected to shut us down. To our amazement we managed to outflank it through improbably blank ground to the left. We snaked through the line of least resistance and gained the more broken upper reaches of the wall in a “is this really gonna go?” kind of haze.

“The route had been about 900-1000 metres long and every pitch had gone free. E5 seems about right, give or take a grade or two….”

The summit was windy and anticlimactic as they often are. 1000 metres of abseiling with a badly damaged rope got us to the base just before the heavens opened and drenched us on our walk back to basecamp. 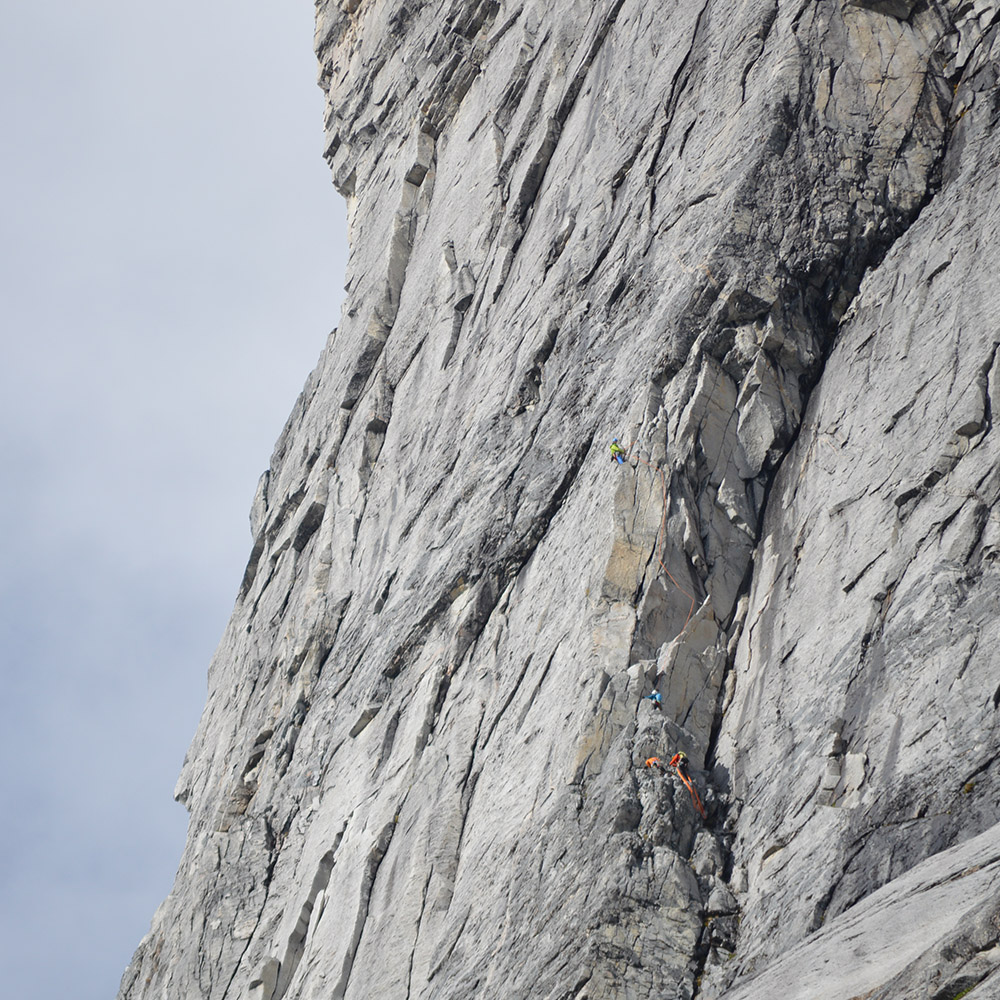 John Paul and Will going ‘fast and light’

We were all in disbelief that our main objective had been achieved after only three days effort, we had half expected it to take us up to ten – taking into account bad weather – and had come equipped with portaledges to give us options. I think the fact that we knocked off the South Tower so fast was partly due to the luck of the weather changing for the better just when we were ready to launch. But also due to the groundwork that John, Will Harris, Dave Brown and Andy Reeve had made in the previous attempts. Thanks, boys! 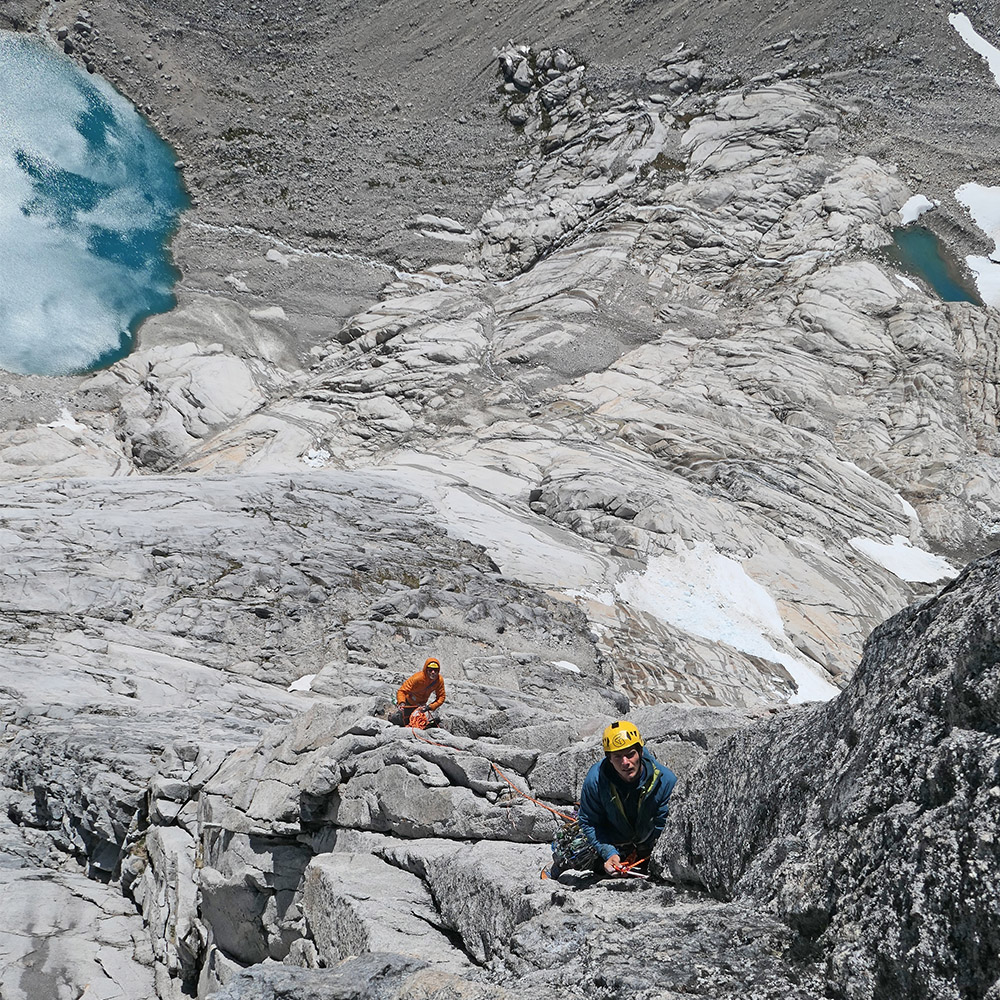 One of the incredible initial pitches of the South Avellano Tower

With two weeks of food left in basecamp, and high spirits it was a nice feeling to know that anything else we climbed was a bonus, yet there were plenty of plums for the picking.

“We strolled around on the windless summit for a few minutes in Patagonian perfection before beginning the descent.”

Once our bodies had recovered from the south tower, myself John and Paul made the first ascent of a beautiful route on an attractive mountain we got to know as “Cerro Squareface” (actual name unsure?). The climax of this fantastic route was a dream splitter crack that felt about E5 6b and was too good to be true. We strolled around on the windless summit for a few minutes in Patagonian perfection before beginning the descent. 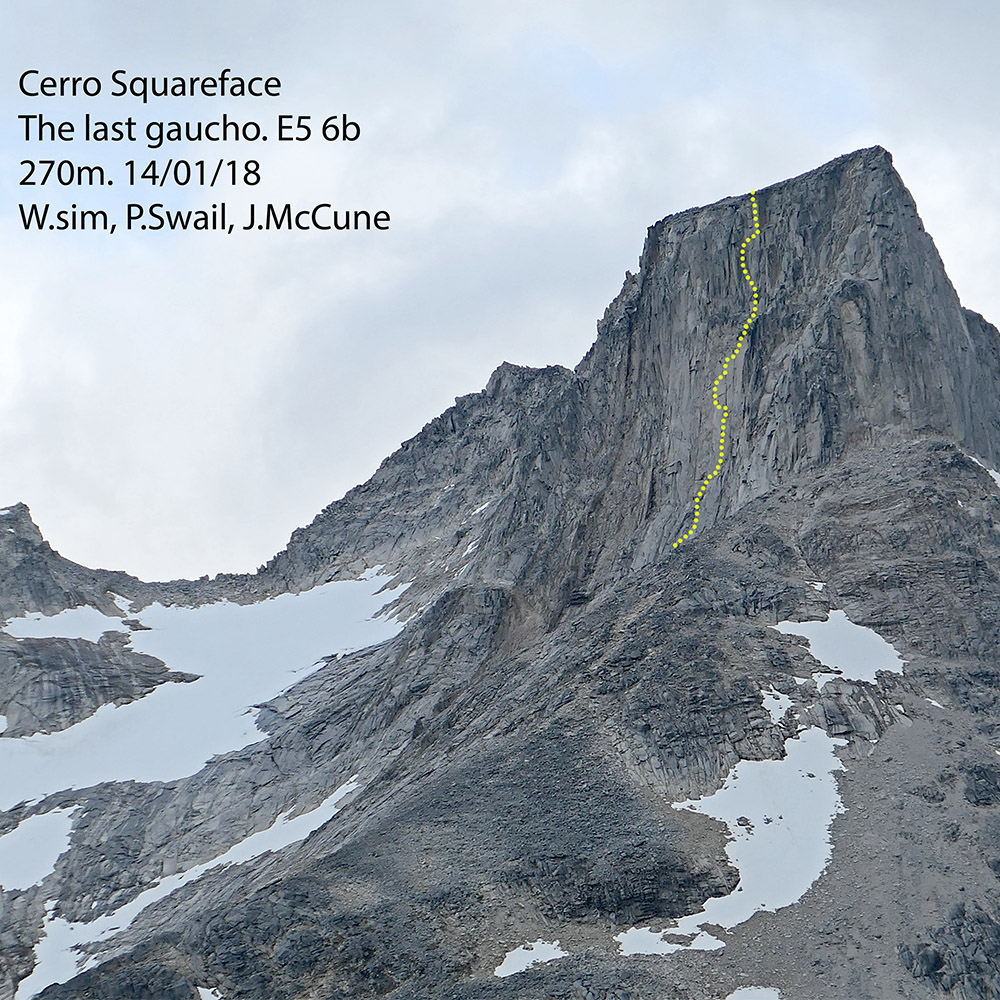 The Last Gaucho E5 6b

A few days later again John, Paul and myself made another first ascent. This time it was a ridge/spur of classic alpine appearance sporting a worrying looking final tower which we had heard rumours of being attempted previously by an American team.

Sure enough, after several hundred metres of serious feeling ridge traversing, the final tower reared above us in a worrying leaning nature. I was dealt with the sharp end and after some scary steep fist jamming through more death-blocks than I like to admit, I rolled on to the summit after completing yet another fantastic, virgin line. The Mestizo ridge. 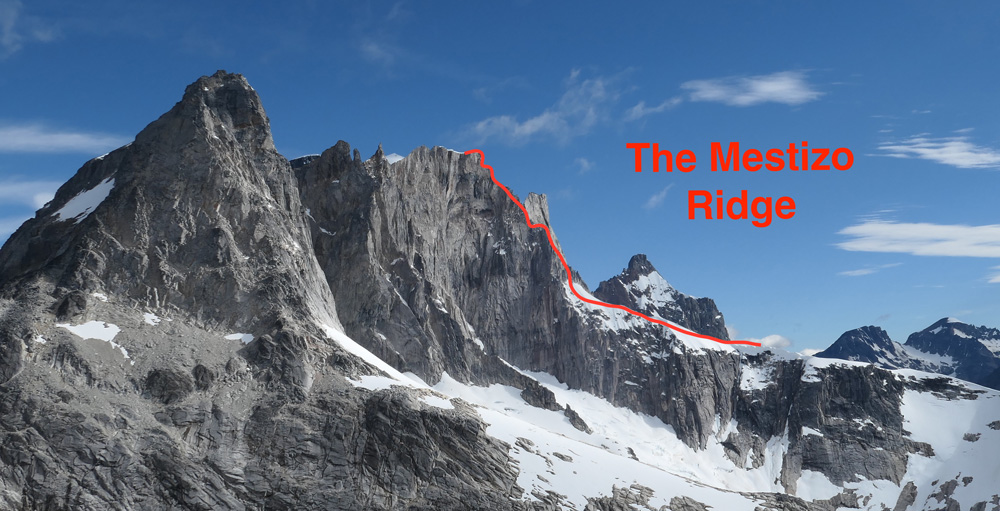 Our last climbing of the trip was spent trying to repeat our own route up the south tower’s east face, but going even more direct in a place we’d spotted a crack with binoculars. Unfortunately, it wasn’t to be as the heavens opened on us halfway up the wall. It was the only day of the trip that the forecast was wrong, but we couldn’t complain given the trip we had had. 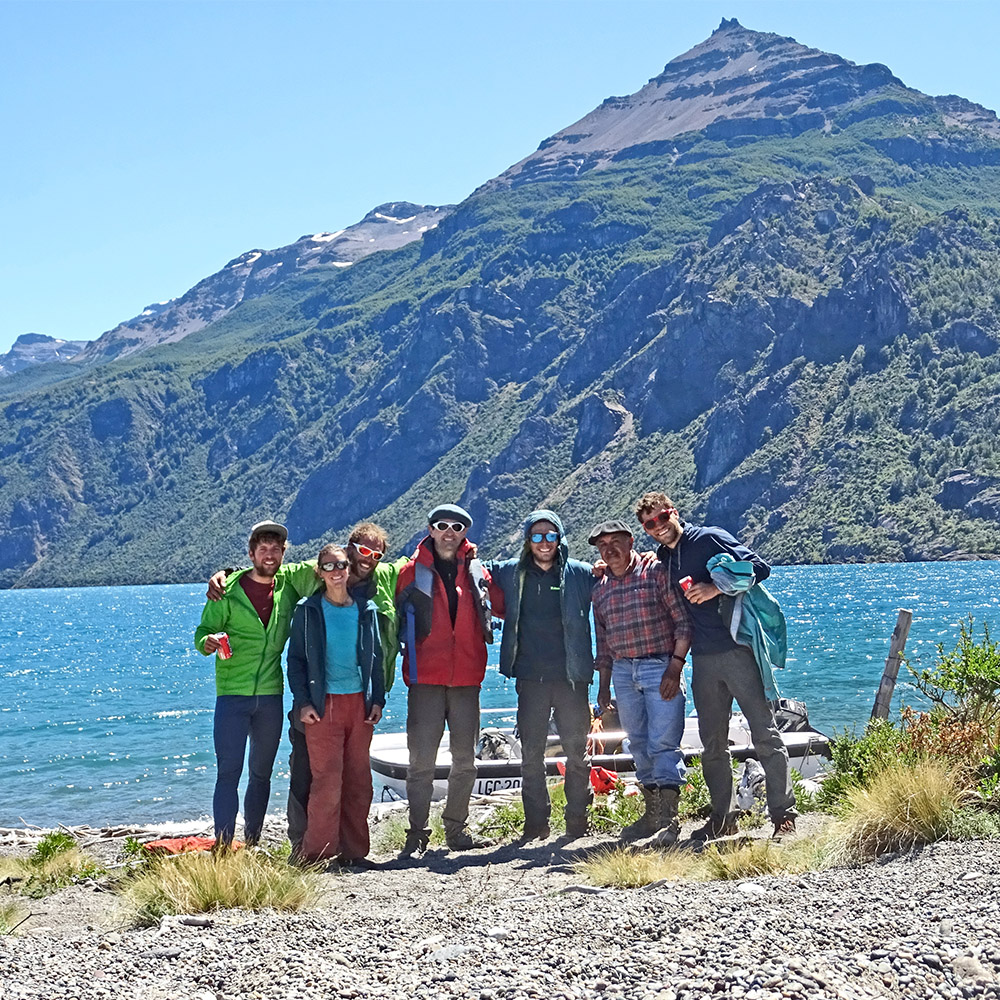 We reversed the load carrying of the approach and met up with Luis and his horses for the walk out to the lake. Hunger had well and truly set in now that we had exhausted nearly all of our provisions, but we didn’t care, we’d just had 3 weeks of dream climbing in a barely explored Patagonian paradise.

With time to spare before catching our flights back to Europe, we relocated to Cerro Colorado. This huge dolerite column protrudes from the Chilean desert just south-east of Lago General Carrera. Here we made some more first ascents. But that’s a whole other story….

Words courtesy of Will Sim. Photography provided by John Mccune.

Read more about the inception of this expedition in the “Llanberis to Patagonia” Blog article.

To get more information on Will Sim and John Mccune have a read of their  Scarpa Team profiles.