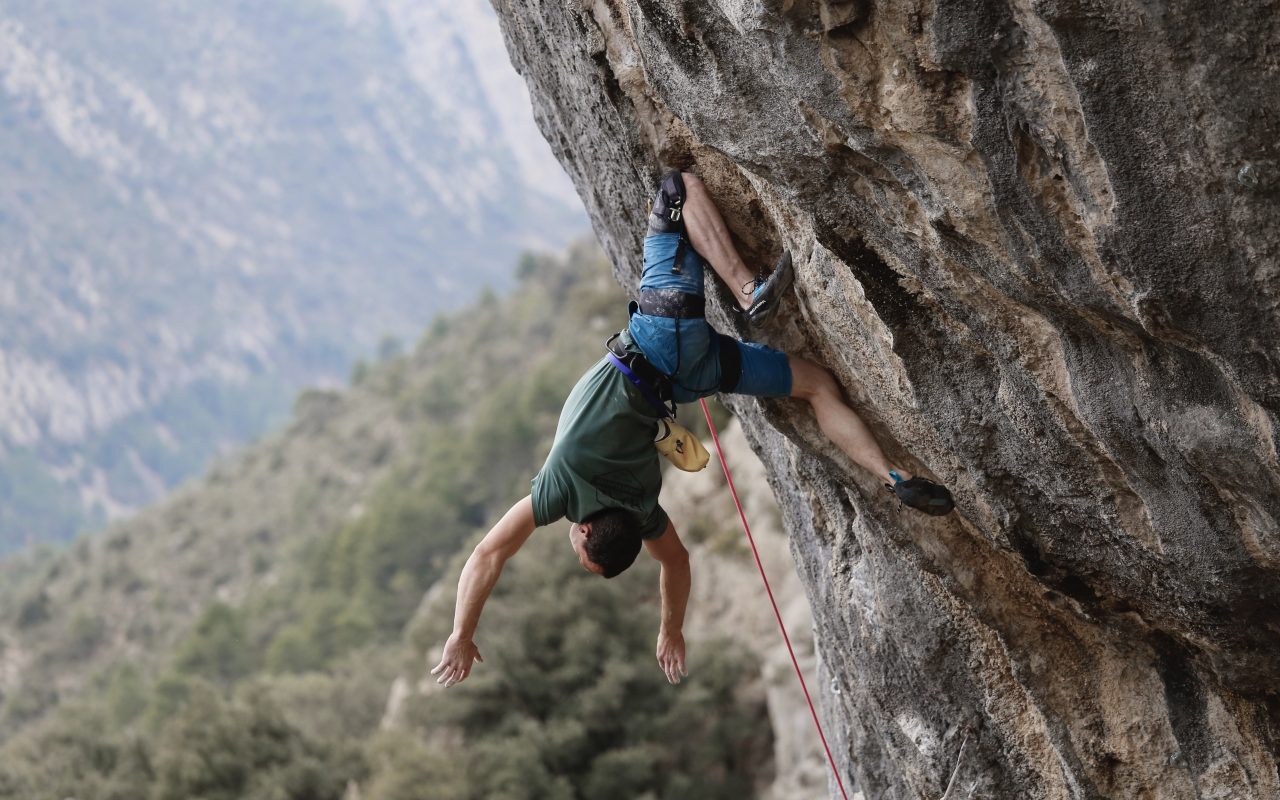 Over the winter Scarpa Athlete Angus Kille set himself a challenge. Angus headed out to Spain with a sport project in mind: Esclatamasters, a 9a in the foothills of the Catalan Pyrenees. Read on to find out how Angus got on…

A few months ago, I went looking for a climb I was willing to fail on. Well, more specifically, a sport project so hard I didn’t mind failing on it. I found that in a line of stunning blue-grey limestone called Esclatamasters, a 9a in the foothills of the Catalan Pyrenees. The route is a real stunner, and the grade was hard to ignore – a sort of threshold grade I always thought was reserved for Jedi climbers that were raised in climbing gyms.

The first half of Esclatamasters is shockingly steep – you drop knees between rough sidepulls left and right, throw for a few crimps and then hang from a kneebar to get some weight off your arms. After that the route changes style completely: you move precisely between small, rough crimps without resting on the still-steep headwall. You have to be good at both styles – steep and techy – and need fingers and shoes for both. It’s also the perfect setting: an isolated valley where the dry air smells faintly of rosemary and all you can hear is the tweeting of birds and the occasional power scream.

My partner Hazel and I spent a very Welsh winter hiding from the cold and rain in our training loft, preparing for the route. Apart from training, practicing, resting and climbing, the whole process was also full of doubt. Of course, that’s exactly what I signed up for, but when we returned to Catalunya in February I felt quite different about it all: I was suddenly very nervous to fail.

I’m by no means too good a climber to fail on a 9a, but after investing a few months of my climbing life into this route I was anxious for it all to pay off. I noticed my focus shift from the progress I had made to the progress I needed to make; I began counting how few climbing days I had left rather than all the good days I’d had; I caught myself thinking about the end goal rather than enjoying the process.

It’s not that much fun trying to enjoy something that hasn’t happened yet, and that’s kind of what being goal-orientated is like. It felt like my mindset had slipped on something unexpected and I needed to fight hard to stay in balance.

That meant not constantly daydreaming about the route, not obsessively rehearsing the moves or being too preoccupied with anything that might affect my chances, but most of all it meant not being too attached to the outcome. Climbing the route actually became an escape from worrying about climbing the route. I would climb the bottom half perfectly, hang out in the kneebar keeping my focus and then pull halfway through the headwall before peeling off. My mind would then flip back to the failure and the distant idea of sending the route.

Of course, sending wasn’t my only goal. I wanted to be a better climber, learn more about climbing (and myself), get comfortable with failing and managing my fear of it. Sending 9a wouldn’t mean much if I didn’t enjoy it, so I turned my focus around and worked on my head.

I didn’t fix my mindset overnight; I continued falling, struggling and failing, gradually managing the process a little better but not really getting any higher on the route. I got tired, a bit ill, Spanish weather let me down and I had the hard lesson of watching my girlfriend send the route in perfect style.

There was nothing very linear about the process; a neater narrative would have probably made a better story and would have been much easier to deal with in my head. But there’s more than one challenge in doing something harder than you’ve ever done before and you don’t really get to chose how it plays out.

Over several weeks I applied myself assiduously to every aspect of the project, which was pretty consuming when I realised anything could conceivably affect my performance. It was exhausting. A little bit of ‘letting go’ one day, some extra fitness and impeccable focus allowed me to hold on a little differently and take a more natural body position.

I had one of the best moments I’ve had in climbing and fell, with pleasure, at the top of my project. I put all the work in again two days later, didn’t miss a move or lose any focus, and moved as fluidly as ever over that perfect bit of rock. I was genuinely confused to find myself at the top of my route, wondering how I had got there.

It’s a good thing I don’t only enjoy getting to the top of things as I wouldn’t have enjoyed much of this process otherwise. I was still pretty chuffed to get to the top and my heart still races when I watch the video again. I chose this project as a challenge to work on my mental training, to be comfortable with failure, but it was a harsh reminder that you don’t always get to pick your challenges – I didn’t know failure would look quite like that, that I would be struggling with weather, fatigue or my head quite the way I did.

I still feel like a bit of an imposter when someone congratulates me on ‘the 9a’, but it also feels pretty simplistic to reduce the whole experience down to something so basic and abstract. It’s taken me a lot more than two characters to describe this process, and I think I’ll take a lot more than ‘9a’ away from it too. Most of all, I’m hopefully a little wiser and definitely a little humbler than before.