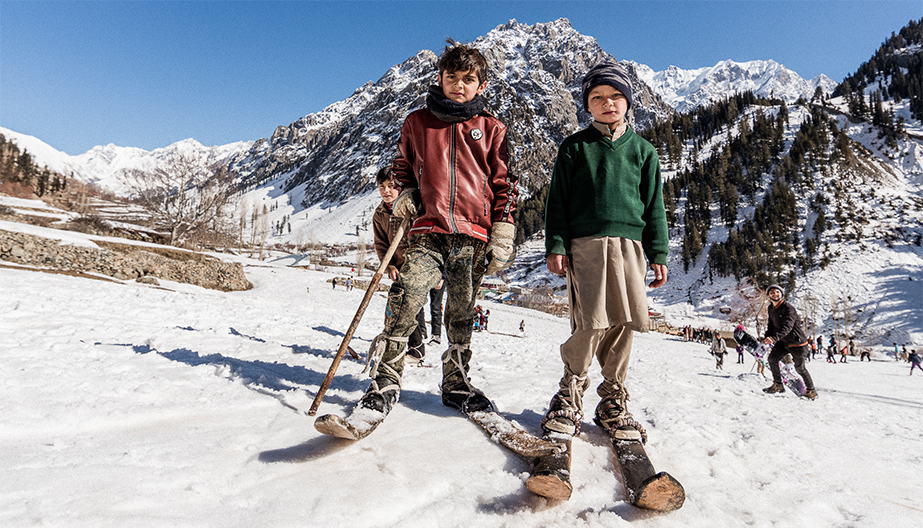 Introducing the locals to mountain sports: What is it that prompts us to embark on a mountaineering expedition?

Sometimes, all it takes is a friend telling us about their trip, an article in a magazine, or a photo that we come across in some book or other. That sows the seed of the dream, it steadily grows and, as soon as the opportunity presents itself, we set off to discover how to make it a reality.

The mountaineer is enthralled by that mountain, so far away yet so beautiful in its simplicity that it justifies a trip to the other side of the world. Of course, travelling is a great excuse to discover a different culture, visit far-flung countries and meet new people, but those who set off armed with crampons and ice picks usually make their way around the world in search of incredible cliff faces and peaks. That, however, is not always the case: this time, Mathieu Maynadier’s intention on his visit to Pakistan a few months ago was to bring the local population a little closer to skiing, both as a sport and as a means of transport.

We got in touch with Mathieu to ask him what prompted this journey and how a star mountaineer like him felt about dedicating his time and hard work to others rather than sinking them into his personal projects.

Hi Mathieu! Could you tell us why you decided to embark on this unusual ‘expedition’?

“This trip was organised by Zom Connection, an association set up by Julien Herry, a French snowboarder. The first time I visited the Hunza region of Pakistan was to ski – actually, with Julien – many years ago. After that, I returned to Pakistan seven more times, mainly for classic mountaineering expeditions (Latok twice, Gasherbrum twice, climbing in the Khondus area, etc.).

I can’t deny it: most of the trips I’ve taken have been for my personal mountaineering goals, all selfishly focused on me and my plans. But it had always crossed my mind that we mountaineers should somehow help the Pakistani people to enjoy the tourism that is so closely linked to their mountains and their lives.

This year, my eyes were really opened to just how limited these people’s access to mountain sports is. From now on, I want to do something for them after every one of my trips: this summer, for example, after my expedition to Hunza, I’ll be sticking around for a few extra weeks bolting crags and teaching the locals how to climb.”

Whose idea was this trip originally?

“The initial idea came from Julien Herry – though we call him ‘Pica’ – whom I mentioned earlier. A few years ago, Pica had an accident whilst he was snowboarding in the Pakistani region of Hunza. Whilst he was being treated in Islamabad, he met a few local skiers who were interested in getting to know him and having some sort of cultural exchange. Pica was also contacted by the Hindu Kush ski club, which promotes winter sports in the Chitral area. So they asked us to share our expertise and experience with them and invited us to Madaklasht…

Madaklasht is a tiny village a million miles from everything which the English used to visit in the 1930s as a sort of early ski resort. Since then, the locals have become more curious and enthusiastic about this new sport, and started building wooden skis for themselves. When they heard that some French people had come to Pakistan to ski, they immediately got in touch with Pica and asked him to visit their village and be part of their ski and snowboard festival. Pica asked me to come along and… the rest is history! The trip was already half organised!”

So what would you say the main objective of this trip was?

“We wanted to offer the local population an excuse to have fun and show them the ropes! We brought plenty of ski gear because we wanted to make sure we could make the sport accessible to all the people of Madaklast. So we set up a storage centre of sorts and took on a few guys to manage it. Then came the time to train these aspiring skiers in safety and technique, as well as how to maintain the equipment.”

What kind of feedback did you get from the people of Madaklast?

I would say it was very positive, although I must admit that the cultural differences were a little difficult to negotiate at times. Nonetheless, the interest that the people showed in what we were doing and the way they welcomed us and took care of us said more than any feedback ever could. We were all on the same wavelength and managed to strike up a really wonderful bond. They’ve been sending us messages and photos every day since we came back to Europe. I think that’s proof of their gratitude and how much they appreciated our visit and the hard work we put in for them.”

Are you thinking of going back there in the future, then?

“Absolutely! I’d like to work on promoting vertical sports of all kinds: rock climbing this summer and ice climbing next January. After that, I hope to get another opportunity to ski with the people of Madaklast in the next few years and see how things have progressed since we laid the groundwork on this past trip.”

​​​​​​​
How did it make you feel as compared with a normal expedition?

“It was something else entirely! This trip was definitely the most emotional one I’ve ever had, just filled with human relationships. During an expedition, everything happens so quickly, and you have to keep your eyes on the prize at all times – it’s tough to really make room for anything else. But this time, we spent two weeks with the local population, living as they do, together with them.

The warmth with which they welcomed us and the passion that they pour into everything they do were incredible. It was also a unique experience for me to see how the people in those remote villages live through the winter season, with all the associated problems and complications that we often don’t think twice about.”

“I was absolutely wrecked, completely drained – 8000m peaks aren’t a patch on a trip like that. The trip was far more enriching and intense than I could ever have imagined. These kinds of experiences make you reconsider what you’re doing with your life, what your purpose is on this earth, what you want to achieve and why…”.