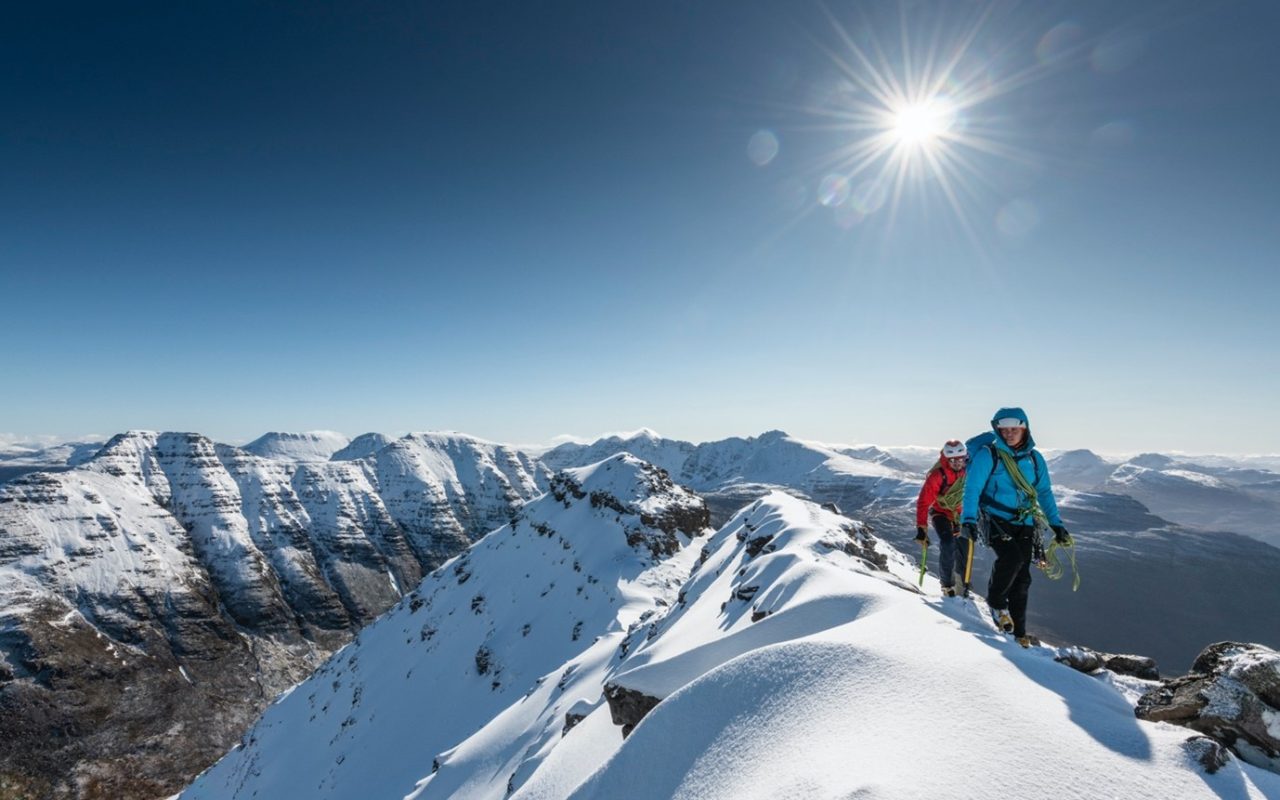 Just over a year ago photographer Ed Smith headed off on a shoot to photograph the new Scarpa Manta Tech in the Scottish highlands. Little did we know what lie ahead of us and this trip would be the last outdoors before the UK went into national lock down. Here Ed recounts this last trip when we were all blissfully unaware of what the year ahead would look like.

“In early March 2020 a small team of three set out on a traverse of the Horns of Alligin on a mission to photograph the new Scarpa Manta Tech. We could never have predicted the lasting positive impact of this incredible mountain.

Chasing light in the mountains on an adventure photography shoot is an immersive passion. The hint of light on the horizon at 4am is the building wave that I’m watching and waiting for, hoping to get in sync with. My senses are alert and adrenaline is pumping as the light picks us up and the journey begins.

Lacing our boots up at 4am my eyes trace the horizon in delight. There is nothing above our heads other than the depth of the sky beyond: the wave is building and it looks like a beauty. Our head torches channel us into tracks winding through trees which give way to moorland. The sound of the burn to our left tunes our senses to the landscape beyond and we make fast progress. Three bright dots move between the expansive ranges of Liathach to our right and the ridge line of Beinn Alligin looming ever closer to our left.

Matt and Ella’s company makes for a swift walk-in as chat flows with their passion for this wilderness. They’ve both had a very full winter of ice climbing and it’s clear that no ceiling is in sight for either of their capabilities. Whilst Matt and I are fresh, Ella has spent the day prior amongst the iced rock faces of the mountains to our east, but you wouldn’t know it. Nor would you know that she has spent a chunk of the winter with an injury which has caused one of her ankles to be known as ‘The Fankle’. Suggesting rest days to either of them in anything short of a wet blizzard would be to misjudge the spirit with which they approach the mountains.

The horizon glows, the wave approaches. At the base of Deep South Gully we gear up: helmets, harnesses, crampons on. I start lining up my first photographs of the Manta Techs being used in anger. In the lower stretch of the gully we are out of the sunlight but I can tell we’re going to catch this wave. We make fast progress on our ascent through untouched snow and the gully steepens.

“An incredible day in the mountains with inspiring people”

The natural sensation of picking up a wave is simply beautiful: effortless momentum with nature’s energy and power at your back. As the gully relinquished its grip onto an upper snowfield I’m certain we all felt that we had been picked up by that wave. The sun projected a sharp silhouette of the gully wall onto the snow and we each radiated the energy surrounding us and the joy of our environment. The pictures captured became as much about an incredible day in the mountains with inspiring people as they were about a legendary pair of boots with an epic history.

Progress along the traverse meant balancing photo duties with the sheer exhilaration of the conditions beneath our feet and above our heads. Still early, the sun arched around us through a sea of cerulean blue skies highlighting views along the way. To convey the pristine feel of the conditions I’d cut a wider traverse from the crest at certain points to avoid disturbing snow in the foreground of images of Ella and Matt. Spare moments were filled with chat of potential ice routes on the surrounding faces and future missions.

On the summit of Sgurr Mor we hit our highest altitude of the day in line with the sun overhead. Feeling the touch of heat on our faces there was no doubting the timely presence of the scene around us and we took the opportunity to dine with a view. I also used a quiet moment to capture portraits of my friends on the hill, something I haven’t done enough of over the years in this gig. Going forwards I’ve resolved to never leave the mountain, hill, trail, water or wherever I may be without pictures of the friends who have been with me on the journey.

Carving what was left of our wave we moved along the final ridge to Tom na Gruagaich. This offered opportunity to put the finishing touches to my set of images whilst Matt and Ella’s banter descended into who had looked the most majestic amongst this exalted route on such a day. Whilst the sky held a mesmerising depth, its intensity softened the snow of our descent. We embraced gravity and glissaded down sections of Coire nan Laogh to rapturous laughter; the first would cut a toboggan line for the second, and third, to arrive with increasing momentum and rolling.

Packing into the car for the journey home we recounted an incredible location and day. Our perseverance through a mixed winter of temperature spikes and storms had paid off. Listening to the radio as we cruised back towards town, however, the newsreader spoke of a different kind of storm. We had ridden an ultimate wave at a perfect moment to carry momentum and positive mindset into unprecedented times.

I felt the benefit of time in the mountains and wilderness profoundly whilst editing the pictures of that day from the confines of a home office during lockdown. The memory was a boost of positivity which I channelled into every permitted moment to leap outside to run and bike and keep that wave going. Whilst many things have changed as we bridge into a new year and a fresh winter some things remain constant; for those drawn to the mountains the energy we gain amongst summits far outweighs the energy we expend. To be able to channel that into every stride of every adventure is a mighty powerful thing.”

Many thanks to Ella Wright, Matt Pavitt, Mountain Boot Co. and Scarpa boots.

Find out more about the Scarpa Manta Tech here