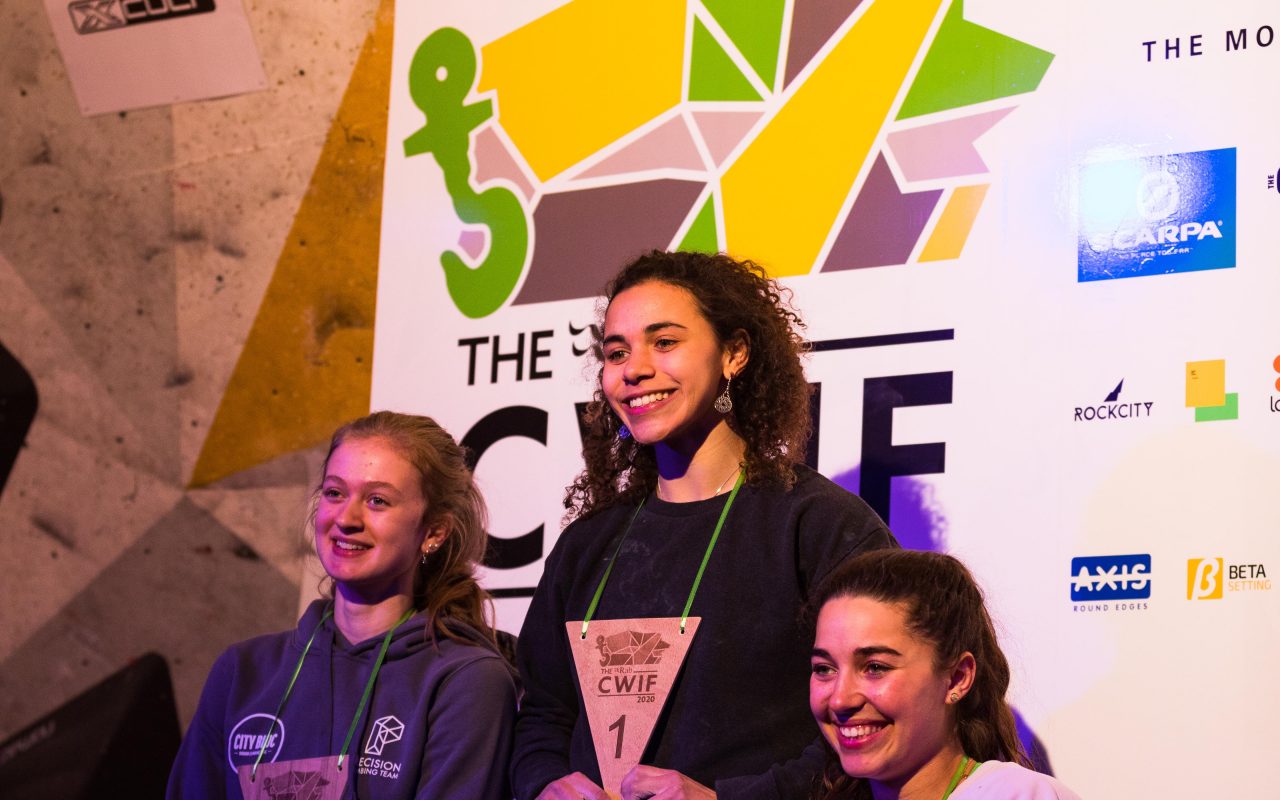 SCARPA athlete Molly Thompson Smith recently won the CWIF (The Climbing Works International Festival) in Sheffield, not bad for someone who hadn’t intended to originally enter the competition. Here we catch up with her about the weekend.

“I’ve been competing in The CWIF for several years now, and when I couldn’t two years ago due to injury, I was on the mats brushing holds during the semi-final round! The CWIF has solidified its place on the competition calendar as the season opener – a final training test and glimpse of who to watch throughout the season to come. It’s renowned for it’s own style – 30 qualification blocs where I personally find the easier problems the hardest! Corners, jumps, squirming, tech… hand jams even! CWIF qualification really looks for all rounded climbers. The semi and final follow the World Cup format on the competition wall at the Climbing Works and usually this is more my style; a mixture of basic comp tekkers with some plain and simple pulling.

This year’s competition was clouded with a strange atmosphere due to the current pandemic that is COVID-19. Up until a week ago I was planning on being a spectator at the CWIF – even funnier, I was planning on streaming the finals from my sofa as the event was so popular tickets sold out before I could even click purchase! My main focus for the first half of this year was the European Championships/ Continental Olympic Qualifier scheduled to happen pretty much right now, but less than a week before my flight the IFSC made the sensible and unavoidable decision to postpone the event to June.

I was 100% behind the decision – of course it’s disappointing to put a lot of hard work in for something that doesn’t go ahead, but health is by far the priority here and sport will be there once we’re all on the other side of this. I knew the CWIF was likely to be the last event before the worst of the virus hit us, so I took the opportunity to have one of my last climbing sessions, and hopefully provide some entertaining distraction for people feeling a bit overwhelmed and anxious currently.

Back to the climbing…

The CWIF qualifiers are probably more stressful that they are fun if I’m being honest – with such a mix of problems, and everything being set to be droppable, you can’t really loose focus. I had a mixed round, actually struggling with some of the easier boulders, but redeeming myself on the harder ones. All in all it was enough to make semis in a comfortable 8th place.

Walking out onto the mats for semis felt a little bizarre – the Climbing Works had made the decision not to allow spectators in to watch due to the outbreak, so we had judges, setters and a crowd soundtrack to climb for! I felt great in semis, flashing the first three boulders pretty comfortably as they were physical and suited to my style. The good run ended as soon as I hit the slab, and I was reminded that although I was feeling good, there certainly was still work to be done. I must admit I struggled to focus on the slab – knowing I’d probably done enough to be in finals, the tension lifted, I relaxed and maybe relaxed a bit too hard not being able to get my head down and figure out the method for the slab! But luckily I was right, and I was through to finals in third.

The first boulder was fairly steep and had an element of new school coordination with a toe hook catch start. During observation I thought this boulder looked the hardest, so was surprised to find myself at the top of it first go! The second was the slab – so far my nemesis style this competition. I guess I was lucky it was a hard slab, as only Holly Toothill managed to get the zone only a few seconds before her buzzer went. Despite not scoring on this boulder, it was generally a positive experience for me as I felt like I progressed during my time on it, unlocked a sequence that I think could’ve worked for me, and micromanaged slight adjustments between attempts. I think that I’d be able to do the boulder if I had more than the time allowed… but that’s not how it works unfortunately!

The third boulder was the one I was most nervous for – not because of the moves, more because the texture of these volumes felt so grippy it felt like if my skin caught them I wouldn’t be able to fall off of them! I really knew I had to flash this boulder if I wanted to have skin good enough to put a good climb in on the final bloc. I tried hard and again found myself with another flash. It was pretty tight now between myself, Holly and Brooke all of us on two flashes.

The final boulder was surprisingly the hardest, made harder with several bleeding fingertips! After falling on the final move first try, I was feeling pretty tired but motivated. With one last (probably for several months!) big effort I found the hidden foot and topped the boulder. To my surprise, I was the only woman able to top that boulder, and that gave me the win!

With all the craziness happening right now, I was grateful to have the opportunity to compete at least once this year. It was a big mental push for me to see all the hard work I’d put in over the winter had been beneficial and is now helping me to stay positive and motivated at home during this time of social distancing. Now my skin has recovered, I plan on getting back to a new ‚normal’ – home hang boarding sessions, yoga, core and maybe some isolated runs. All in the hopes that I can get back on the mats in the not too distant future!”

Find out more about Molly within our team section on our website https://www.scarpa.co.uk/scarpa-team/molly-thompson-smith/

Molly was wearing Scarpa Drago’s throughout the event to find out more about that shoe please visit https://www.scarpa.co.uk/climb/drago/