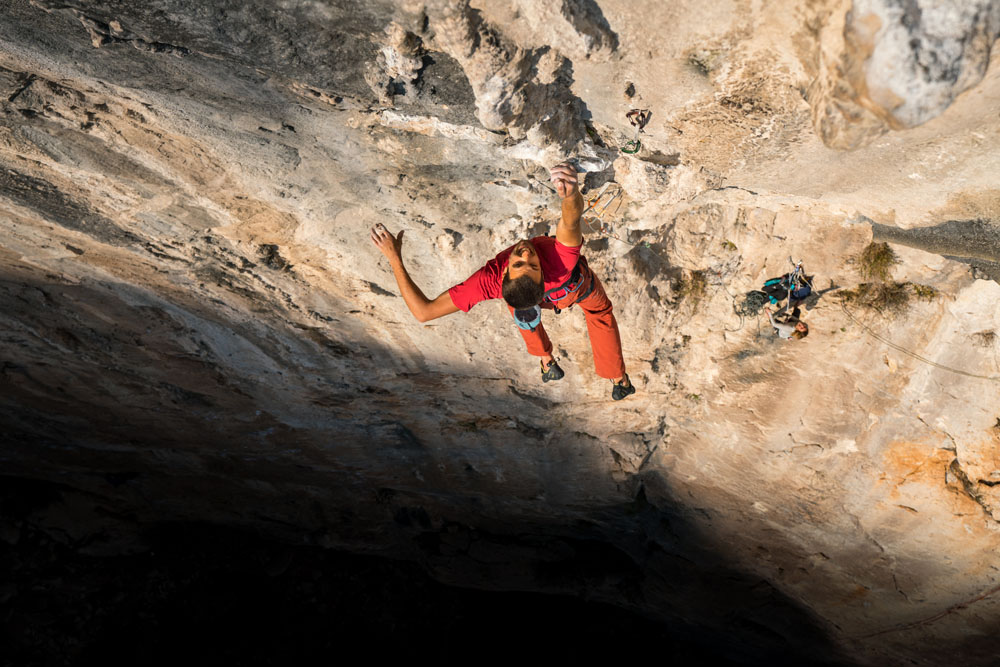 We caught up with Scarpa athlete Jacob cook after his very successful climbing trip to Mexico at the beginning of the year. It was a busy trip and he made sure he got lots of climbing in. Read his account of the adventure that made him remember why he loves the sport.

“I met Tony McLane at 3am in Houston airport and we sleepily stumbled our way onto the final flight to Monterrey. We’d both bought the cheapest tickets we could find, which resulted in a long night of various airports. My only goal coming to Mexico was to climb a lot, especially on big routes, in preparation and training for some trips later in the year. After a month of work in December during which I was injured and hardly climbed, I left Squamish with no expectations.

Tony and I began in Potrero Chico, working our way through a number of the classic lines: 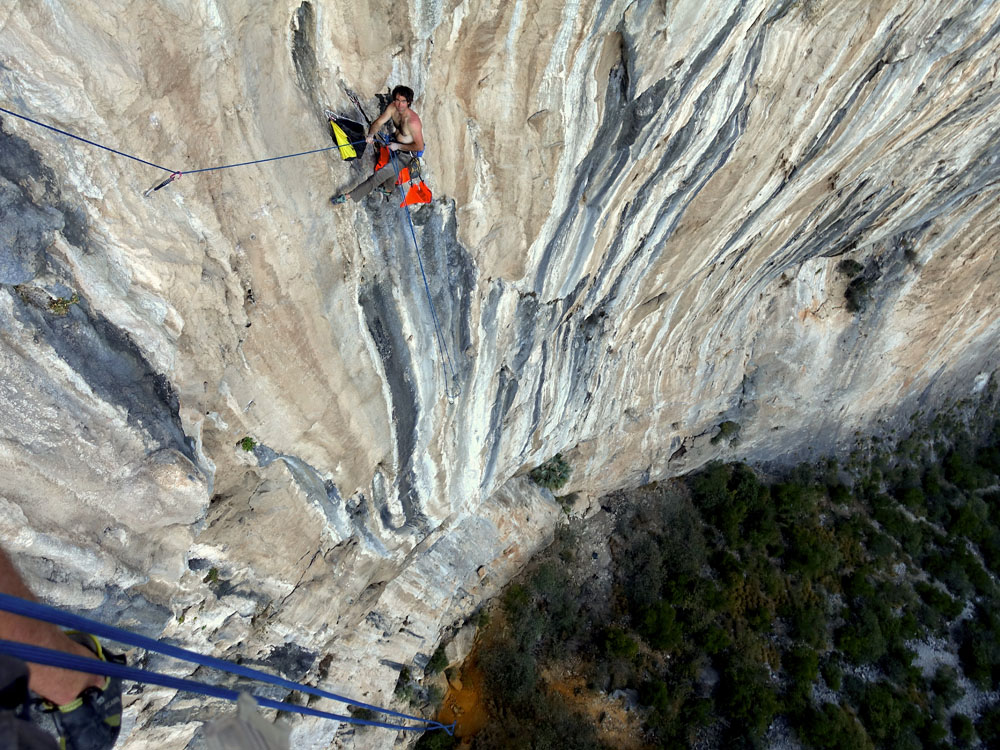 In general the rock is of mixed quality, sometimes chossy and cactus infested, but with some amazing all-time quality pitches as well. We used a variety of tactics, sometimes hauling a bag with a 5mm tag line, sometimes simul-climbing large sections. It felt good to be moving a lot and especially moving efficiently with Tony, who I have climbed with a lot over the past couple of years.

Once we’d hit our stride and gained some fitness, we turned our sights to our first major objective… On a clear day if you look North from Potrero you can see this striking prow of rock high up on a hillside, bearing something of a resemblance to Ceuse; La Popa.

Five years ago, I had listened to this Enormocast episode with Jeff Jackson https://enormocast.com/tag/jeff-jackson/, he told the tale of this crazy wall, continuously overhanging with tufa’s for 200m. Way out there in the desert.

“You take this dirt road through the village of Los Remotos, then keep going to the end of the road. Strange things happen out there in the Desert though man, the locals talk of the Naguales, shape-shifting horse people, horse by day, human by night, some use their powers for good, others for ill…”

After hearing this tale 5 years ago I was intrigued, and emailed Jeff Jackson who replied with some beta and photos of his route “El Gavilan” which means “The Hawk,” but the trip never ended up happening, until now…

Tony and I arranged for a local climber named Jesus to give us a ride out there in his 4×4 truck, we took food and water for 3 days, and arranged a pick-up time for him to return and get us. It felt committing watching the dust rise and the silence kick in as the roar of his truck faded into the distance. We made two trips of about 45 minutes each into some boulders and set up a base camp. That night, long after we’d gone to sleep I heard Tony outside my tent “Dude, wake up, you’ve gotta come see this!” Sleepily I wondered if he’d eaten some cactus and come across the Naguales, but he said “Dude, the moons gone!” Everything was bathed in this eerie red light and we quickly realised that this must be a lunar eclipse, despite having no idea one was forecast. I know now that this was a major event, “the Super Blood Wolf Moon” in fact. We sat and watched in silent awe, the place was already living up to its trippy reputation! 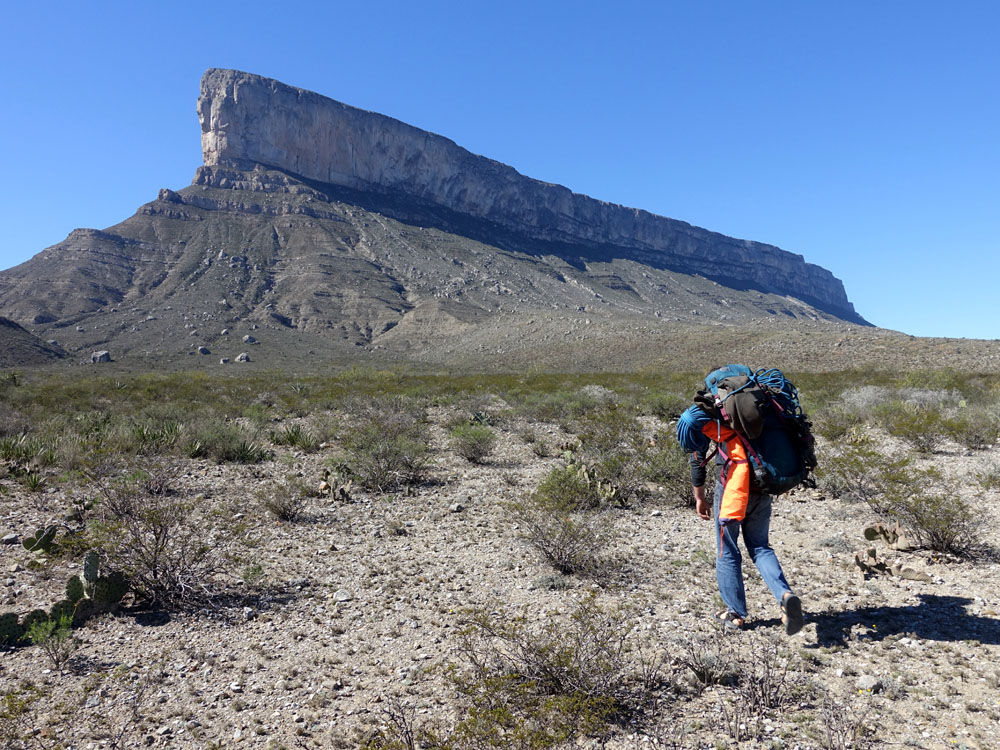 Our view of the Ceuse-esque wall

Our beta from Alex Honnold, who as far is we know is the only person to have repeated the route (in 2011), was “go to where the wall looks awesome, and look for the bolts.” He neglected to mention the 3 hours of 45 degree hillside cactus-whacking to get there. Thanks Alex.

The climbing was outrageously steep. On the second pitch I pulled off a big flake and went for a scary ride, way out into space. Over the following two days we climbed 8 of the most wildly overhung and tufa-drenched pitches of our lives. It felt cool to be way out there in the middle of the desert, with nobody for miles around, swinging between tufa’s on a route that had had only one repeat since the 90s. However, one downside to the fun was that the bolts were very rusty indeed. We ended up climbing past each belay and including the first bolt on the next pitch in the belay. We didn’t quite send the whole route, but I did manage to Onsight some pitches up high up to 13a/7c+, which was highly enjoyable. Overall, we left feeling satisfied with a great adventure. 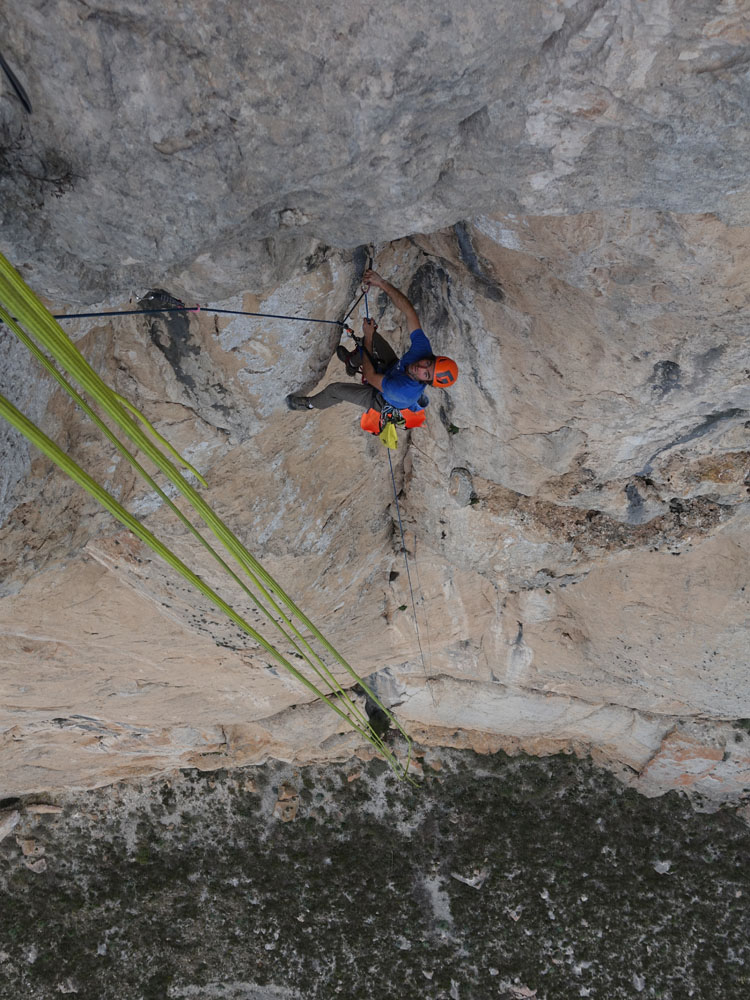 As we hiked down to meet Jesus, we couldn’t help eyeing up this huge obvious crack and corner system to the left of El Gavilan… “I wonder if there are good cracks for gear up there?”

A week later we were back, this time with Savannah Cummins, who was along for the adventure and to snap some photos. The plan was to attempt the virgin corner system we had spotted last time. With no idea what to expect, we brought the full arsenal of tools: A double rack of nuts and cams up to number 6, skyhooks, beaks, Tony’s drill and two batteries, 14 bolts and a wire brush. Climbing around BC, Canada, Tony and I have perfected a kind of hybrid ground-up style, which was particularly useful on our new route on the East face of Mount Slesse in summer 2017. We lead off into the unknown until things get unreasonably runout, then tag the drill, usually using our mouth and one hand whilst hanging on with the other hand, then slowly and carefully drill a bolt. We’ve discovered that once you’ve drilled half the hole you can use the drill bit as a handhold to shake out before you drill the rest of it. We quested up over two days of wide, loose, bushy, adventurous and generally awesome rock climbing. The crux came on day two when Tony did battle with an overhanging off width, taking great pleasure, it seemed, in showering Savannah and I at our hanging belay with a cascade of mud and cactus whilst he excavated gear placements. 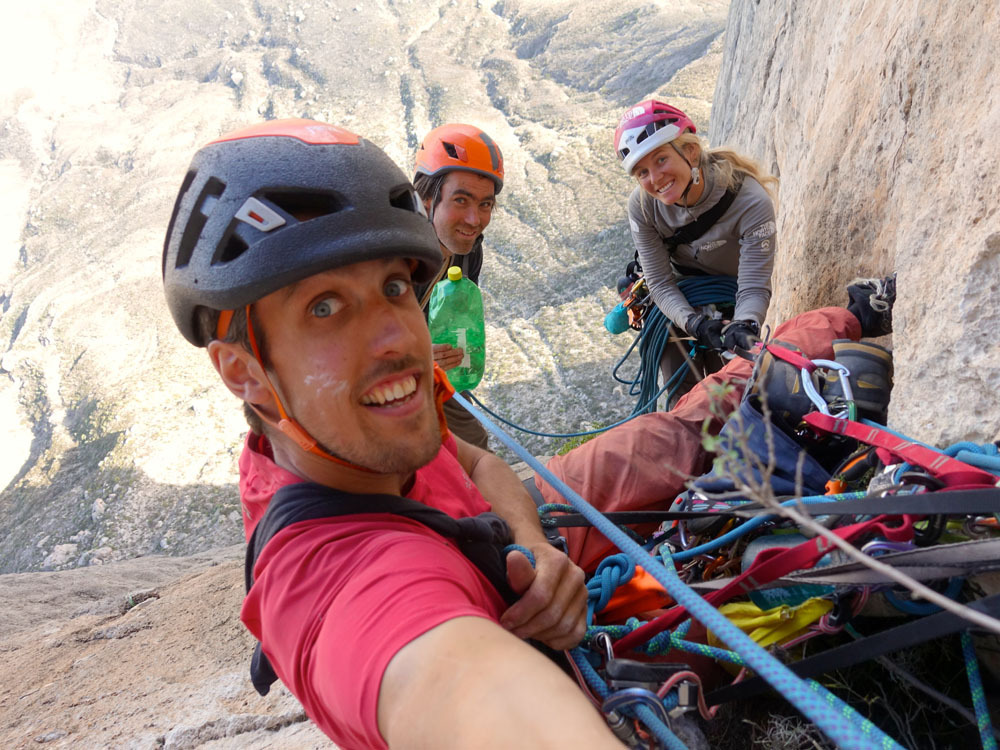 Overall it was a fantastic adventure, featuring a large number of unknowns, with great friends. We succeeded in making the first ascent of Super Blood Wolf (5.11 A1). 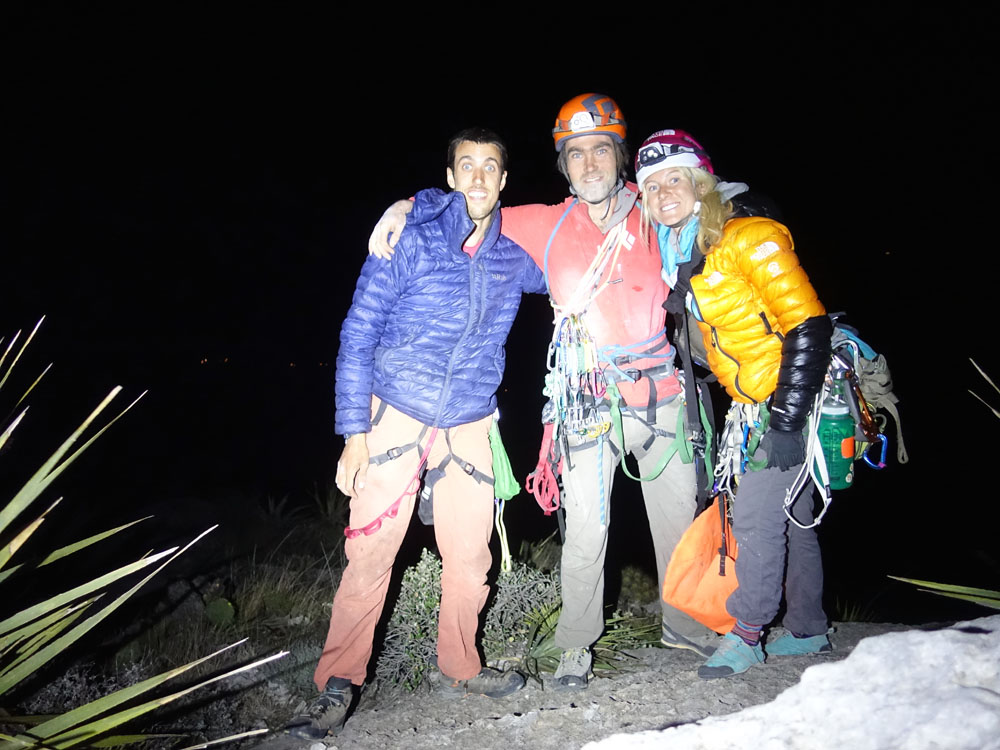 A week later our friends Drew Marshall and JP Thomas went and repeated our route, making the first free ascent (at 5.11) in the process, hats off folks!

Next up I teamed up with Drew Marshall, who I had never climbed with before, but we shared a passion for Magic the Gathering cards, so I knew it would go well. We decided that neither of us had done enough climbing yet and needed to up the ante. The goal was to climb Sendero Luminoso (12d/7c 15 pitches) and Timewave Zero (12a/7a+ 23 pitches) in one day. Sendero Luminoso is very sustained and has lots and lots of tenuous slab climbing, you really need to have a good feeling for the limits of friction on the smooth grey Potrero limestone.

After Sendero our feet hurt and we made a stop at Taco Loco, where we ate ten tacos each and drank a beer before we could get psyched to start Timewave. We simul-climbed the route, which is mostly moderate climbing, in 3 hours by headlamp. We were definitely moving faster because of the scary looking rain clouds above us and did get lightly showered on a couple of times on the route. This was a great cardio workout and one of the most fun continuous chunks of climbing on the entire trip. I managed to make it the whole day with no falls and the two routes took us 15 hours combined car to car. We called our 38 pitch link-up “the Sendwave” and I think it’s destined to become a classic, or, possibly not…

After this I decided that I’d had enough of multi-pitching, especially hanging belays, and was going to spend the rest of the trip lounging around in the sun. However, Drew had other ideas and convinced me to come out of retirement for one last mission…

To the left of Sendero Luminoso there was rumour of an enormous new route, bolted and cleaned over the last five years by Eric Werfel and friends, which had yet to see a free ascent. Drew and I now had our simul system honed and over 7.5 hours we made the first free ascent of La Sombra Luminosa (12c, 27 pitches), both on sighting the route. The climbing was adventurous and involved significant choss management, interspersed with some excellent pitches. The crux is this perfect laser cut stem-corner; tenuous and technical, with just enough dimples in the right wall to stop it from being truly desperate. It’s not every day you get to make the first free ascent of a 27 pitch desert alpine sport climb, we were very grateful to Eric Werfel for the monumental amount of work in putting the route up and then opening it up for people to try. 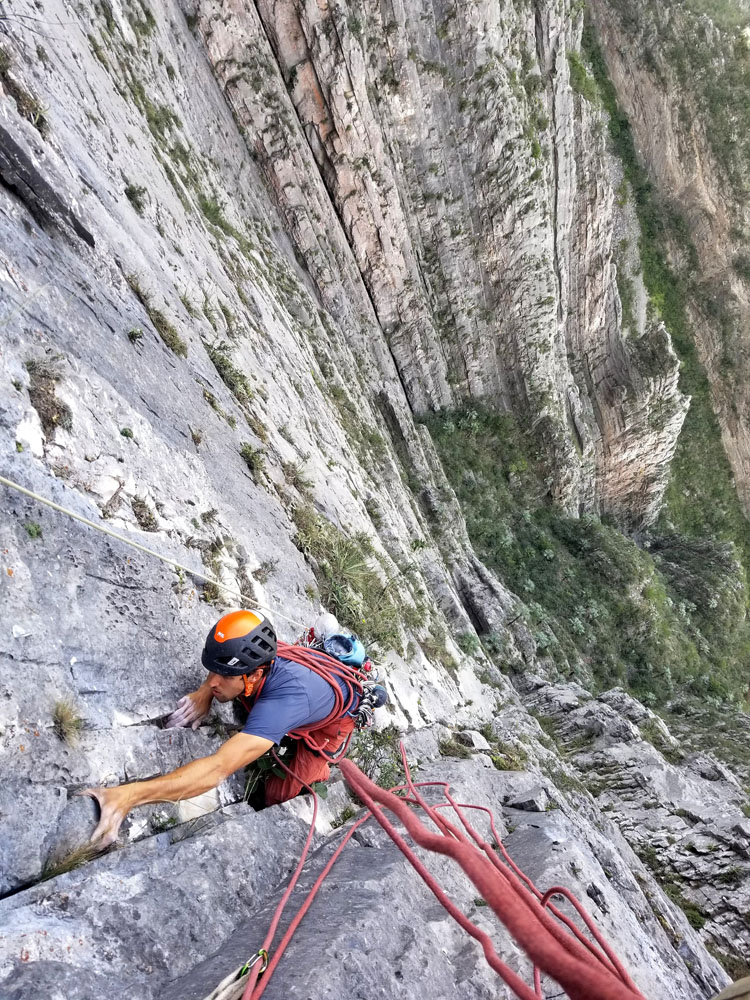 Finally, I did get to spend the last 10 days of my trip lounging around in the sun as I’d hoped. I managed to squeeze in a couple of single pitch redpoints, including Enrage (13d or 8b) and Dante’s Inferno Extension (13d/14a or 8b/+) in El Salto. The second of which Bronwyn shot some great video of on the send go, check it out – https://www.youtube.com/watch?v=_oycoyIXC-8&feature=youtu.be

This trip I feel like I was enjoying climbing more than ever before and I learned some more about what it is that I really love in the sport. Ambitious goals and progression are important, but for me the most memorable things are always the human interactions and the uncertainty involved in big adventures. I can’t wait for more this spring!”

Keep an eye on our social pages to see what adventures Jacob has planned for the rest of the year.