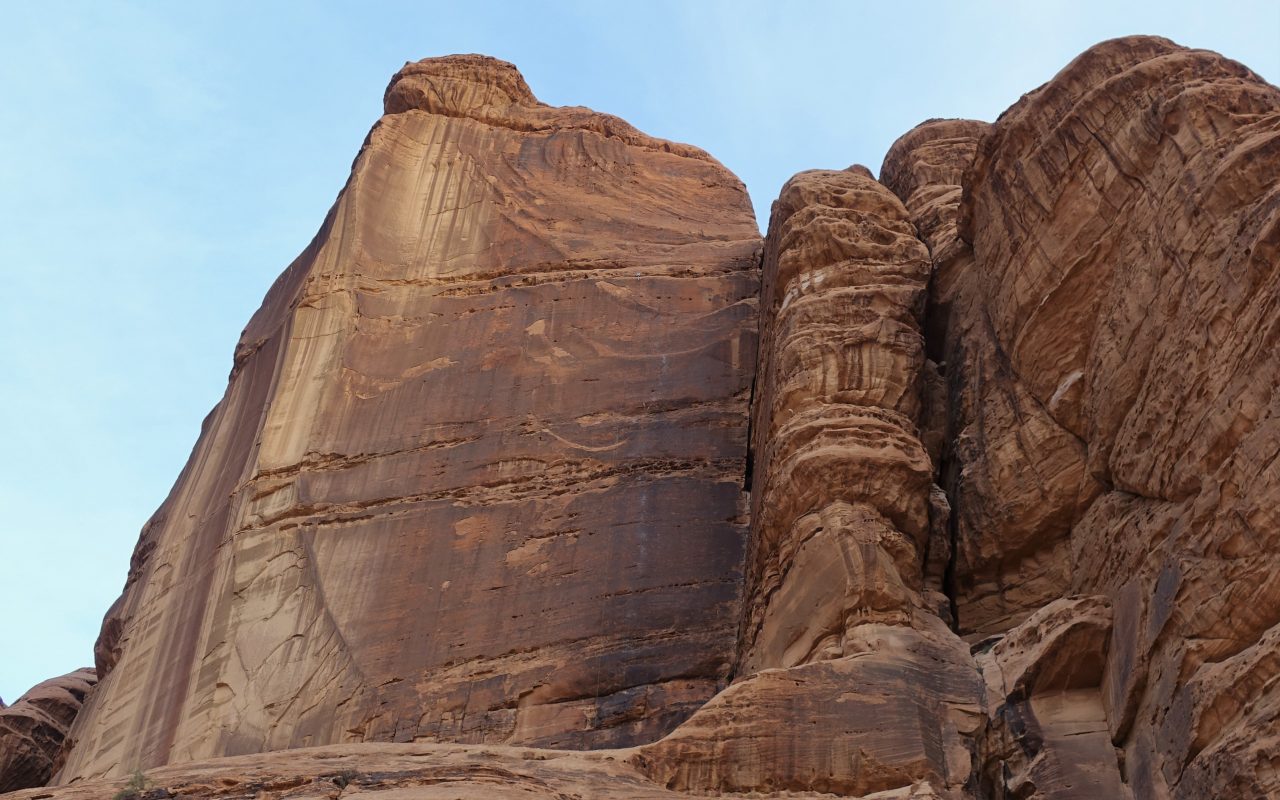 Calum Muskett and Dan McManus have recently returned from Wadi Rum, Jordan, where they successfully climbed a brand new line on an impressive face. Dan has sent us this write up to find out more about the climb and the area.

After his work trip to Wadi Rum in June teaching local guides, Calum Muskett showed me some photos which blew my mind. An unclimbed 200m metre sandstone wall featuring one of the best lines I’ve ever seen. There certainly was a good chance it would not be climbable or anything less than desperate, but I was so impressed I put these concerns aside and said I was keen to check it out at the first possible opportunity. We had to get summer out the way first, as being a desert in the Middle East, Wadi Rum is intolerably hot during the summer months. We were lucky to find a slot this November that worked for us both, between Calum’s busy routine as motivational speaker and mountain guide trainee.

Compared to all my previous climbing trips, this was to feature a significance difference: there was going to be little or no natural protection on the route and no one had placed any bolts for us. This meant sourcing a drill, lots of glue and a big bag of bolts suitable for the soft sandstone. It also meant breaking my so far unblemished record of not having ever placed a bolt! However, seeing as how I have always been more than happy to clip bolts wherever I may find them, this was probably long overdue. We therefore had plenty to do in the months before the trip obtained the necessary kit and, in my case, watching YouTube videos of how to place glue-ins. 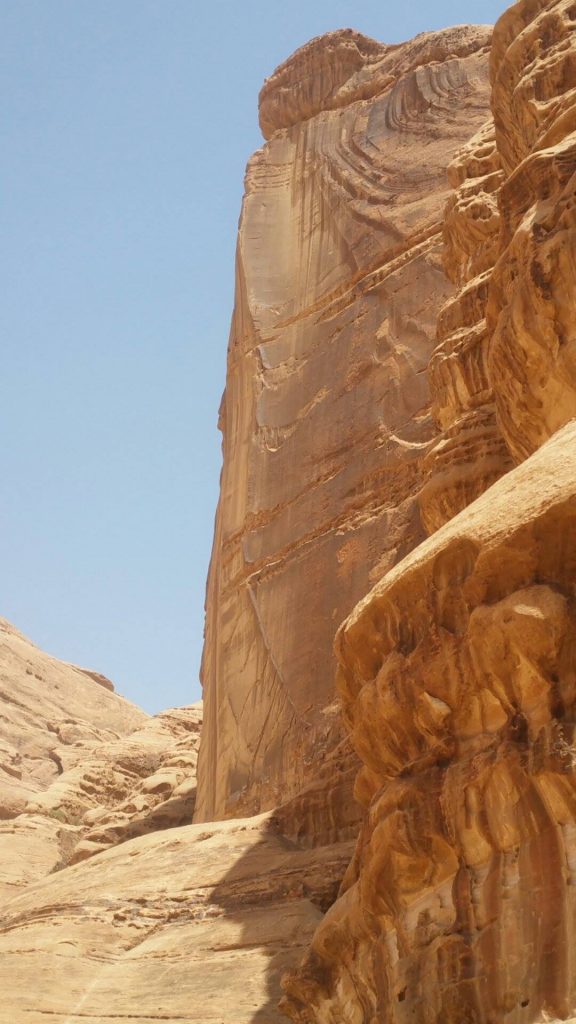 I was very excited to see what we’d find once we could get close to the wall, whether or not it would have features that are not visible from below. Sometimes walls which look blank from below have an abundance of upward facing features which can only be seen from above. There are several obvious belay ledges and we estimated that the wall would be climbed in roughly 4-5 pitches. The hope was that the finish would follow the soaring arête line, which the photos showed to have a crack running most of its length. Of most concern was the section of arête reaching this crack, and the first pitch which we hoped would follow the smooth ramp feature.

We landed in Amman on the 12th of November, picked up a beaten up hire car and set off to master the Jordanian roads. Once in Wadi Rum we were fixed up with a sort of ‘agent’, called Tawfiq, who was keen to sort out everything we could possibly need. The Wadi Rum area is a stunning landscape, unlike any that I’ve been to before. Very different from the other desert area I’ve visited around Bishop in California. We stayed at a glamping site in the desert, run by a Syrian family who fed us chicken, rice and hummus.

We didn’t waste any time in getting a 4×4 out to Barra Canyon to scope out the project. Standing underneath it for the first time I was both impressed and dismayed; it looked as good if not better than in the photo, but it also looked just as blank. Getting to the top involved hauling up the E1 corner on the right. Our intention was to rappel the route with the minimum effort to begin to get an idea of whether it was possible. We had very little time to check the route on the first day before it got dark but our initial conclusion was ‘maybe’. Our ropes were now fixed for a much closer look the next day. 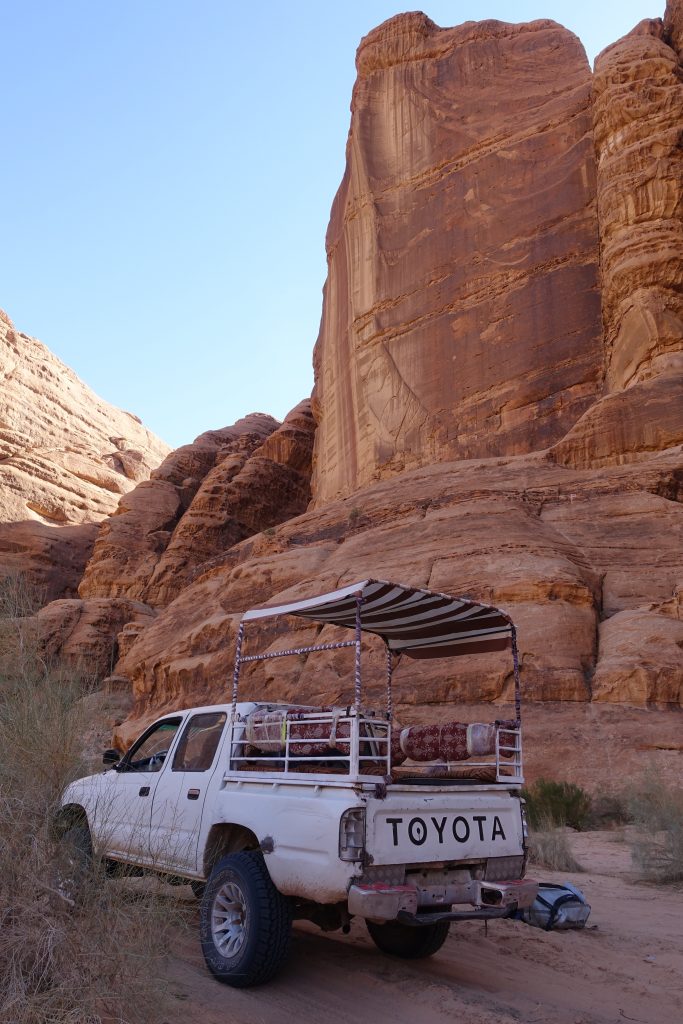 We focused our attention on the first section, the ramp, since this looked likely to be very hard. And it is. The lower section looked doable, the middle section was difficult to reach at the time but did have a few holds, but the top… I knew pretty quickly that this was going to be beyond me, and it was a sad realisation. It does in fact have holds, so I think it is climbable, but I expect it would be somewhere in the 9’s. Another problem, which we hadn’t expected, was the poorer quality of the rock on the left hand side of the arête. This only compounded the difficulties and made us less keen to invest our energy into it, so we resolved to retrieve our gear the next day.

While all this had been going on we had occasionally been eyeing up the large expanse of wall on the right. This is where the best rock was to be found and Calum in particular thought he’d spied a line of holds up the blank lower section. As we were in the area we moved our anchors 50m right and went down for a look. After looking at the upper section Calum jugged back up raving about a line of holds weaving up the wall and an amazing crux using two pebbles. This persuaded me to have a look at the lower pitches and we discovered an extraordinary line up the otherwise black wall. Although it didn’t have the same aesthetic beauty of the first line, it looked like it would make up for it with immaculate face climbing. 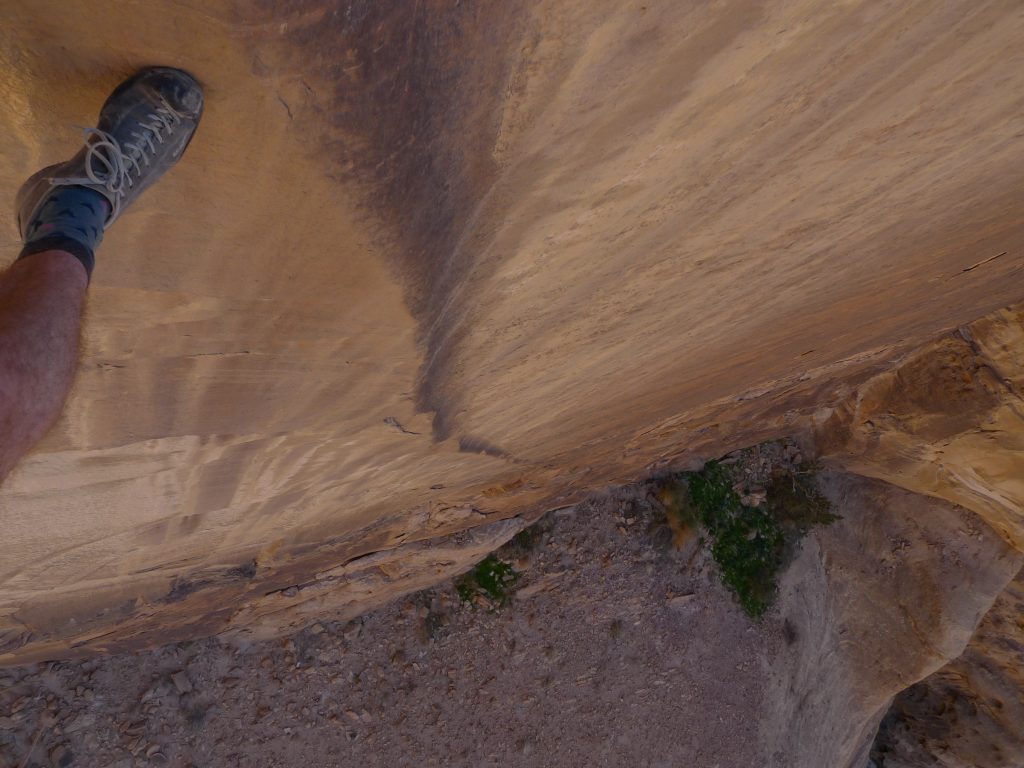 We got to work over the next couple of days, I focused on the first two pitches while Calum focussed on the second two, unlocking the climbing and working out where the bolts would need to be. The second pitch is the thinnest, but also a slab, while the third pitch is steeper. The climbing is superb, some of, if not the best, face climbing I’ve ever done. Nowhere is it easy, yet nor is it desperate. The crux of the second pitch might be V5 or V6, but there is 20 metres of slab climbing to reach it! It felt like a lot of work equipping the route and gave me a newfound respect for those who have gone to the effort of equipping much longer routes in the mountains. 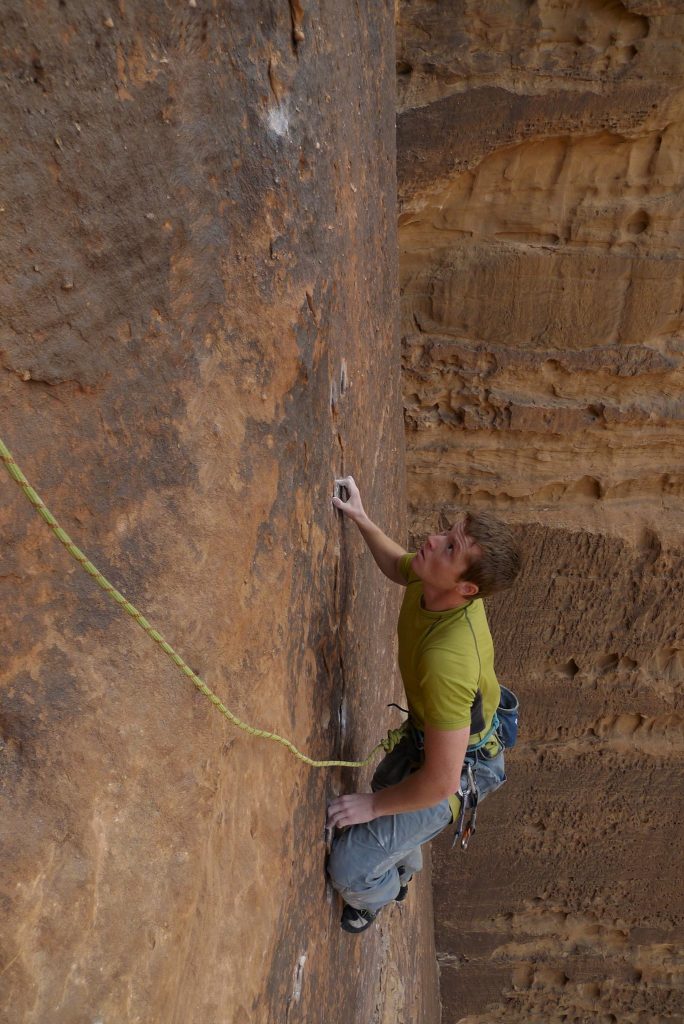 Halfway through the trip we had a couple of rest days visiting Petra and the Dead Sea. Afterwards, with the route now fully equipped, we were ready to finally do some climbing. I led the short first pitch, a good 7a+ in its own right. Calum then set off on the second, crux pitch and getting through the hardest moves fell at the most runout point on the pitch. We switched over and I cleanly led it by the skin of my teeth despite messing up a few sequences. After seconding, Calum led the next pitch via a lot of power screaming. I hadn’t had a good look at this pitch, assuming it wouldn’t be too bad. This was almost a mistake as it was really tough and Calum had neglected to put many bolts in this pitch! I sketched my way through it with Calum shouting down the beta. Calum reliably informed me that I would run up the final pitch, good to hear as it’d be getting dark soon. As soon as I set off I had to start doing moves that felt bold and hard. After a few bolts I handed the reins back to Calum who had already worked the pitch. This turned out to be another touch pitch, of around 7b+, with much sparser bolting and top quality climbing. 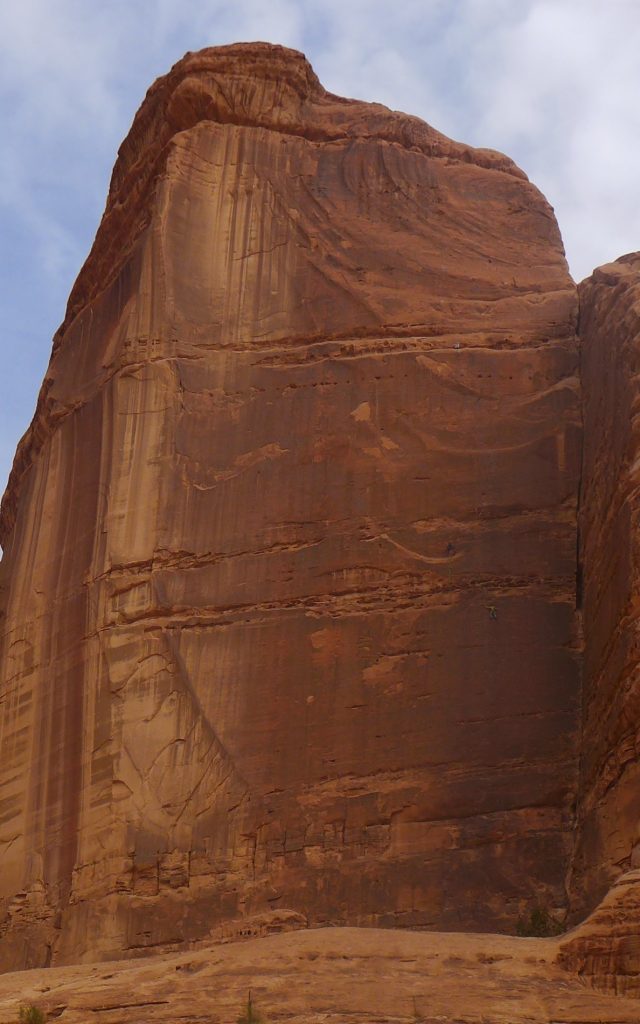 This was a very different trip for us and this route is also unusual for Wadi Rum, being home to mainly traditional adventure routes. Hopefully it will see some attention for those keen for some tricky face climbing on the desert sandstone. We missed out on our main objective unfortunately, but we got very lucky finding the first way up this large unclimbed face. There are new routes in abundance, but these can be hard to find for those like us who don’t know the area well. The route is called ‘Yalla Shabab’ meaning ‘get a move on youth!’ and our suggested pitch grades are 7a+, 8a, 7c+ and 7b+, three stars of course. 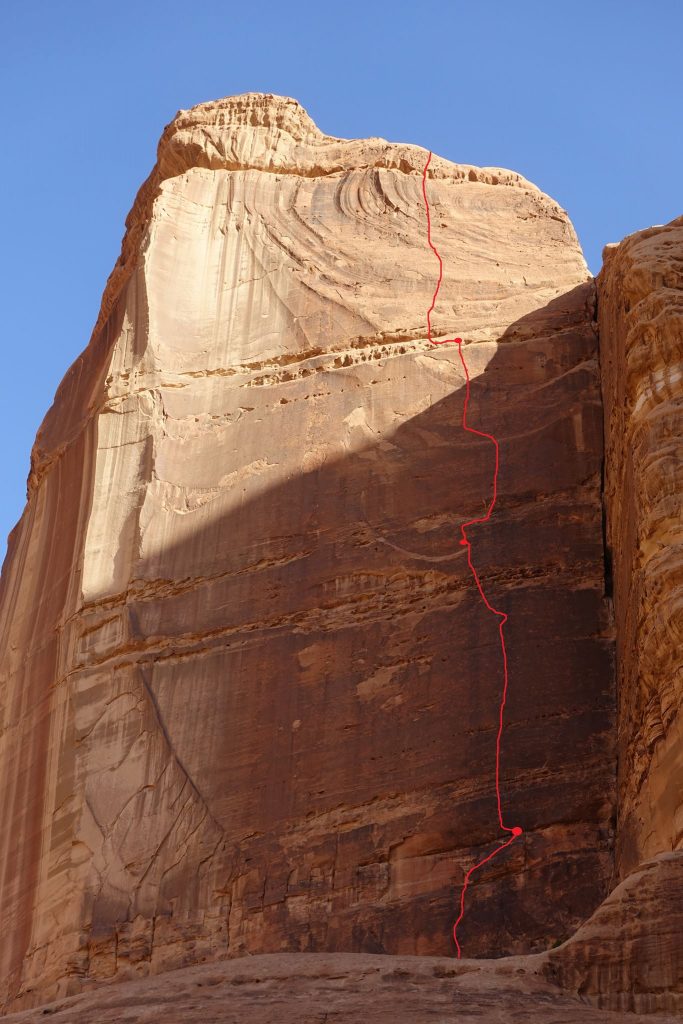 Thanks to Dan for the write up, keep an eye on what he’s up to by visiting his Scarpa Team Page. 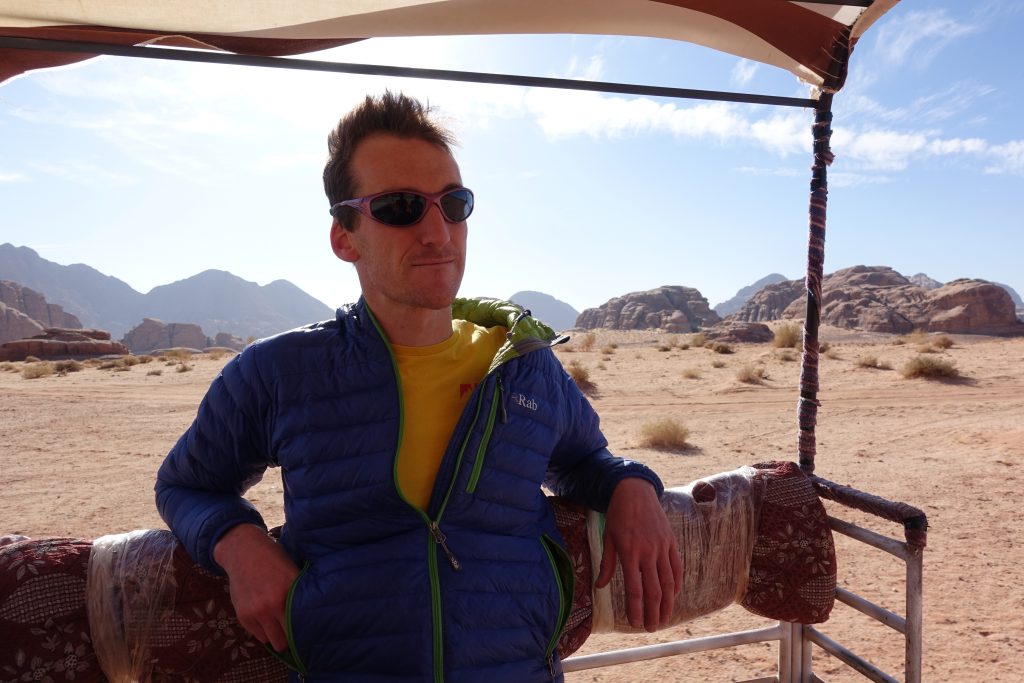