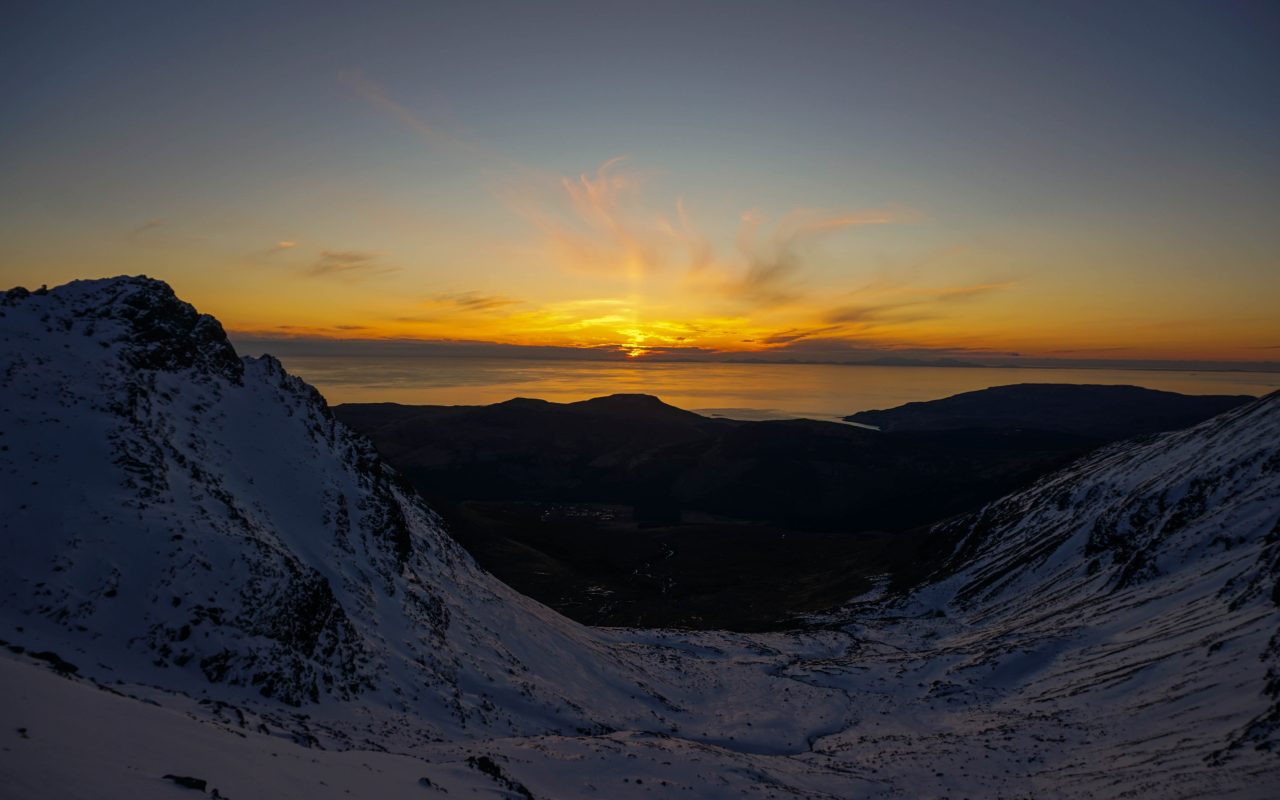 Some Scottish winter climbing routes get big reputations: they’re hard, bold or unrepeated. Sometimes they’re the routes everyone falls off, the one where everyone gets lost, the looked at but not climbed, the tried but unfinished and, of course, the one with a formidable name.

I was sitting in the CIC hut on a wet night in late November 2013. Only Robin and I were in the hut that weekend Robin’s enthusiastic phone call had convinced me, despite the bad forecast. I sat in the corner reading a climbing magazine, gear strewn all over the table, wet boots drying by the fire. The heavy rain had made for a wet Friday night walk in. Robin had turned on all the gas fires and gas hobs to try and warm up the hut. He marched around doing his usual routine of sorting out any problems with the hut. I had worked 60 hours the past week and was in no mood to begin doing some more. Robin however, moved his massive frame round the hut replacing lightbulbs and carrying out his other responsibilities as hut custodian.

I carried on reading the article, an interview with Simon Richardson, engrossed in the stories of Simon’s explorations all over Scotland. Two minutes later I was laughing as I saw Robin’s name pop up.  “Robin Clothier taught me that routes don’t deserve reputations.” I read it out loud to Robin as he fiddled with the smoke detector. “Well they don’t. Every route is different to every different person; you have to try it to find out,” he said with a dead straight face in his best debating voice. After a short pause he continued to explain in much more detail, (making sure to use as many long words as possible – a tactic he puts to good use to make his point no matter the subject, climbing, politics or speed limits). I stopped listening. He had made a good point in the first two sentences, but “less is more” is a theory Robin has never managed to grasp.

I couldn’t tell you what we ate that night or anything else we talked about, or even the routes we did over the weekend. However, I remember Simon’s quote from the magazine and what Robin said.

Routes don’t deserve reputations only a description and a grade. Robin was right.  However, it’s taken me a long time to really believe it.  I still forget and get excited, scared and nervous when the possibility of climbing a route with a big reputation presents itself.

“It’s definitely head torches,” Adam said through the dark. “Yeah I know, oh well we can climb something else, another route will be in good condition,” I replied. The voice in my head was muttering but it’s not going to be Icicle Factory knowing that if someone else had bothered to leave the car park at 4:30 am there was a reason. We walked along beside the fairy pools and started up the steeper hill side. The full moon began to lose its brightness as the sun gradually showed on the very tops of the snaking Garbo spikes that make up the Cuillin Ridge.

We were heading to Scurr a’ Mhadaidh’s legendary amphitheatre. The original plan had been to climb a Mick Fowler and Victor Saunders route, Icicle Factory – a mythical unrepeated route and as with all their routes it had a bit of a reputation. Many teams over the years had committed to the long drive to Skye and made the long walk up to the route only to be shut down by weather and conditions, combined with intimidation. A few days before someone had tried it, had fallen from the top crux pitch and due to injury were forced to retreat.

After an hour and a half of walking most of which we spent commenting about how good the weather was, we arrived at the bottom of the amphitheatre. Peering up into the back of it we saw the team of 3 already 2 pitches up Icicle Factory. We all agreed we didn’t like climbing ice below people as it generally involves getting hit by ice from the team above for the whole day. Besides, Adam, Dougie and I were all wondering what the big ice fall to the left was. It wasn’t in the guide. “Well, will we just do that!?” I asked but in my excitement it came out as more of a statement.

I looked up at the ice above. 30m of vertical ice led to a ledge with a steep pull up a small ice pillar. Above it looked like it kicked back but with some steps of steep ice. I knew we could climb it. My brain thinking rationally – no reputation, no history, no famous first ascensionists, just the facts. Fat fun sticky steep ice. I geared up, tied in and started swinging upwards. Heading off with no idea of what the climbing will be like is, for me, one the best things about climbing a first ascent. Sometimes I worry about when the hard climbing will kick in, others I just relax only thinking about the next move and live in the moment, something that is rare in modern life. My experience on this route was one of those times where you just relax and enjoy it. We finished the route in good time so decided to abseil the route and go and try the Icicle Factory. The other team had finished it and were abseiling with the idea of repeating our route.

Standing at the bottom I felt nervous – my brain abandoning its rational state, the stories running through my head. It had just been climbed. They said it was in great condition. We had just climbed ice 20 metres to the left and it had perfect first time placements all the way. But this is a Mick Fouler old school grade V, meaning it could be anything from grade VI-VIII. It looked in better condition and even fatter than the route we had just climbed but the reputation had pushed into my brain and all the worst scenarios started playing out in my head. Adam and Dougie seemed relaxed. They didn’t know much about the route and as a result their brains were working better than mine. It’s not that I wasn’t going to climb it because of these feelings but it’s amazing how it plays with your mind.  Once climbing my mind relaxed as the climbing and conditions really were amazing making the climbing completely straight forward. Dougie did the first pitch. I led a long second pitch up the steep chimneys with Adam steadily climbing the crux pillars I had fantasised about so much.  We didn’t abseil this time. The weather had been perfect all day and we thought it would be good to stand in the sun for a bit and watch the sunset. Words and even pictures can’t describe how content I felt sitting there, all three of us silenced by the beauty of it.

Climbing or even trying to climb a route with a big reputation and history has always left me feeling content. A lot of the time success or failure comes down to conditions and trusting your own judgment of them. Perhaps I feel routes do deserve reputations as it adds to the experience and is another reason why Scottish winter climbing is unique. However, I must remember to conveniently forget it before I go and try the next one! 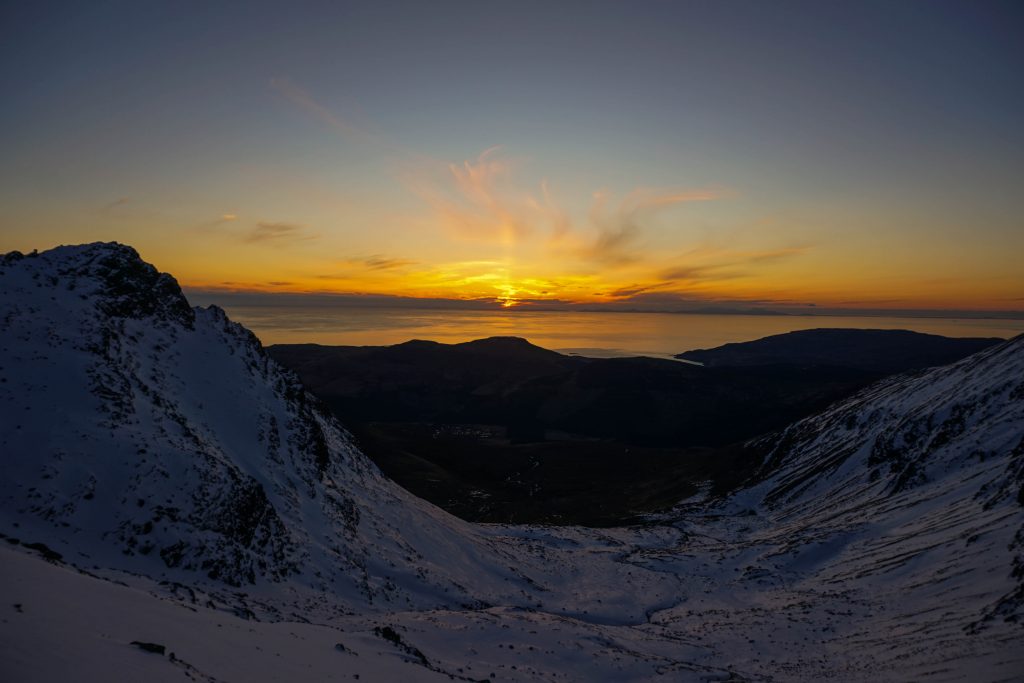