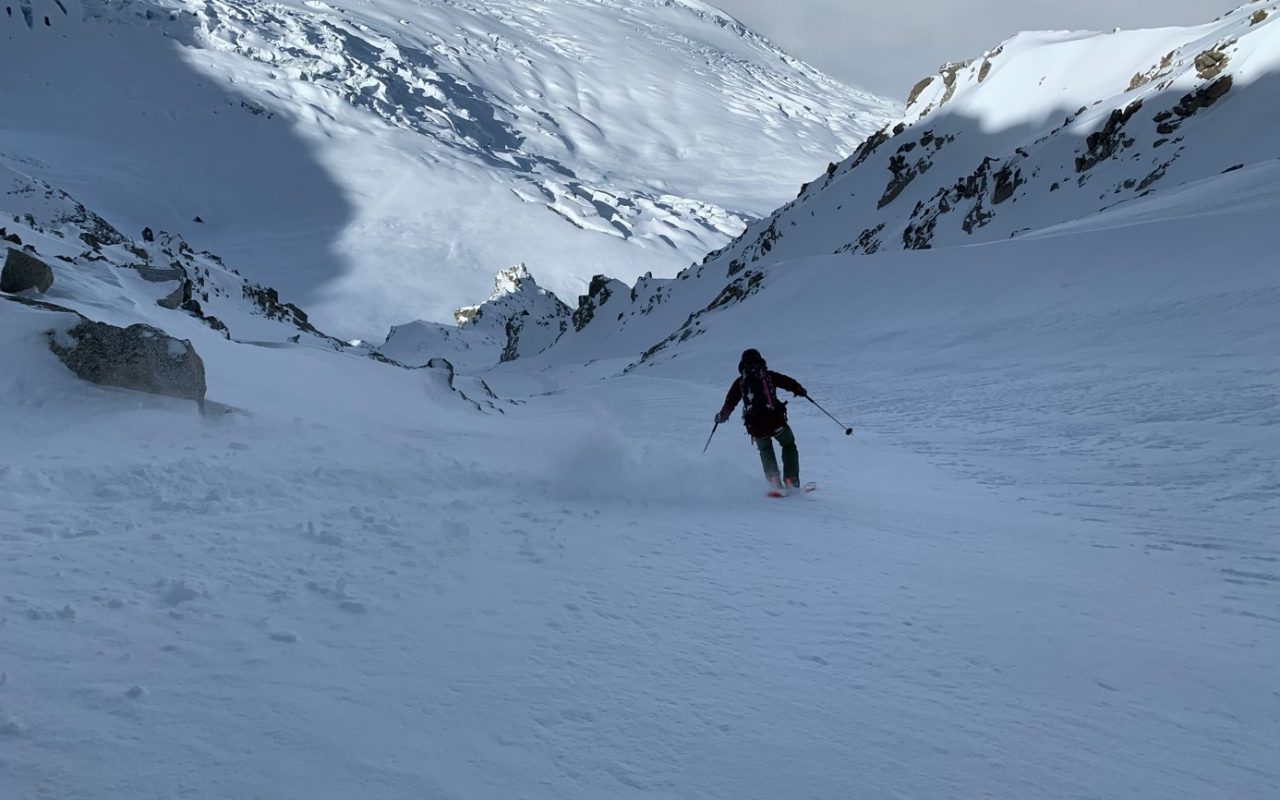 We caught up with SCARPA athlete Tom Grant as he shares with us his SCARPA season summary where he details his highlights of his season (so far) and how he was nearly at the end of the most exhausting and exhilarating phase of his season before Covid-19 interrupted.

This last Winter/Spring season will always be remembered for the inconvenient interruption brought on by the worst global pandemic of the last 100 years. The sheer intensity with which people in Chamonix live their lives meant that the disconcertingly fast transition from being in the full flow of skiing big lines every day during what were the best conditions of the season to being in full confinement, resulted in a particularly strong contrast of existence.

I certainly struggled to initially wrap my head around it. When the confinement was announced, I was nearly the end of the most exhilarating and exhausting phase of my season. Delivering mind blowing ski conditions to both old and new clients alike, guiding strong skiers one to one on big lines many days, taking advantage of awesome conditions and skiing hard for myself every day I wasn’t guiding. This is what I live for, it’s what gets me up in the morning when I’m still tired from the day before. Finding a state of flow, being closely in tune with the mountains, sharing my knowledge and skills with my clients and developing a strong bond with them along the way. Keeping people safe in serious terrain, skiing fast on the Massif’s best freeride lines. This forms part of my livelihood I depend on, but the experience itself is intrinsically rewarding. The new normal post March 14th therefore came as a shock to my system.

It’s March 14th, and as I put my skis on at 3,700 meters, near the top of the Courtes, I briefly contemplated my first few turns, gauging how much sluff I’d generate and waiting for the last person climbing up to get out of the way. To savor the anticipation of opening an 800 meter, steep line is always a priceless moment. The boot pack had been deep, and I’d broken trail much of the way up. I’d had one rest day in the last two and a half weeks, but it didn’t matter. By this point in the season, my body and mind were strong and the excellent snow we were enjoying kept giving me a fresh kick of motivation each day.

I made a few turns on perfect 50 degree powder and waited for Leo to join me. Over the last couple of seasons, I have been guiding Leo on these sorts of runs, building his confidence and skills on big mountain terrain. Waiting for him to join me, I knew this descent was going to be one of the ski highlights of his life. This thought made me very happy. Conditions were both safe and forgiving. I still had no real inkling this run would be the last in a while for the both of us.

As we near the end of the pandemic’s first phase, and a period of what will probably be the most restrictive lock-down measures we will face, I’ve enjoyed taking a look back at the highlights of my season (so far).

It was a season of contrasts; from some of the driest January ski conditions in a decade to one of the biggest storm cycles I’ve experienced at the start of March on the Italian side. Early season in December, lap after lap of incredible lift served powder got my legs ready. Overall, statistically it was the warmest Winter on record. Yet every moment in time presents good opportunities for doing something. In Chamonix, if you stay motivated and flexible, ready to seize the moment, there is almost always something really cool to do.

While fairly mediocre ski conditions prevailed early in the new year, some ephemeral mid-elevation ice routes formed the better than they have in at least 8 years. Beyond Good and Evil is a route that caught my imagination on my very first alpine climbing trip to Chamonix. A route of mythical status put up by Mark Twight and Andy Parkin in 1991, the thin ice runnels don’t often form. It was awesome to finally tick off this route in January with fellow British guides Paul Swail and Dave Sharpe. Pitch after pitch of delicate ice smears amid austere and steep granite walls, it didn’t disappoint.

Taking advantage of a massive high pressure I joined up with Ben Tibbets and Valentine Fabre to traverse one of the longest ridges in the Vanoise. What would normally be fairly easy climbing in summertime, became tiring and difficult breaking trail up an endless AD ridge line in my Maestrale XT ski boots.

The season was soon back in full swing with February and early March shaping up very nicely. A freak storm on the Italian side of the Massif brought one of the biggest single dumps of snow I’ve ever seen. It certainly made my job easier, providing incredible conditions to my clients.

Below are a few highlights and a brief summary from mid-season:

One of my favorite lines on the Italian side, the Couloir Cache, leading down to the mighty Brenva Glacier.

Guiding the Cosmique Couloir in incredible conditions. It was a real treat to open this line with Leo.

Guiding the Passarelle Couloir with Cornel. We opened two classic steep lines off the Midi in one day, skiing powder all the way to the valley floor.

As I was skiing down one of the Vallee Blanche variants, I came upon a skier who’d fallen 20 plus meters down this crevasse. I managed to haul him out with the help of a couple of others. Miraculously, he was completely unhurt.

Finally, after two months of lockdown, it’s May 11th and the Aiguille du Midi is open again. Rushing down to the lift station early on a Saturday morning with my girlfriend and regular ski partner, Johanna, I’m greeted by a small crowd of familiar faces, local skiers and an ad hoc mix of nationalities and generations. This excited group comprises many of the strongest and most motivated riders in the valley. The buzz of excitement is intoxicating, and a part of Chamonix life that we have all been missing.

Mont Blanc Natural Resort, the company who own and operate the lift, have managed against the odds, to reopen the lift earlier than anyone expected. Slightly disappointingly, a very dry and warm spring made for on the whole sub-par ski conditions. But, as I put on my skis, pushed myself out the famous ice cave exit of the lift station and made my first turns on-top of the steep north face, I was happy to enjoy being fully in the moment. I was once again reconnected with a mountain and the community built around it which has formed such an integral part of my life.

You can find out more about Tom on his SCARPA profile by clicking here.