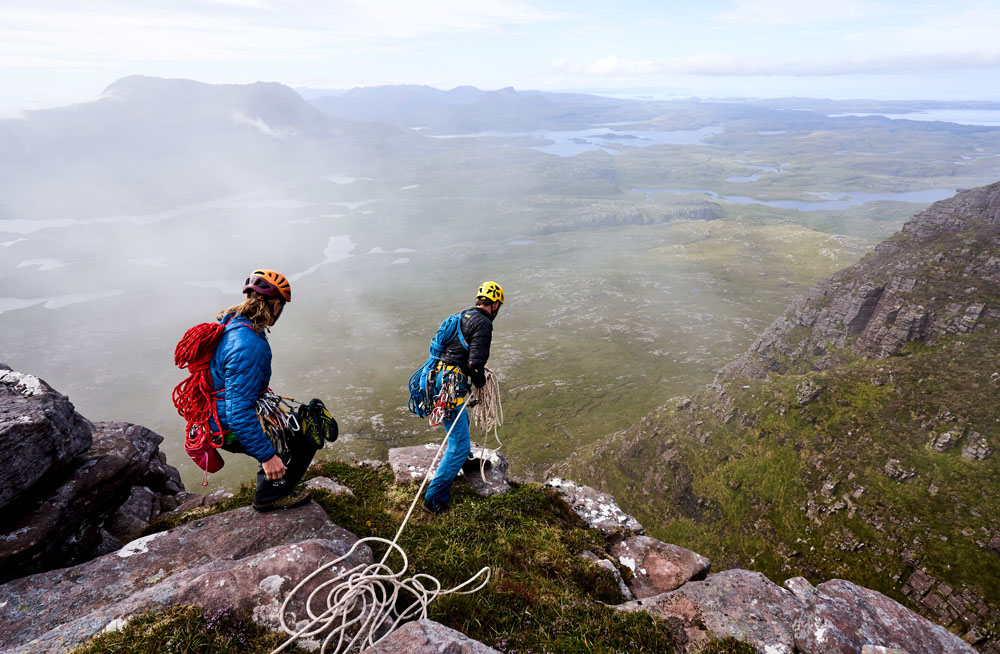 SCARPA athlete Guy Robertson used to stomp around Suilven as boy in search of a fat trout instead of unclimbed rock. This Summer, he finally climbed the mountain that loomed so large in his life.

Some mountains dominate, and Suilven is certainly one of them; looming like the hull of a great fossilised ship down on the sleepy village of Lochinver just to its west. Beyond the tiny houses lies nothing but open sea.

There are no other mountains immediately adjacent, just empty moor and bog.  When viewed from the North, the body of the mountain extends South eastwards for three kilometres, a long, airy and undulating ridge. One must resort to four points of contact to traverse from end to end. Indeed, an ascent of any of the various summits is always more than an easy walk.  The term iconic is most appropriate here.

Though I don’t live in Lochinver, Suilven has always loomed large in my life.  As a pre-teen boy I would regularly stomp the moors and hills that surround it, though in those days it was in search of fat trout instead of unclimbed rock.

Like its equally impressive neighbour, Quinag, just a few miles to the North, there’s no escaping it when you’re exploring the area either by road, bike or foot. One minute, as you dip down into the shade of another glen, it’s gone, causing you to blink, spin your head around and question your sanity.  Then round the next corner and it’s back – BOOM! Bigger and bolder than ever before.

It’s a genuine wonder that until this summer I’d never climbed it.  Maybe the anticipation was just too good, but for whatever reason, despite over three decades of climbing and mountaineering, exploring most of Scotland steeper hills, Suilven remained a mystery.  If I’m honest, I rather liked it that way; there’s always a sense of loss when something beautiful, enigmatic and inspiring becomes familiar and well understood.  The unknown is for me the most magnetic of all things.

As time has gone by and I have discovered more of Scotland’s cliffs, Suilven has come to me more and more.  A flash of ice on her flanks on a winter morning seen from a new route on Cul Mor. A flick of her cloud skirt on the descent from another long day cleaning new lines on Quinag’s Skull.  Then a vague memory of a conversation with Graeme Ettle back in the early 90’s – “there’s good rock up there, and bloody steep it is too” was his invitation.

Of course, I knew where the crag was – there was only one place it could have been.  There’s a little notch at the very south eastern end, below the summit of Meall Beag, only just visible from the hills to the north, and not obviously substantial.  But on the southern aspect – like all Suilven’s flanks – the ground drops away precipitously and that little notch overhangs a long, deep gully.

The only half-decent view is from Cul Mor’s northern coire.  By the time I got up in early August I knew it was going to be special; my imagination by that time had painted something wild and wondrous, beyond all compare.

Withered Crag.  So, named on account of its weird and ancient textured rock, and also because there is a dearth of positive holds, causing both mind and body to wither rapidly once committed on route.  The first line we climbed, without preparation, soon transformed from our imagined ‘introductory E2’ to a bold and alarmingly sloping E4 (The Lonely Mountain). It was at this point it clicked that the cliff held a court of its own.

The main event, however, was the huge smooth wall just left of centre – the far Northwest’s answer to Dinas Cromlech’s Lord of the Flies (E6) (albeit a tad further from the road). After such a feisty starter I knew that the easiest line up this altogether more impressive wall would need to be found, though with a bit of inspection and preparation it didn’t look unreasonably hard. Or at least so I’d thought.

As it turned out though, things didn’t go to plan.  A solo visit the night before to abseil the line and check the gear turned into a cold and gruelling ordeal in the teeth of a fierce, spitting Easterly.  I was left quite literally winded for an attempt the following day.  And although the day itself dawned dry and calm, and started out well enough, a series of unfortunate events thereafter ensued, resulting in the proverbial fight to the death.

On the first attempt, an unexpected slip just after the crux left tired arms and a loud, ticking clock.  It was after 5pm. Second go and things went slightly better, but then a nut wouldn’t sit, a vital cam was accidentally left behind and – worst of all by far – the solitary micro cam to protect the hard-upper wall just wouldn’t go in.

A good 8m of rope hung uninterrupted as I teetered precariously above a beckoning ledge.  Another little solitary cam winked up from just below this, and 5m of sustained, technical and balancey climbing lay between me and the next good holds above.  What should have been an exciting but relatively calm glory roll threatened to deteriorate into panic. “This is about as terrifying as I’m happy for climbing to get Hamish!”……

Then, at last, after what seemed like an age, the tiny cam sunk into its slot. I give it a wee tug, and it held.  Relaxing, I grabbed a glance out right over to Cul Mor and Stac Pollaidh, where the sun was throwing shafts of ochre as it began its slow descent. The wall had now returned to shade, the heat turned off and the rock cooling rapidly.  The friction level rose as fast as my heartbeat slowed.  Although success was still far from assured, the unknown now had a boundary reinstated.  I looked up, inhaled deeply and looked forward to finding out.