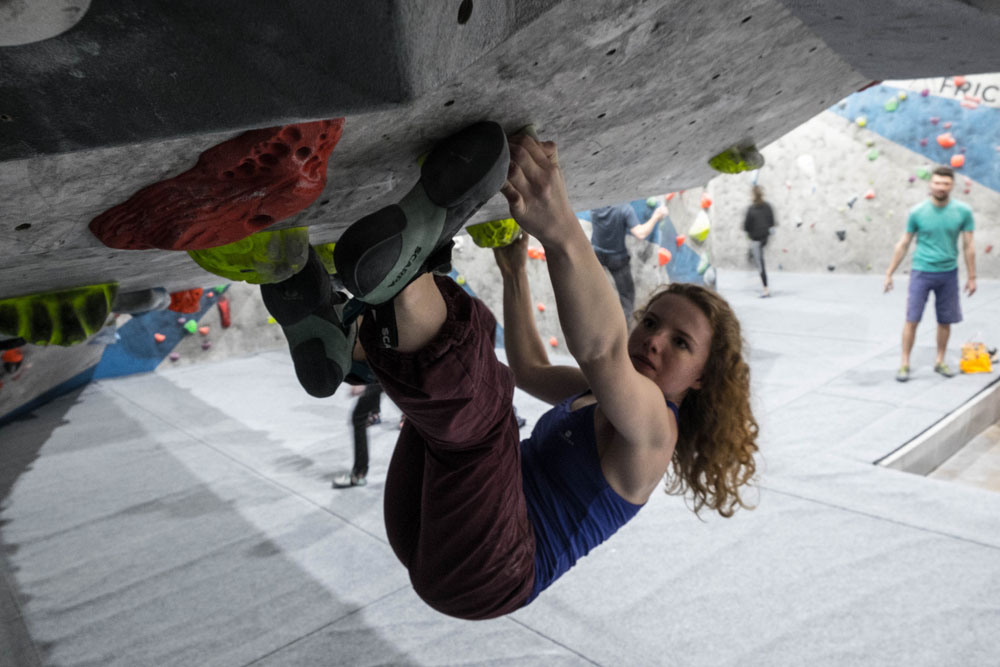 Following on from Robbie’s Guide Part 1 were he talked about the new Booster and Veloce models. This Guide goes into detail about the new Vapour Lace model that is due out this year and the Instinct VS Wmn which came into the range last year.

The Vapour is without a doubt SCARPA’s most popular shoe. Since 2009 it has gone through about four re-developments, and throughout has always maintained a very strong fan base. Historically the Vapour has been a great first performance-climbing shoe as it wasn’t too aggressively asymmetric or down-turned. The original Vapour was very stiff and because of this had a strong following from Trad climbers who like a lot of support through their feet, however during the first re-development, SCARPA softened it up quite a bit and it became a very different shoe. Since then both the Lace and Velcro have stood very close to one another with only very small variances separating them… that was until now!

Over the last few years SCARPA have been focusing heavily on softer more sensitive shoes, but this year they are taking a step towards the edging and precision based models, and with that it’s been great to see the new Vapour Lace diverging more from the Vapour V andreturning to it’s roots as a stiffer model. The idea behind this is not to create two completely different shoes, but instead to create a complimenting pair for the climbers who love the Vapour, but want two models that will do very different things.

What does it do?

The new Vapour Lace is drastically different to its predecessor. We’re talking stiff, potentially stiffer than a Maestro in some ways and because of this we can expect the Trad climbers, Multipitch fanatics, and slab technicians to come out of the woodwork for this re-iteration of the noughties classic. The old-skoolers will remember the original orange Vapour Lace that could stand on tiny crystals without budging… Good for you guys, because it’s coming back with the addition of some modern touches!

Last: The Vapour Lace last is exactly the same as the Vapour V last until about ¾ of the way down the length of the shoe, where it is shallower around the heel. This in combo with the new PAF heel system improves precision on the toes.

Heel System: The PAF heel system that I’ve continually mentioned throughout this article is also in use in the Vapour Lace, and similarly provides a wider more comfortable fit by spreading the forces more evenly across the heel. With the extra tension from elasticated rubber held on by the PAF heel system, the toes are pushed forward into the front of the toe box giving that extra precision we need for standing on small footholds. This heel system is front of shoe focused, meaning that what it might lose in very aggressive heel hooking, it makes up for by giving the wearer uncompromising support for edging on small footholds, and a heel that can function in almost all but the most aggressive heel hooks.

Upper: The new upper is softer and therefore more comfortable, but also completely synthetic making it part of the Vegan-friendly range of SCARPA shoes. As well as that though a fantastic new technology called D2 (Dual Density Rubber) is utilised on the toe, where two different types of rubber (M70 + M50) are liquefied and bonded to create a seamless rubber path from rand to toe. This allows the stiffer XSGrip2 rubber to provide maximal support around the toes, and the softer M50 to provide valuable grip for toe hooking and better comfort.

Midsole: The new midsole is stiffer than before by utilising a technique only seen in the Boostic. The midsole is wrapped around the edges of the shoe, in a sense containing the foot and preventing it from losing valuable support when standing on small footholds.

Sole: The use of a full length XSEdge Rubber sole provides yet more support along the entirety of the shoe, whereas on the Vapor V we only see a ¾ length XSGrip2 sole. Both have their advantages, but the Vapour Lace is built as a stiff and supportive model for low angled walls to compliment the Vapour V’s more flexible body which is more adapted for smearing and hooking on overhangs. The new Vapor Lace sole also wraps up under the arch of the foot following the contours of the midsole to provide even further support.

Volume: The volume of the Vapour Laces versus the Vapour Velcro is mostly the same with only a subtle change in the sculptured nature of the heel showing any real change to volume, but in reality you shouldn’t expect a difference to fit, just feel.

The Vapour Lace and Vapour Velcro have been on one hell of a journey, going from stiff to soft and back to stiff again. But now we’ve gone full circle we have a pair of shoes that compliment each other only too well!

The Vapour Velcro is the softer, more down-turned alternative ideal for a mix of steeper sport climbing, bouldering, indoor climbing and a combination of smearing/edging on lower angled walls when the time comes for it.

In terms of where it sits on the SCARPA family tree:

If you are looking for a new stiff shoe to balance your way up technical face climbs, then the Vapour Lace could be the model for you. Now that the Vapor Lace and Vapour Velcro have finally diverged, we can undo with the complications of trying to find a complimentary fit in an opposing style of shoe, as the Vapor now solves this issue. If you like the Vapour Lace, you will like the Vapor Velcro, and vice versa.

In an ideal world, a pair of Vapour Velcro’s would come with a pair of Vapour Laces – they are not meant to be apart. Like long lost twins they were separated at birth, two parts of a whole, a ying and a yang. Very similar, but also very different… Don’t break them up, be a good climber and keep the family together!

If there has been one shoe in the SCARPA collection that could be called the true all-rounder, it’s the Instinct. When it first came out all those years ago, it was an instant success – stiff, but not too rigid, and a technical fit that didn’t compromise on comfort. In the years that followed, the Instinct went through several re-iterations and it quickly became a family of Instinct’s with a velcro, lace, and slipper alternative, as well as a second softer Velcro model called the Instinct VS-R; identical to the Instinct VS, except it uses an XSGrip2 rubber sole instead of the stiffer XSEdge.

The growing popularity of the Instinct VS-R is not unfounded given the ever-increasing demand for softer shoes. In my opinion, XSGrip2 rubber is the most versatile, as it grips to footholds better than XSEdge, and with the supportive midsole and flexibility of the Instinct, you have probably the most versatile shoe in the climbing world. I have climbed balancy granite slabs in Yosemite, steep burly sandstone boulders in South Africa, technical limestone faces in the European Alps, and bold British trad climbs, all in a pair of Instinct VS-R’s. Hence the reason to finally extend the range to fitting even more foot shapes with a Low Volume Instinct VS.

What does it do?

First of, as much as the marketing says Instinct VS-W(omen), its not a shoe for women… I mean it is… but it also isn’t. The Instinct VS-W is in actual fact a Low Volume Instinct VS-R, and if you’re of the male persuasion, it won’t be seen as cross-dressing if you wear these. I’ve worn plenty of ladies shoes over the years just because they fit better, and that includes stilettos for when I want to feel fancy on nights out.

Last: The Instinct VS-W is built to a completely new last to the rest of the Instinct family. You might remember that the Instinct SR (slipper model) was built to a new last called the FJ last, bringing a narrower and more sculptured heel to an already wide-fitting shoe. Well the new Instinct VS-W is built to an even narrower last called FJW, which has an even shallower heel, bringing the toes forward for better precision, and a much narrower heel again for those with really slim heels. It’s worth noting though that the front of the shoe remains identical, providing that same wider forefoot that’s famous with the original Instinct’s in the FV Last.

And that’s it folks! There is really not much more to say about the Instinct VS-W as it’s really just a re-working of an already world-class climbing shoe in order to bring it to even more climbers.

In terms of where it sits on the SCARPA family tree:

The bottom line is that the Instinct VS-R and VS-W are the most versatile climbing shoe in the world. There is no other reason why it’s the most popular shoe amongst top climbers. I know competition climbers who both train and compete in them, world-class boulderers who won’t put on another shoe, top sport climbers who’ve climbed some of the hardest routes in the world in them, and Trad climbers who love them more than their gear rack!

If you’re one of the 95% of climbers who boulder, sport climb, train indoors and dabble in a bit of fun trad, then if there was one shoe to fit all, it would be the Instinct VS-R (VS-W). It does everything very well, and a few things at a world class level, the ultimate all-rounder… but I don’t recommend doing Everest in them!

As the dark Lord Heinz once uttered in the deep, dark, depths of the SCARPA factory in Italy:

In the land of SCARPA where the rubber lies,

One Shoe to rule them all,

One Shoe to send them,

One Shoe to fit them all,

And on the rock face climb them!

This concludes Robbie’s two part guide on the next generation of SCARPA shoes. Thanks Robbie as always for these very informative guides.