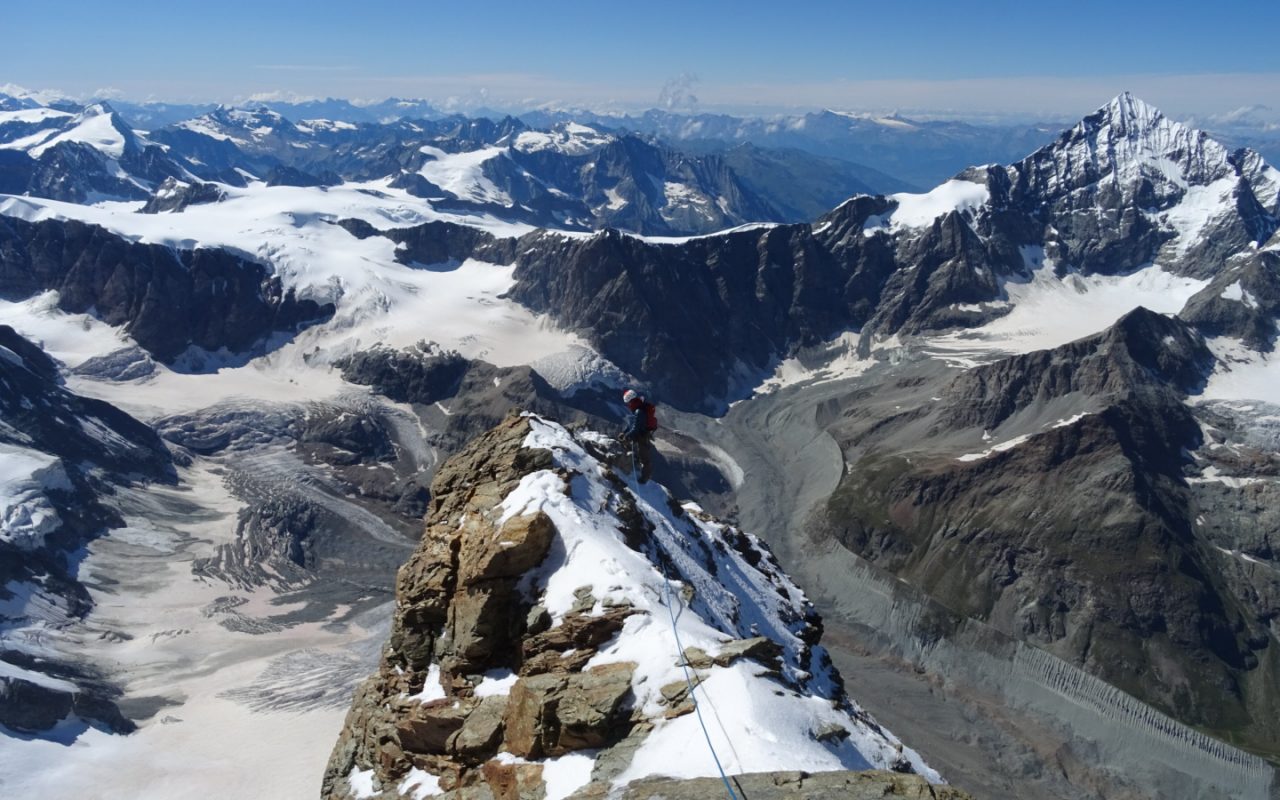 In August John McCune and fellow Scarpa Athlete Callum Muskett set out to climb the North Face of the Matterhorn. In this latest blog John takes us through their ascent.

Schmid Route on the North Face of the Matterhorn. TD 1100m

At the start of August I had the opportunity to climb the North Face of the Matterhorn. I had a few days off work, and the mountains were unseasonably snowy. There was a weather window of two days and Calum Muskett was enormously motivated and looking for a partner.

Normally mid summer I’m really motivated for alpine rock routes, but with a frustrating finger injury climbing a big mixed route was a welcome distraction. Both Calum and I had been guiding a lot, and both of us had recently guided on the Matterhorn’s Hornli Ridge. We had seen the North face up close and heard that it had been climbed. We both felt confident that it should still be in good condition.

We made a quick plan and Calum picked me up on Thursday morning and we drove over to Zermatt. The forecast looked good for Friday, just windy and cold.

I was keen to bivouac and instead of staying in the Hornli Hut. Partially I often prefer to bivouac under the stars, besides we were going to be getting up so early it seemed silly to pay a lot for a very short nights sleep in a bed. We tiptoed past the hut and found a hidden spot close to the start of the route. It was a windy bivouac, and not particularly warm for August, and I don’t think I slept much.

Climbing the North Face of the Matterhorn

Starting around 4am we soloed up the start of the climb in the dark. Hundreds of meters of steep snow, breaking a trail, taking great care to find the correct way. With the beam of our headlamps we scanned the world of steep blank whiteness for the starting features of the ramp.

Putting the rope on for some steep brittle ice, we simul climbed into the dawn. In the early light we were now confident that we could make out the ramp cutting right across the face through improbable terrain above and below. The snow was firm and good for climbing but the rocks were also fairly plastered with ice and verglas. This was fine, it just took a little longer to find gear to protect the climbing.

Once established on the ramp we climbed long pitches between the peg belays we were lucky enough to find. In better conditions maybe we would have simul climbed a lot more of this, but pitching seemed sensible as finding gear was a considerable challenge, and the insecure nature of the poor quality sloped rock covered in thin ice felt serious.
Towards the end of the ramp is the icefall.

This leads out of the ramp and towards the upper part of the face. Its a long pitch up a beautiful formation. The ice was thick, but it was also very hard and brittle. It was smooth and gleaming, having been polished by wind and spindrift for the last weeks. It was my lead and I was happy to place all the screws we had protecting the 60m pitch on the exposed ice. After this Calum took us across the precarious traverse on delicate rock rightwards to the summit slopes.

I felt maybe this was where the route was in the worst conditions as there was not much neve or snow. The rock under the shallow snow and ice was terrible and it was very hard to protect. A few lengths of slow and careful simul climbing brought us to the Smutt ridge which defines the right hand side of the North face. The best moment in all of that simul climbing was finding a mysterious single bolt which I put the micro traxion on.

This was the only effective protection in 120m of climbing. There were also a few shallow ice screws that soon bumped into the rock underneath. After reaching the Smutt ridge we gunned for the top. It was a glorious afternoon on the top, however it was windy and we had the long descent down the Hornli ridge to come. We both know the Hornli ridge very well from countless guided ascents of the mountain, however I had never experienced it covered in so much snow.

Normally I would be content to solo down climb the ridge but I was actually pretty spooked out down climbing the insecure moves covered in powder. Calum agreed to keeping the rope on as we down climbed and with a few abseils we made progress down the mountain getting to the hut just before dark.

We were both pretty tired but happy to have climbed the route, particularly as it was the middle of the summer and it seemed like such a novelty to be able to climb a great icy North face in August.

For me it was also the last of the 6 classic North Faces of the Alps. Ticking them all off was never my priority and I’ve done them all when the opportunities arose, climbing multiple routes on some of the other faces. Being in the right place at the right time for the Matterhorn seemed to take the most patience, waiting for six years after I had climbed the others.

With recent snowfalls throughout the last few weeks the North faces of the alps are looking good for what could be some great mixed climbing this autumn.