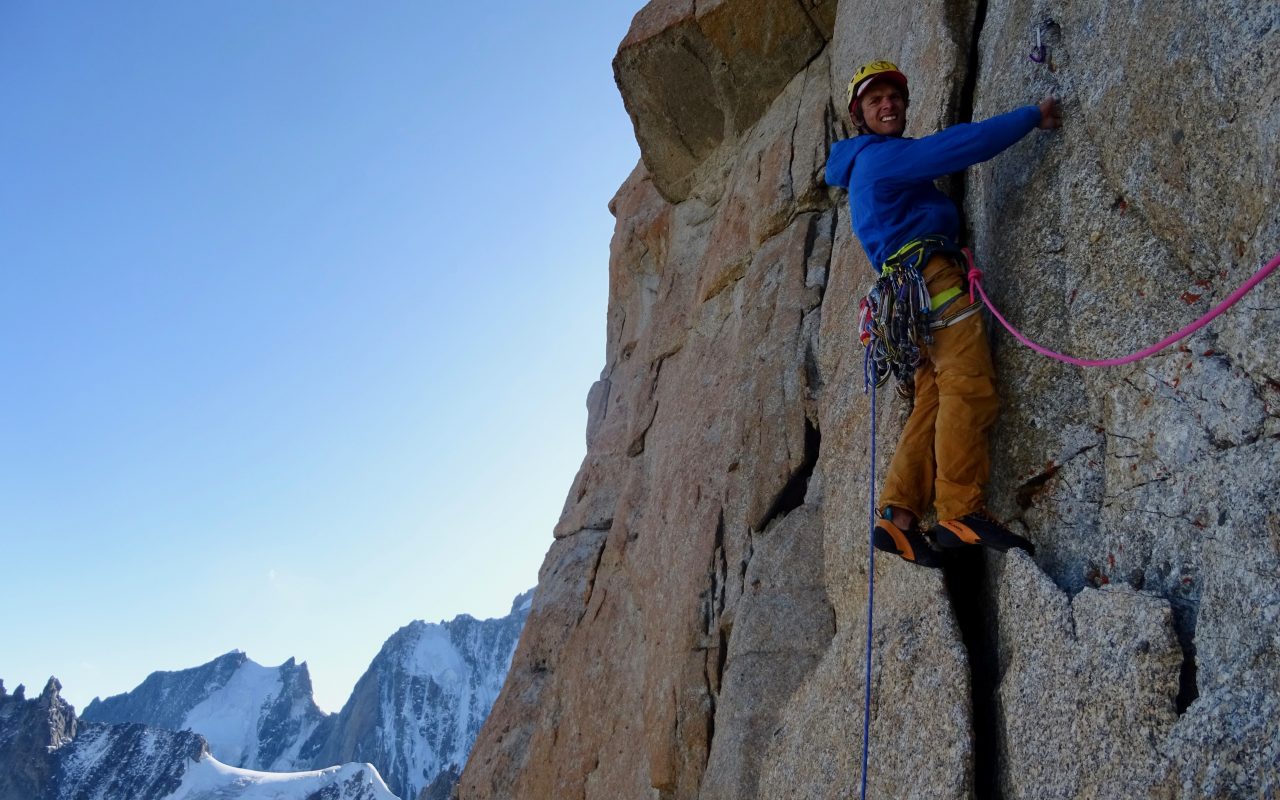 SCARPA athlete John McCune shares with us his account of his successful Summer climbing in France. He found the time in between his busy working schedule to tick off two famous hard routes. Read more below:

I was delighted to climb the Voie Petit at the end of September. It was a real treat to send this famous hard route at the end of a very busy Summer. Established by Arnaud Petit in 1997, the route was first freed by Tomas Huber in 2005. It remains the hardest free rock climb on the Chamonix Granite. I did a lot of guiding work which is great but sometimes it’s hard to find time and energy for personal projects.

Over the July and August, I had a few days off and managed to get some good routes done. In the middle of the Summer I had a little break and Jonny Baker and I climbed Arnaud Petit’s and Nina Caprez’s new route on the Grand Capucin – L’or du temps 450m ABO 7c+. It’s an incredible line. I had met Nina on the cable car one day and she really recommended trying it.

It was awesome to Onsight the entire route. It felt like a little bit of a mystery, having been originally given 8a then 7c+. It felt easier than that and I was thinking it is maybe more like 7c, as I don’t Onsight 8a often and at nearly 4000m it would be unlikely.

Whatever the grade, it is an absolute belter of a route and features very fun steep climbing. The day after we climbed Echo des Alpages ED 7a, which is an older classic but one of the best routes on the mountain. In August I managed to finish off some old business, climbing the roof crack of Ma Dalton ABO 7b+. The famous roof crack is the hardest route on the South Face of the Aiguille du Midi. It was great to keep the motivation up and pull some great moves that I had tried before but hadn’t managed to free. It is the Separate Reality of the Alps, but substantially harder.

At the end of the Summer I was looking forward to a bit of time off to really try the Voie Petit. I kept a few weeks in September free, and did some pull ups and hang boarding throughout my last few weeks of work. When that time off eventually came in mid-September, it wasn’t looking very likely.

Firstly, I thought I had broken my bum in an enthusiastic bum slide coming down the final snow slope off the Aiguille du Peigne. I had a lot of pain, which thankfully improved but I wasn’t sure how hard climbing would feel. I was able to carefully finish all my work. Then I got sick on the last Mont Blanc and I had to spend my first 3 days off in bed. And then I couldn’t get anyone to try it with me. All the regulars were busy. But I was determined to try and make it happen.

I managed to get a crack on it spending two days up there with a young keen Chamoniard, Tom. It was great to figure out the moves particularly on the 8b pitch. But he wasn’t feeling it for the route this time, so we didn’t get much further up than that pitch. I came down, inspired, but feeling frustrated that it wasn’t going to happen this year. It was going to be a massive project for me, and the days were getting shorter and I had to work again in a week.

But the weather was still perfect. I had to try and do it. I figured I should rope solo up as high as I could and try and figure out some of the upper pitches. One thing that I had discussed with Tom, was the way in which Caroline Ciavaldini had climbed it, taking the bivouac on the Bonatti ledge and finishing the top pitches the second day. I thought I could do all the bottom section now, I just needed to get to the top bit. I ropey soloed up the Direct du Capucin and swung into the 7c+ pitch that follows the 8b. I managed to figure out the beta for this and thought if I could get a belayer I’d be able to climb all the pitches to the Bonatti ledge, then have a bivi and climb the rest the next day. I met my friend Freja Shannon, who had just climbed the Bonatti route with Heather Florence, as I walked back across the glacier. I happily tied into their rope. Freja was buzzing and volunteered to give me a belay, if I taught her some big wall stuff, paid for her expenses and made sure she was back down for the rave on Saturday evening.

I had a rest day and went back up with Freja on the Friday morning. I felt better and quite optimistic. The first pitches all went well. There’s a bunch of 6’s and a fairly bold 7b. Generally, the route is protected with the notion that if you are there to climb 8b, then the grade 6 bits don’t need protected much and the grade 7 bits can be just be a bit spicy. Fair enough really.

It is all engaging. I hauled the big bag as efficiently as possible to save my energy for the harder pitches, but it was always on my mind that the 8b was going to require a big effort. I climbed as smoothly as I could and tried hard through the roof. I didn’t think I would have the energy to have multiple goes at this pitch, so it was a relief to do it first go. The superbly technical 7c+ pitch went first go too. I just had one more hard pitch to get to the ledge. This 7b+ was tricky and I fell off, but then did it on the second go. We excavated the big rocky the ledge a little too make a nice flat spot. It was surprisingly warm, and it was much more pleasant than sleeping in the tent on the glacier on previous occasions. The light was incredible, and it was a beautifully still night. We watched an episode of Father Ted and drank tea and whiskey. Perfecto!

I quested up the 8a pitch which I hadn’t been on before and I figured out the moves. When I was ready the next morning, I gave it a go on lead, and it all worked perfectly. The rest of the pitches are more moderate, but on perfect golden granite. There is one last 7b pitch which I knew I had to Onsight to get Freja back in time for the rave. I had to fight hard, and it was no pushover, but I squeezed those crystals tight and focused to the end. Topping out was cool in perfect crisp autumnal weather with a huge sea of cloud below and over Italy.

We took the summit selfie and got going with the abseils, on an efficiency mission to make the last cable car down. We got down in good time and drank some cappuccinos. Then we went to the party and had a great dance!!

You can keep up to date with John’s adventures here and keep and eye on our social pages .