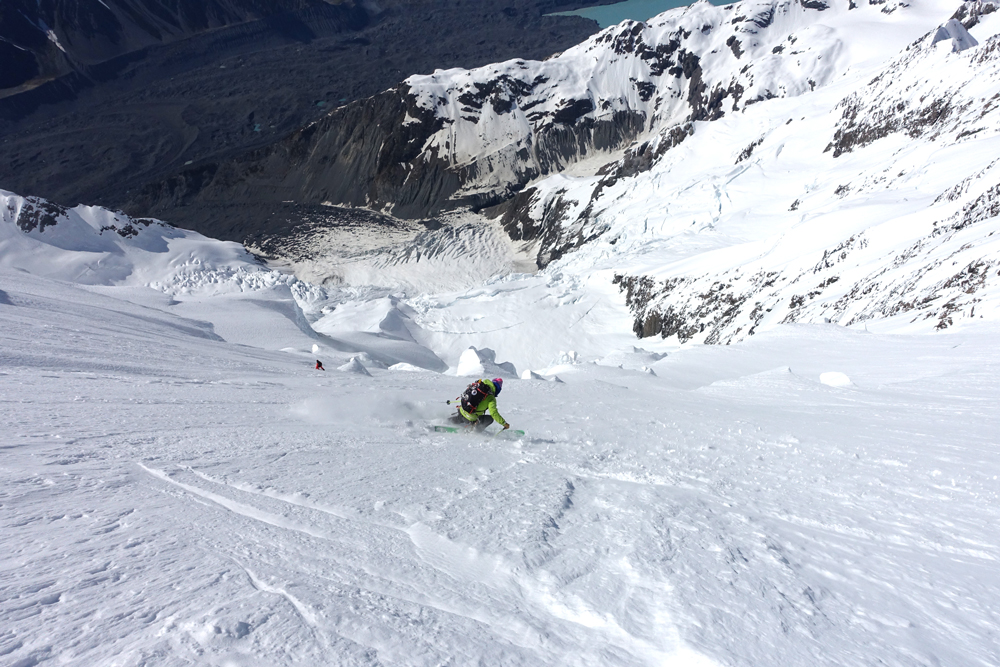 Scarpa Athlete Tom Grant tells us about his descent of the avalanche swept Caroline face of Mount Cook, the highest mountain in New Zealand. The 2000m face was unskied until recently when Tom, Ben Briggs, and Enrico Mosetti tackled the ice cliffs of the colossal face. 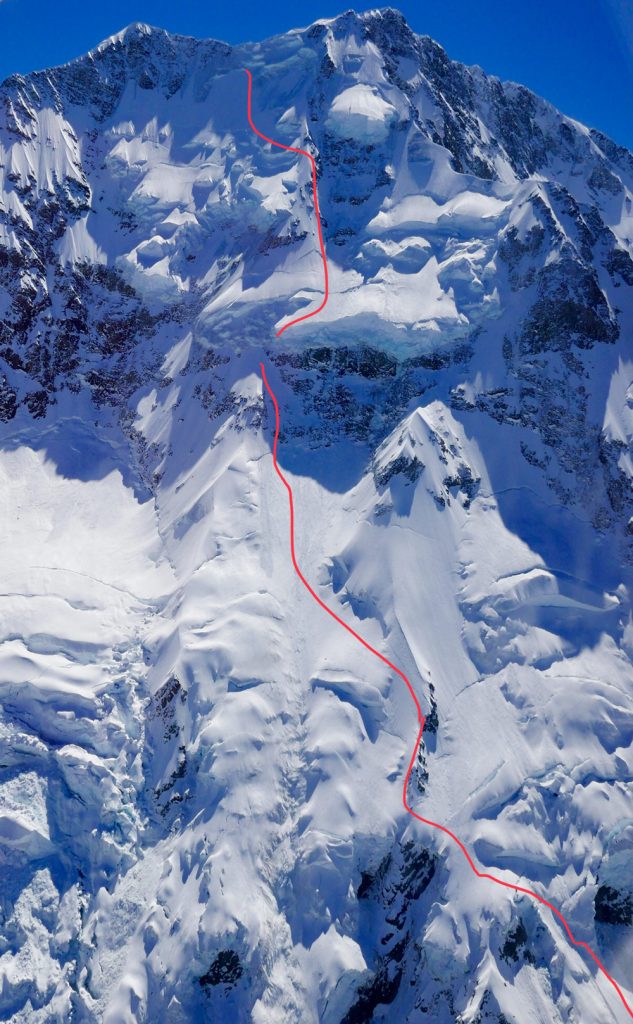 The line taken down the Caroline Face

Hi Tom, the line you chose to take looks pretty sketchy, what can you tell us about the scale of the challenge of the Caroline face for a technical ski mountaineer?

“The Caroline face presents an awesome challenge for ski mountaineers thanks to its size, complexity, and actually great skiability! There is no easy way up, and the line is as much a mountaineering challenge as anything. The skiing is continually exposed, but never extremely steep and demands a very efficient approach to the descent to minimize exposure to the seracs. The face is huge, complex and in our opinion too dangerous to climb.

One of the main challenges with this sort of line is having to nail the route finding while skiing it ‘onsight’. The three of us were blown away by the sheer size of the face and a route finding error could have landed us in a really bad spot. The challenge presented by the Caroline is also very conditions dependent, and every year the seracs change on the face. We got lucky this year with how the seracs had formed, but who knows, maybe in the future, the line will go without rappel!” 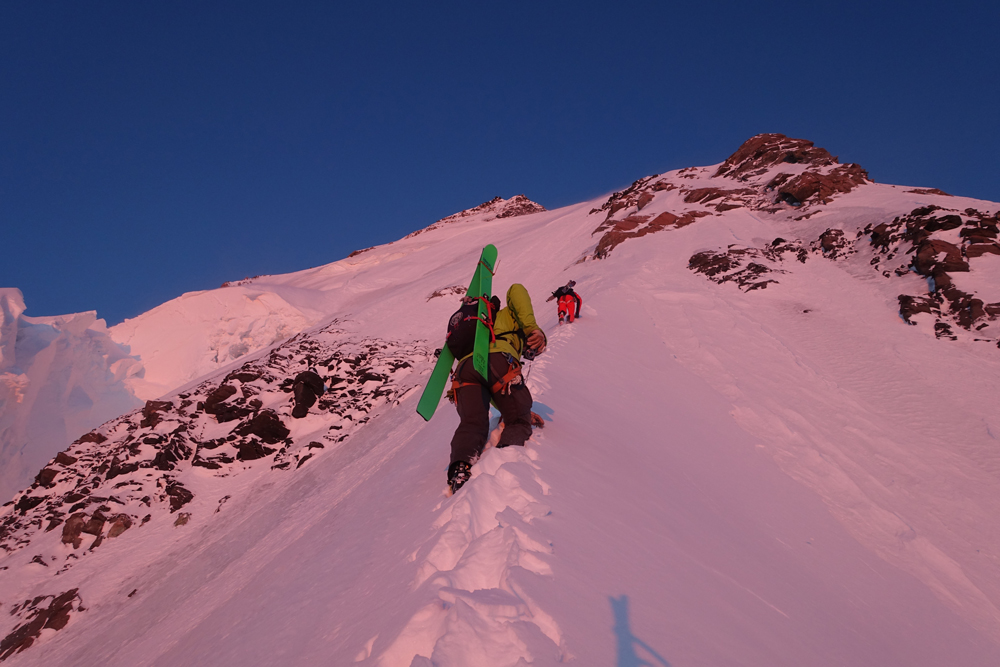 How did you choose the line and overcome the obvious route finding difficulties?

“We wanted to ski the most aesthetic and direct route that conditions would allow for, ideally following most of the ‘Clit’ route, the line of the first ascent of the face in 1970. However, the top of the climbing line doesn’t really hold snow so we chose to abseil in from Porter Col on V threads. This was a logical line and gave amazing skiing on the upper face.

“My biggest fear on almost any ski descent isn’t of falling myself, but of avalanches”

Ben, Enrico and I extensively scouted the face from the heli ride in and on two separate days, skinning to a good spot from which to view it. We spotted a line of weakness in the huge middle serac band that we were able to ski into and setup just one 40m abseil reasonably safely. This was the key to unlocking the face. When we were skiing, we had good pictures on our cameras to help us, but there were still moments we had to stop and really contemplate the line. It always looks different to be on a big line rather than from viewing the route face on while scouting it.”

How did you prepare for the day of the descent?

“We tried to get an early night! Our alarm was set for midnight, so getting much sleep wasn’t easy. We made sure we felt well rested and fed, double checked our gear and tried to relax. The three of us got a few warm up turns on a very small but steep couloir a couple days before, but we didn’t have the chance to ski anything else in the build up to the Caroline, we just had to go for it. None of us had been on skis since last May.”

The ascent of Mount Cook is a challenge in itself, how did you and the team ascend the mountain initially?

“Our team climbed the East Ridge, which is a really cool alpine route in its own right. We battled through some chest deep breakable crust, climbed delicate and exposed snow aretes and had some steeper ice at the top.

“The only skiable Alpine face comparable in size is perhaps the East Face of Monte Rosa, but it’s a far more simple undertaking.”

Overall, we had to ascend 1600m to where we topped out. At the start we were really putting a ‘trench’ in deep snow on a 50 degree face which cost us some time and energy. It was pretty disheartening, but we just kept going hoping it would improve which eventually it did.”

A previous attempt to ski this line in 2013 had resulted in the tragic death of Magnus Kastengren, what were conditions on the day of the descent and what were the main dangers you faced?

“Magnus tragically fell on the exposed slope above Porter Col due to a binding failure or technical mistake, I don’t think anyone will ever know. However, my biggest fear on almost any ski descent isn’t of falling myself, but of avalanches, either skier triggered or spontaneous ones overhead. There had been a fair bit of new snow and wind the previous days, but the face was nicely sheltered from the wind and the snow felt very stable. We were under some nasty seracs for brief sections, but the only thing to do was to carry on skiing quickly and confidently; seracs are inherently unpredictable.” 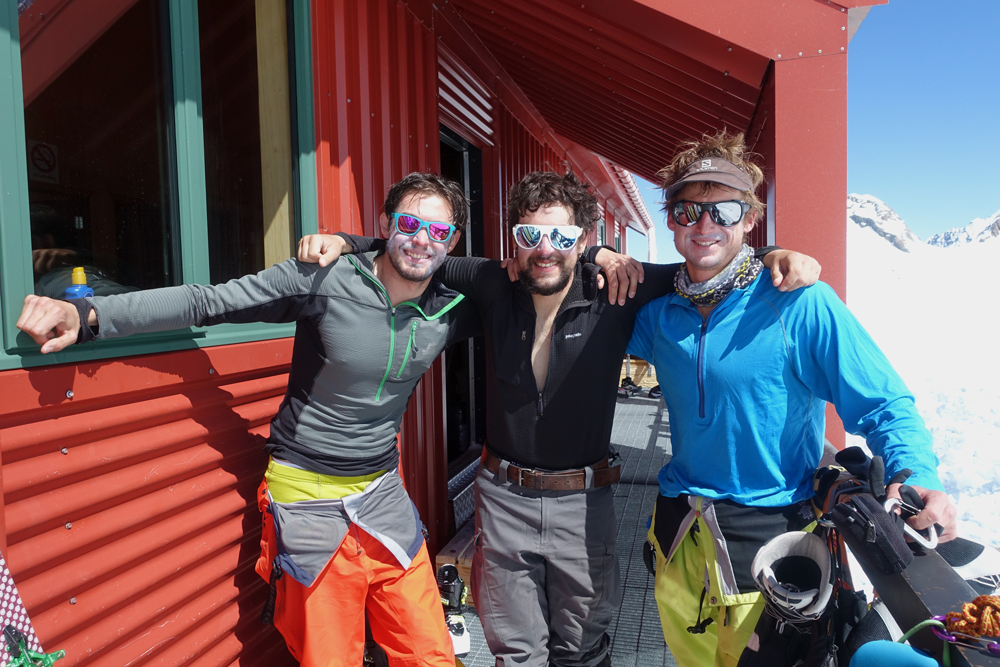 How does this route compare to some of the European lines you’ve skied?

“The only line in Europe I’ve skied which comes close to the level of commitment and exposure of skiing the Caroline Face is the Sentinel Rouge couloir on Mont Blanc’s Brenva Face. However, the Caroline simply bigger than any steep line in the Alps. The only skiable Alpine face comparable in size is perhaps the East Face of Monte Rosa, but it’s a far more simple undertaking.”

What’s next after this, anything else in New Zealand?

“We just got back from skiing our second main objective in NZ, the first descent of Malte Brun! It’s a shorter but really cool and very technical line on a prominent and famous unskied peak. Now we are off to do some touristy stuff while the weather is bad and maybe head back in for one last trip to around Mt. Aspiring. And then we are all very much looking forward to the start of the winter back home in the Alps.”

Tom and Enrico Mosetti (A Scarpa Italy Athlete) both used the Scarpa Maestrale RS boot for this challenge.
“We both agree they are the best touring boots we have ever used”

You can get more information about Tom on his Scarpa® Team page and keep up to date with his latest exploits from around the world.