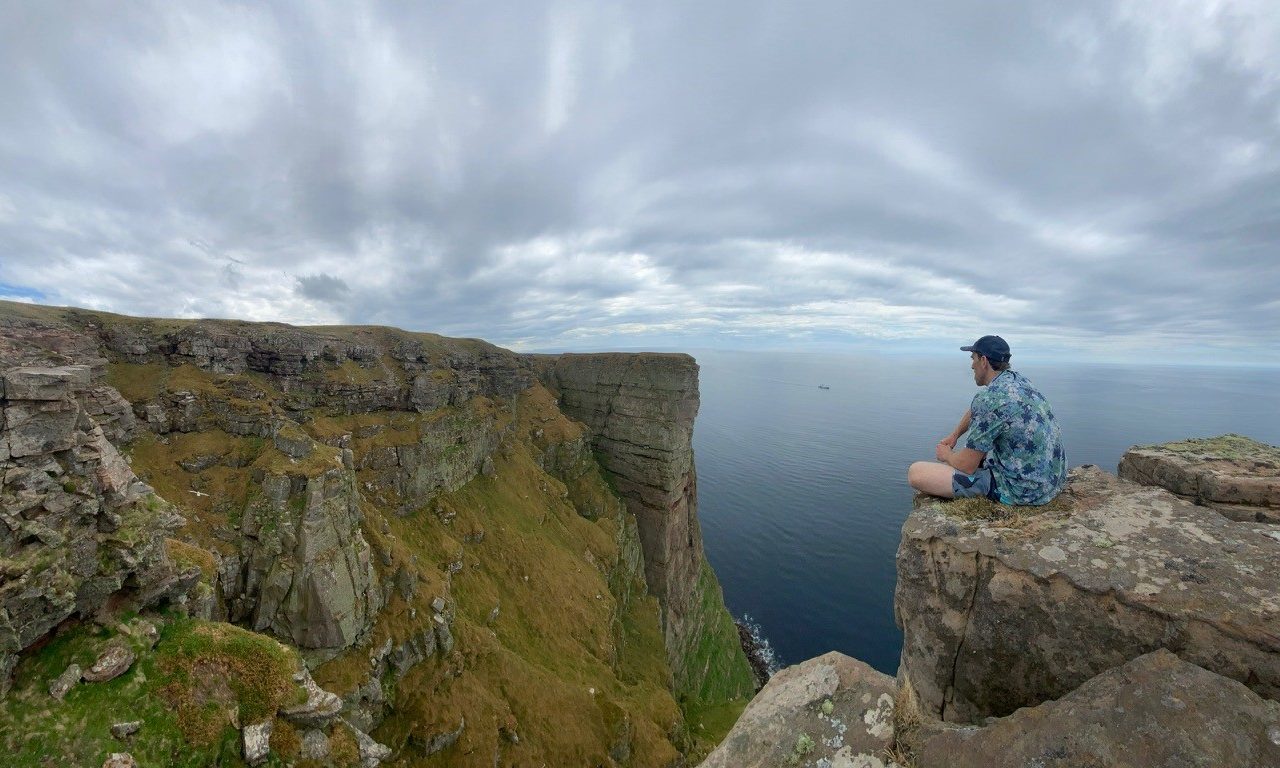 If you are reading this your probably already know who Robbie Philips is, he has been consistently pushing his climbing for years now and does a million other things around the world of climbing.

We caught up with Robbie Phillips to discuss the realities of his life as a ‘full time’ climber, social media and how he stays so pumped!

Robbie, you have been part of the Scarpa team and around the world of climbing for quite a few years now, how does it feel to be one of the elder statesmen?

HA! Haven’t you heard, 31 is the new 21 – there’s life in these ole bones yet! To be honest, time flies when you’re having fun, and I’m still trying hard and getting better every year… Talk to me again at 41 and the answer probably won’t have changed.

Certainly as I’m getting older though, I’m finding more and more inspiration in guys like Ted Kingsnorth, Guy Robertson and Matt Helliker, who are all 10-20 years older than me, and still getting better! But equally, the SCARPA UK team has some phenomenal young talent coming through that are disgustingly strong and using it well!

“if I’m not able to go climbing when I want, what’s the actual point of it all?”

Climber, YouTuber, Rock Shoe Guru, coach, public speaker, the list goes on. How do you balance all that you do?

With difficulty! Climbing ALWAYS comes first, which is probably why I’m terrible at meeting deadlines! I’ll more often than not be lead astray by a friend with a project for me to check out somewhere haha! But when I left university 6 weeks in to follow my passion as a climber, it wasn’t to make plenty of money, so if I’m not able to go climbing when I want, what’s the actual point of it all?

Saying that, I see the value in having a career that’s purposeful and supports my climbing. I’ve been lucky enough to carve a little niche in the climbing industry doing things I enjoy such as teaching people climbing, talking to people about climbing and making videos about climbing – the YouTube channel is a newer addition that has sparked the creative side of me and I’m keen to do a lot more with the channel and in film production.

But bottom line, I basically climb and try to fit everything in around that… it doesn’t always work, but it’s the best lifestyle balance for me.

Do you have a favourite part of your work outside of climbing? Or is it all a means to be able to climb as much as possible?

I love different aspects of my work, and certainly some fall in and out of favour at different times. If I don’t do much coaching in a while, I get psyched to go back to it… at the moment I’m loving video editing and doing a lot of that, but next year I’m keen to get back into writing!

I love the variety of my career, which means I’m never bored! But yeah, it is all a means to be able to go climbing as much as possible… it just so happens I enjoy the work too.

You’ve amassed quite a large following on YouTube and Instagram. Do you feel the pressure to continuously up the ante and do bigger and wilder things?

Yes and no… When I started the YouTube channel I put a bit of pressure to release a video every week, but I soon realised that wasn’t sustainable for me. For me to be able to focus on becoming a better climber and to achieve my potential, I can’t be a full-time YouTuber releasing new more exciting stuff every week. Eventually it just becomes rubbish content, which quite frankly I’m not interested in creating.

Beyond the video creation I have never felt pressure to achieve from social media. I’ve always wanted what I put out there on social media to mean something, and to be healthy shares, as opposed to just about hard grades and successful adventures. Right now for instance, I haven’t sent something hard in a while because I’ve been training for a project… That’s just it; you can’t be firing on all cylinders every week, and I have to be content with that.

“being a self-employed pro climber isn’t as simple as having a normal job… but still, I wouldn’t trade it.”

You are fortunate enough to climb for a living, that sounds glamourous and ideal for those of us who work a 9-5, but what are the realities of making a career out of something you love?

Well for one, it took ages to get to a point that felt comfortably sustainable. I was working a lot more than any 9-5 for a long period and there was a time I was genuinely worried it wouldn’t work out.

Secondly, your passion becomes work, which can become detrimental to your enjoyment of it… This is why I take on such a variety of things – to keep things interesting and so I don’t get bored. I worked for years in climbing centres and noticed that my drive to train indoors was stunted for a short time… as soon as I stepped away from working as much indoors the drive came back.

Lastly and most importantly, you NEVER stop working e.g. right now I’m sitting in my van parked next to a crag where I have a project; it’s 23:30 at night and I’m answering these questions for SCARPA UK Blog!

I have one of these unfortunate ADHD brains that never stops thinking, which means I’m always needing to do something and I burn out quite easily. I’ll go to sleep soon, but get up early because I always do, stretch, and start on emails before breakfast so I can get some work done before going climbing… That’s life as a “Pro” climber (The “Pro” is important because nobody pays me to just climb – it’s not that simple)

I’ve met lots of “Pro” climbers who couldn’t hack it and went back to a normal job. They are happier now. They say that the 9-5 gives them structure, security, better pay and with the right job, the holidays are adequate for them. As my number 1 goal has always been to climb as much as possible, the money didn’t really bother me too much, but now I’m older and having to be a grown up and pay for grown up things like pensions, mortgage, pet insurance and other grown up stuff, being a self-employed pro climber isn’t as simple as having a normal job… but still, I wouldn’t trade it.

Like the rest of us you’ve had to stay closer to home in the last 18 months, where have you enjoyed visiting around the UK?

Seriously… I’ve barely left Scotland this whole time! I went to the Lakes twice which was great, but I’ve been passionately obsessed to roam the highlands and islands, searching for the next big thing.

I have found a number of unclimbed lines I’m eager to go back to Skye for, and two unfinished projects on Hoy left for Spring… an 8B boulder at Dumbarton I need to get finished… oh and my E10 project I’m parked beside now which I’ll hopefully lead any day now… If anything, the last 18 months has driven home to me how amazing the British Isles are, especially Scotland, and I’m more psyched than ever to explore my home country far and wide for the best climbs!

You’ve also been trying some ‘urban climbing’ exploring local bridges and other man-made challenges! Tell us about that.

I found these awesome bridges in Edinburgh, which basically have perfect horizontal concrete cracks ideal for climbing on. I found the place and started developing it, but my friend Andy Hein has put the real work in! When the weather got good and I went back to “real” climbing, Andy kept on going – he has a full time 9-5 job in the city so it’s a no brainer for him to keep at it.

I introduced the WideBoyz to it and they loved it, so they went looking for more and found some in England… but quite frankly, it’s just indoor climbing. I enjoy it, but it’s not IT for me. I’m happiest in the crags and mountains climbing on real rock in beautiful places.

The urban crack scene is crazy fun and good training for roof cracks, but that’s about it… I’m sure we will have some amazing 5.14 crack climbers in Edinburgh as a result, and I’m really psyched I’ve shown people what’s possible in the urban jungle. No doubt I’ll be back down there for some months hard training on the build up to a crack trip… but not anytime soon 😛 haha

From watching your videos, you can tell that your still get really pumped on climbing, what is it that keeps you so motivated and excited about climbing?

It’s really good fun! That’s it… I’ve really got no idea where my motivation comes from. It’s internal and pure. I love almost every aspect of climbing, and a life without it would seem a really sad existence for me… The YouTube channel is an opportunity for me to share that energy, motivation and knowledge with others.

Looking to the future, what plans have you got coming up? Are there any big projects you are looking to tick off?

Hoping to tick my big trad project in the coming week… (watch this space… if I haven’t broken my legs!) Also next year go back to Hoy and Skye… I have a project in Suilven I wanna try… Also travel to St Kilda and Eigg… I’d be keen on repeating some harder routes in the Lakes and maybe South West of England too… Lots to look forward to in 2022 and as always, not enough time! Haha!

This is the first in our series of blogs focusing on our amazing Scarpa Team, keep your eyes peeled for more.