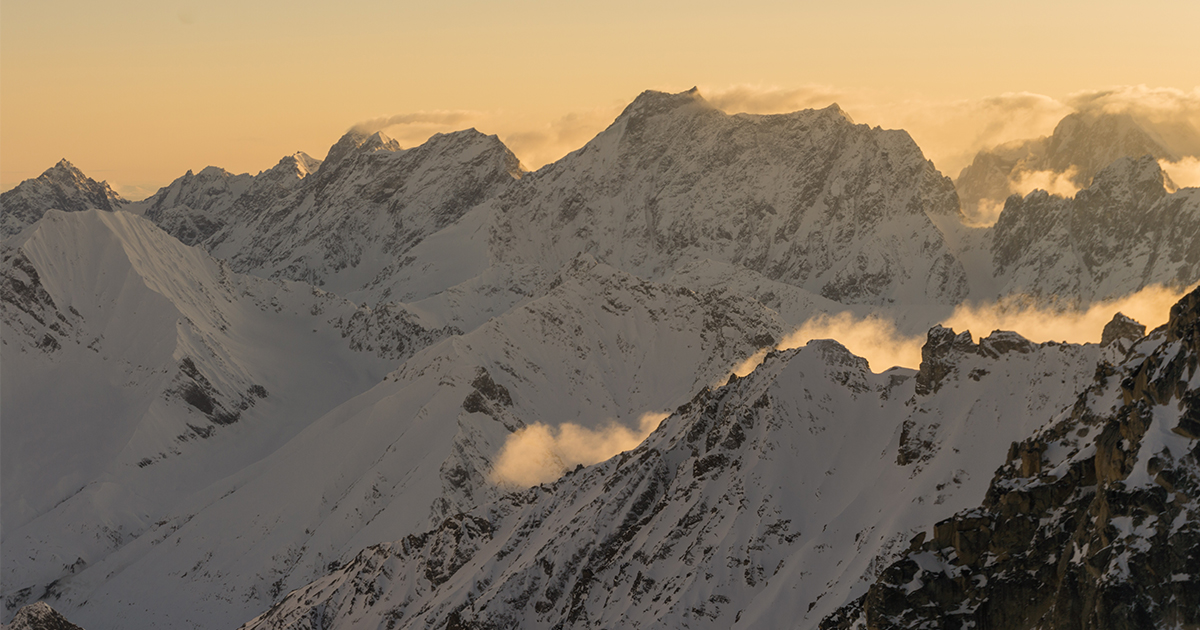 Scarpa Athlete Uisdean Hawthorn has just arrived back in the UK after 3 weeks in the Revelation Mountains, Alaska. Uisdean and his climbing partner Tom Livingstone had one main target for the trip the unclimbed 3800ft North Face of Mt Jezebel.

“We both stared intently at the north face of Mt. Jezebel, our main objective of the trip… It looks steep, cold and cool” 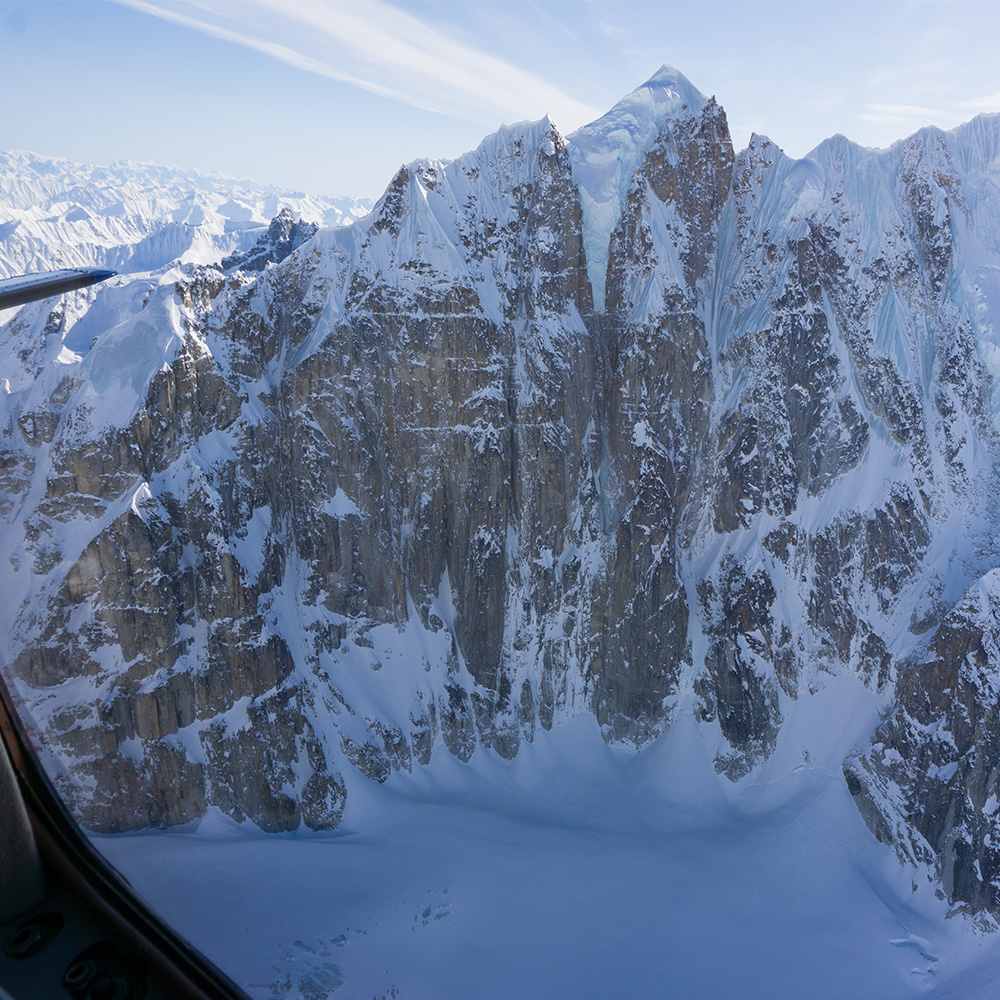 The North Face of Mt. Jezebel from the plane ride into Revalations- photo by Tom Livingstone

The two mountaineers flew into the Revelations from Talkeetna a remote townlet 2 hours north of Anchorage which would be the last chance they had to experience a hot shower and stock up on supplies before 3 weeks in the shadow of the Revelations.

“Ten days later, Tom and I stood on a snow patch a third of the way up the route. We looked up an overhanging 10m-wide chimney, with a massive snow mushroom blocking it. Below was 40m of vertical sugar snow, with not a drop of ice in sight. Grudgingly we agreed that it wasn’t possible. We began the horrible process of abseiling down the 8 pitches we had just climbed, most of which were 70m long
We eventually made it down to the glacier, skiing back to base camp on the east side of the mountain later that night.”

After this set back the guys spent the next few days reenergising at basecamp, eating interspersed with skiing, while waiting for the weather to clear. After a couple of false 3am starts  while waiting for the right conditions,  Uisdean and Tom were able to attempt their second objective; a new route on the East Face of Mt. Jezebel. Uisdeans describes this 2-day ascent here:

“The next day, the alarm sounded at 3 am again. This time the stars were on show. Then came the usual faff and attempts to eat breakfast without feeling ill. By 6 am I was following, Tom stepping over the bergschrund and onto the route. I tied in, racked up and started climbing up an 85-degree neve for 30 metres. Thankfully it had two runners in the rock at 15m. After 30m it steepened and quickly became vertical sugar snow and quite serious. I inched towards some rock in a corner below a roof.

Eventually, after thinking light thoughts and digging lots I found some good runners under the roof. I climbed the rocks on the right of the roof and shouted, ‘Watch me!” before climbing out left to step around the roof. As I moved my feet round, the snow under the roof all collapsed, and I hung off my axes.  I quickly pulled up and did a campus but with my body smeared on the ice. I took a moment to relax once established on the ice.

The next two pitches weren’t as hard but had a total of four runners and some worryingly steep sections of neve. Tom took over the next pitch which had some hard digging up vertical snow chimneys with some interesting moves but thankfully there were more runners. Tom’s third pitch looked like a wide icefall. However, it turned out, although the middle section had two inches of ice, five inches of air separated it from the rock.

I belayed below listening to the horrible noises while the ice creaked and boomed as only rotten ice can. Thankfully the upper and steepest section had good ice and screws. 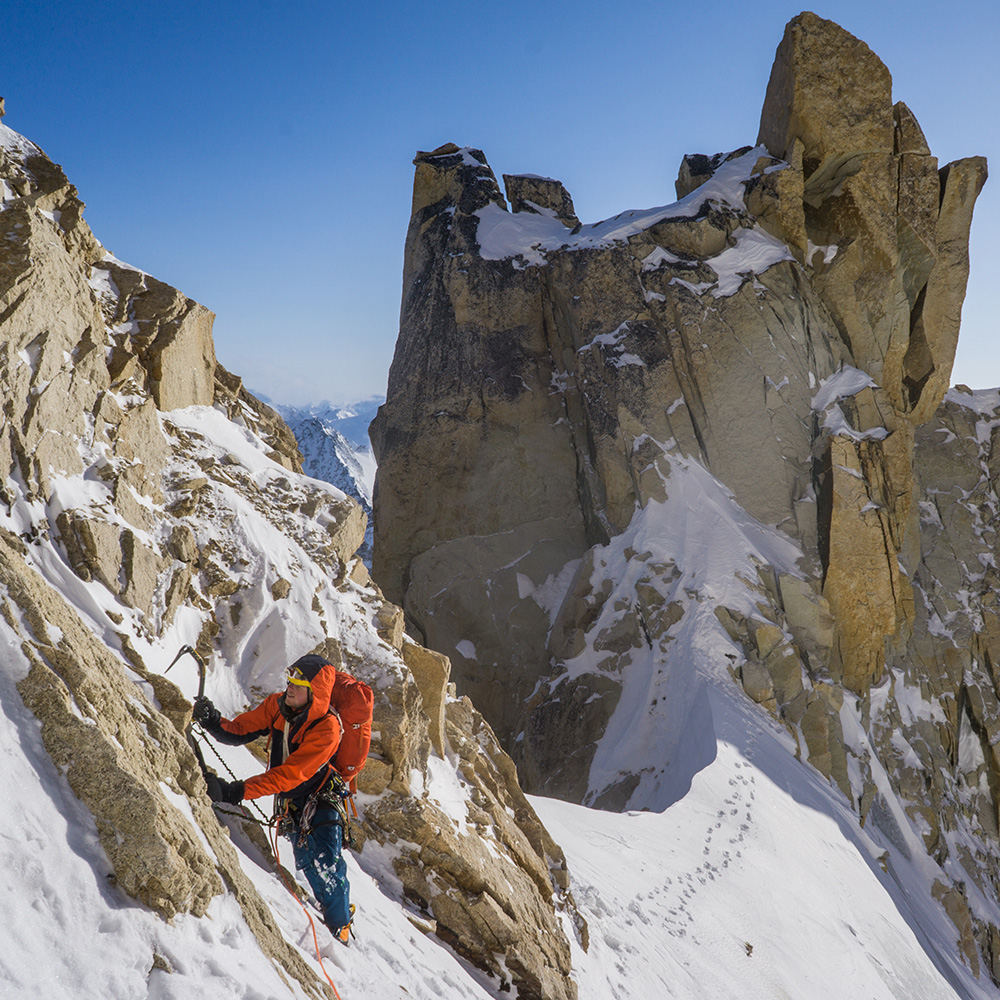 From here a 150m snow slope led to a junction of the gully. The right-hand branch looked like a good direct way up but had more steep snow which would be time-consuming. The left looked much easier apart from one pitch, up what appeared to be an overhanging chimney. We decided to try the left and were rewarded. I got into the chimney and found the left wall to be covered in excellent ice that even took screws. It felt weird to be climbing such secure ice.

It really made me realise how the lower pitches had been hard and really quite serious. We nicknamed this pitch “the gift” as it was such a surprise. A long snow slope led to a gully and this led to the main ridge. After a few hours of alpine style ridge climbing, we found a good flat spot just before dark and settled in for the night.” 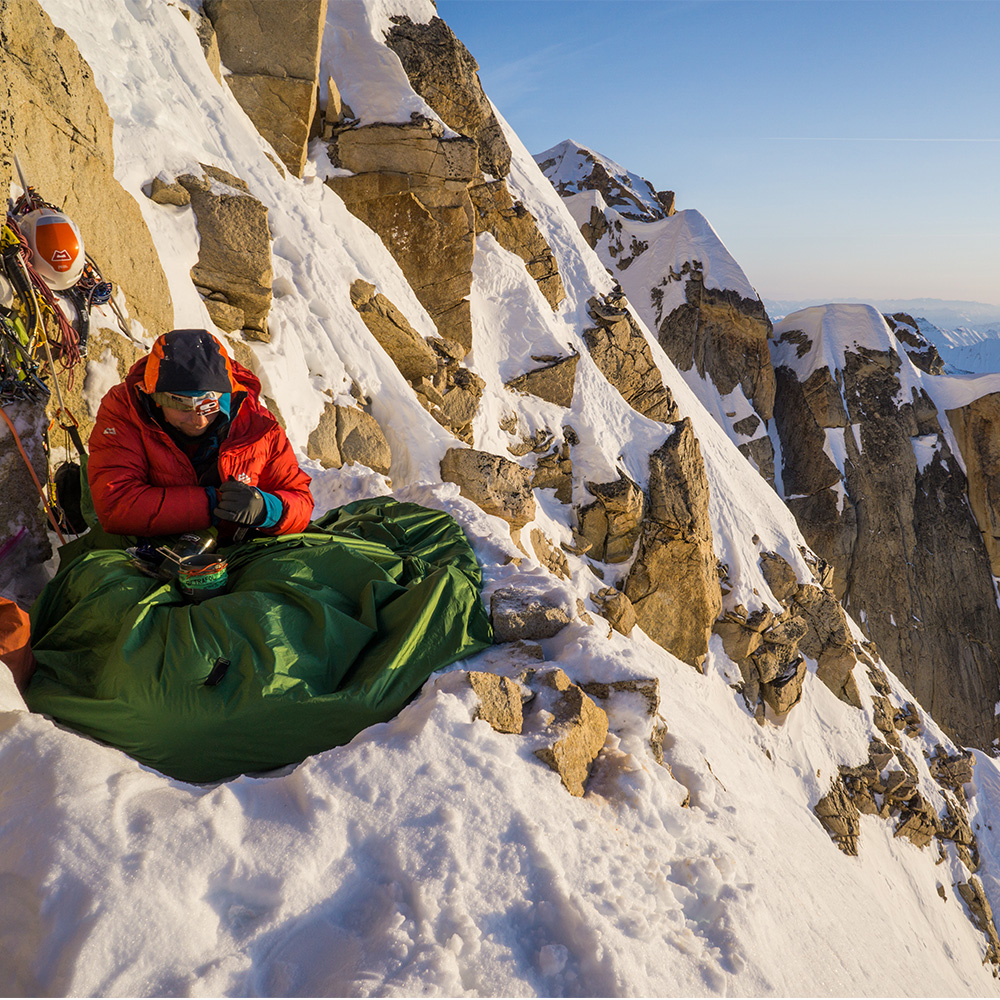 “We continued traversing the ridge, dropping onto the left side and doing some ledge shuffling to reach a col. From here we just soloed up the easier ridge to the summit where we sat in the sun for a while enjoying the warmth and the fact there was no wind.

For the descent, we down climbed back to the wires but instead of abseiling down the gully on the east face which a previous expedition had climbed we went down the west side. Three long raps later we were in a broad gully that could be downclimbed to reach the massive south-east couloir which we walked down in 40 minutes. 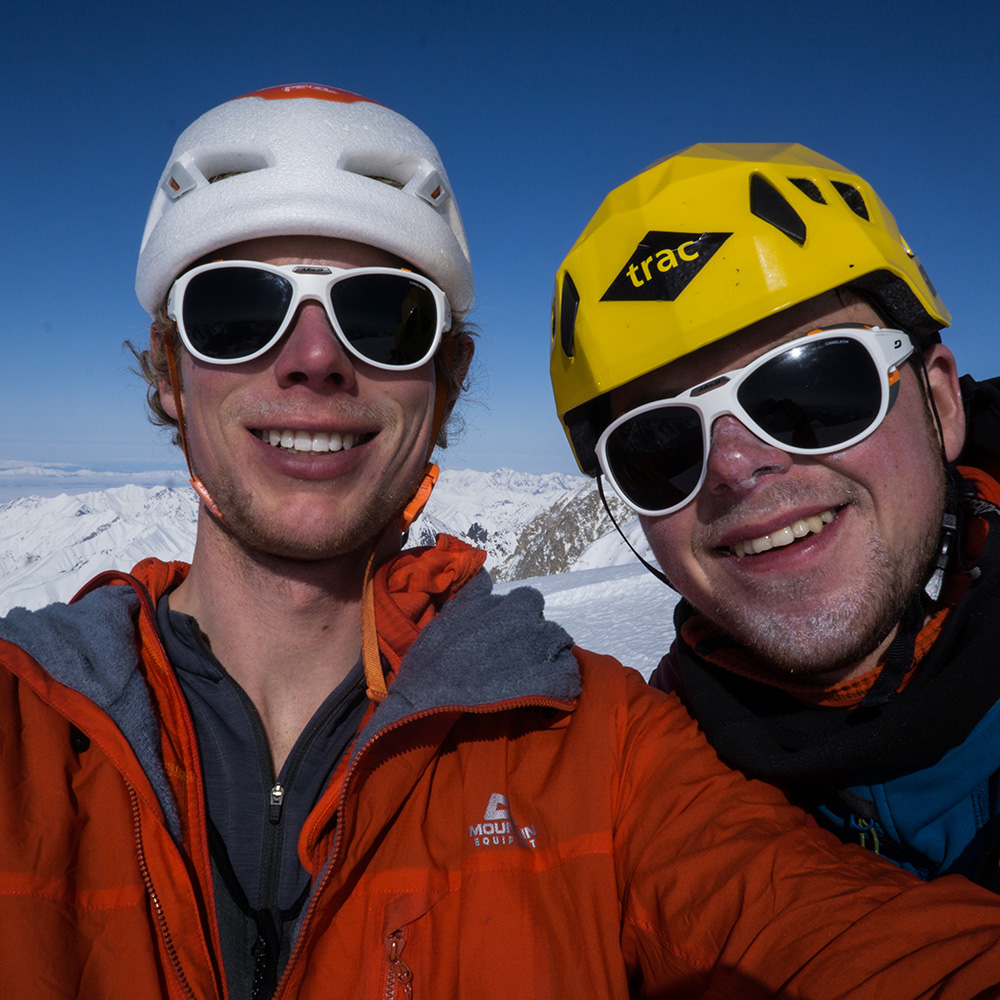 This left us at the base of a col which blocked our way back to our skis and base camp. It looked quite big, we guessed six pitches. It didn’t have one obvious way up. After a bit of debate and using the last of our gas to melt some water, we decided to try the steep looking gully on the left. I sat thinking that we had made a big mistake and that we were about to have to do more run-out steep snow climbing.

In the end, the thought of getting going was worse than the actual effort of climbing. The snow getting to the base of the gully was the worst bit. It had been fully thawed by the heat of the sun and felt like trying to climb up the inside up of a slush puppy machine. Once on the steeper sections, the ice was surprisingly good and after 2 pitches Tom arrived at my belay. 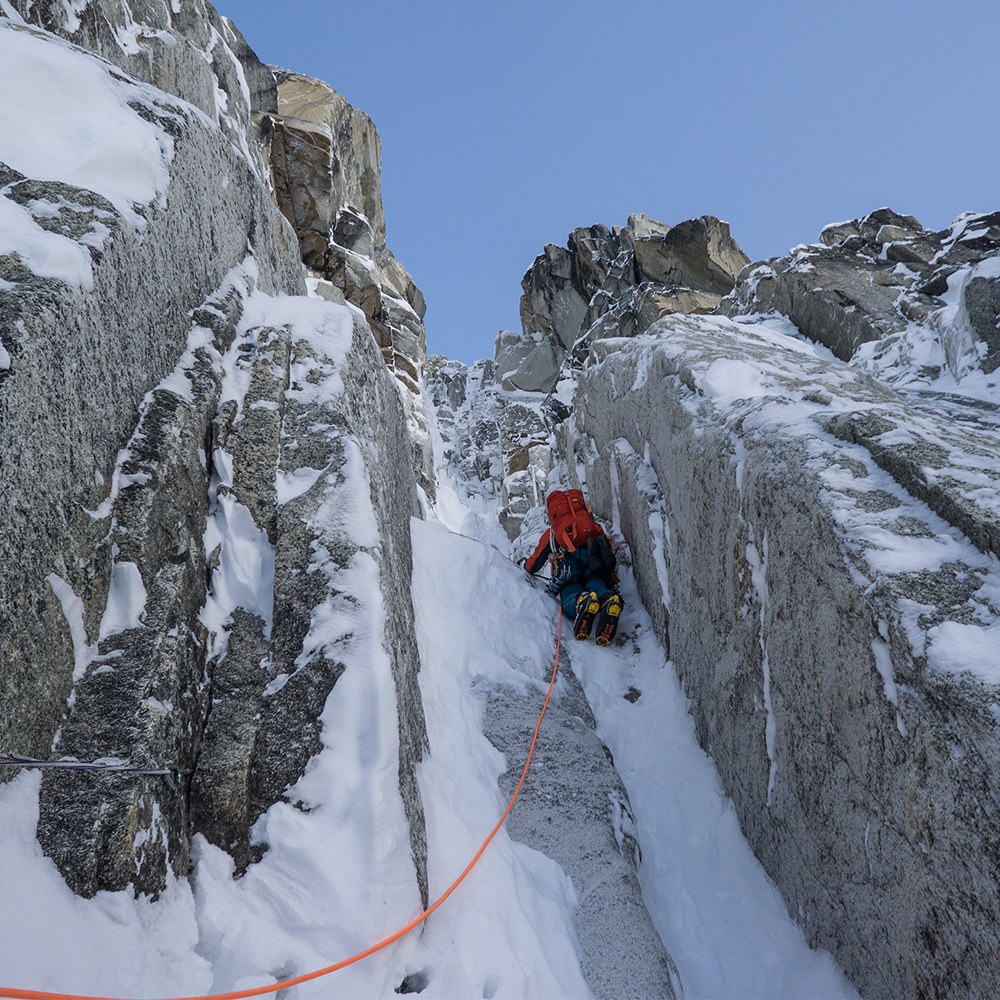 Uisdean on ‘Fun or Fear’ -photo by Tom Livingstone

Tom set off and tried to make his way up the side of a roof which had a small snow mushroom underneath. After some digging he down climbed and looked around. Spotting a crack on the right wall he aided his way up it. Eventually, he reached some slabby ground and quickly found his way back into the gully. A pitch later much to our relief we were at the top of the col.

I took the rack and looking down a gully found an anchor to abseil off easily enough but I could also see the top of what appeared to be a massive snow mushroom. “Really hope we don’t have to touch that,” I thought as I started abseiling. 50m later however to my huge relief I saw the mushroom was sat on a massive chockstone and we could just abseil straight under it. The second abb was very pleasant – for the first 15m until I came to an overhang. I looked down to see a huge slot. I started abseiling hoping my ropes reached something at the bottom. 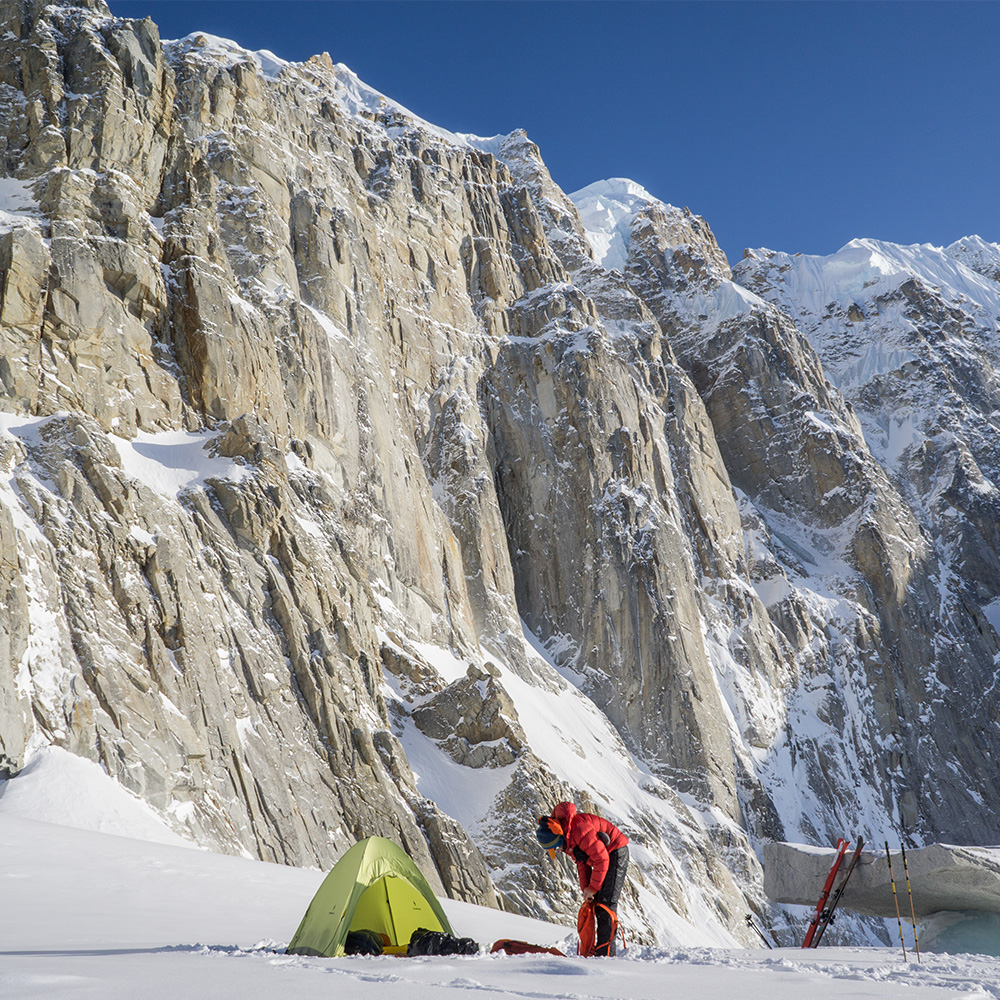 Uisdean at the campsite below the North Face of Mt. Jezebel- photo by Tom Livingstone

After a wild 45m, I realised my ropes were about 3 metres short of a ledge system. I climbed back up 10 metres or so to a chockstone and as I couldn’t find anything else to abb off.  I thought, “oh well only one thing for it,” and threw a big loop of tat around the chock stone, bounce tested it and then shouted, “Rope free!” Tom didn’t seem too concerned when he arrived but wasn’t overjoyed to join me and just free hanging off the chockstone. However, all went well and we abseiled to the big ledge 20m down. From here it was only 2 more abseils down to the glacier. We trudged back to our skis and were soon celebrating in base camp by eating deep fried wraps with cheese.”

Words by Uisdean Hawthorn and pictures provided by Uisdean and Tom Livingstone.