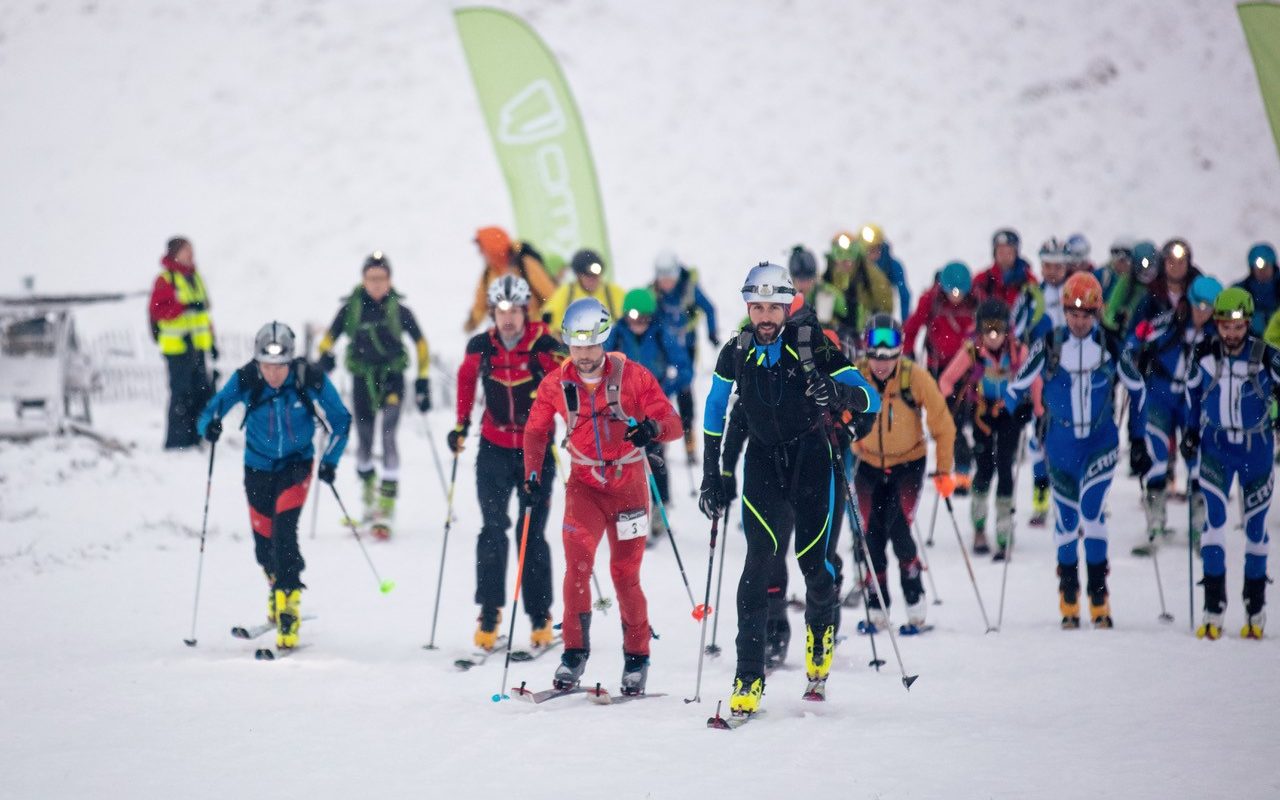 Di Gilbert, along with being a fantastic ambassador for Scarpa is also the Director of Skimo Scotland and knows more about the lycra clad pursuit than most. She’s planned and implemented Ski Mountaineering races for the past 6 years in Lecht, Glenshee, Glencoe and the Nevis range, and is a participant and supporter of the sport herself

Here Di gives us an overview of ski mountaineering racing and some insight into the foundation of this sport in Britain.

The rise of the lycra skimo racer

I am a climber and mountaineer at heart but I am often seen with a pair of skis at the bottom of my feet when conditions dictate. Without a doubt, I will be the loudest person on the mountain ‘whooping’ and ‘wheeing’ when I finally find that sweet descent.  I love nothing more than strapping on a proper fat pair of skis and chunky boots at the end of my feet. However, the harsh reality is that in Scotland to me it’s all about the journey and if I get a good descent that’s a bonus.  So, more often than not I won’t have a proper fat pair of skis and chunky boots on but will have the lightest boots and lightest skis that I can get my hands on. 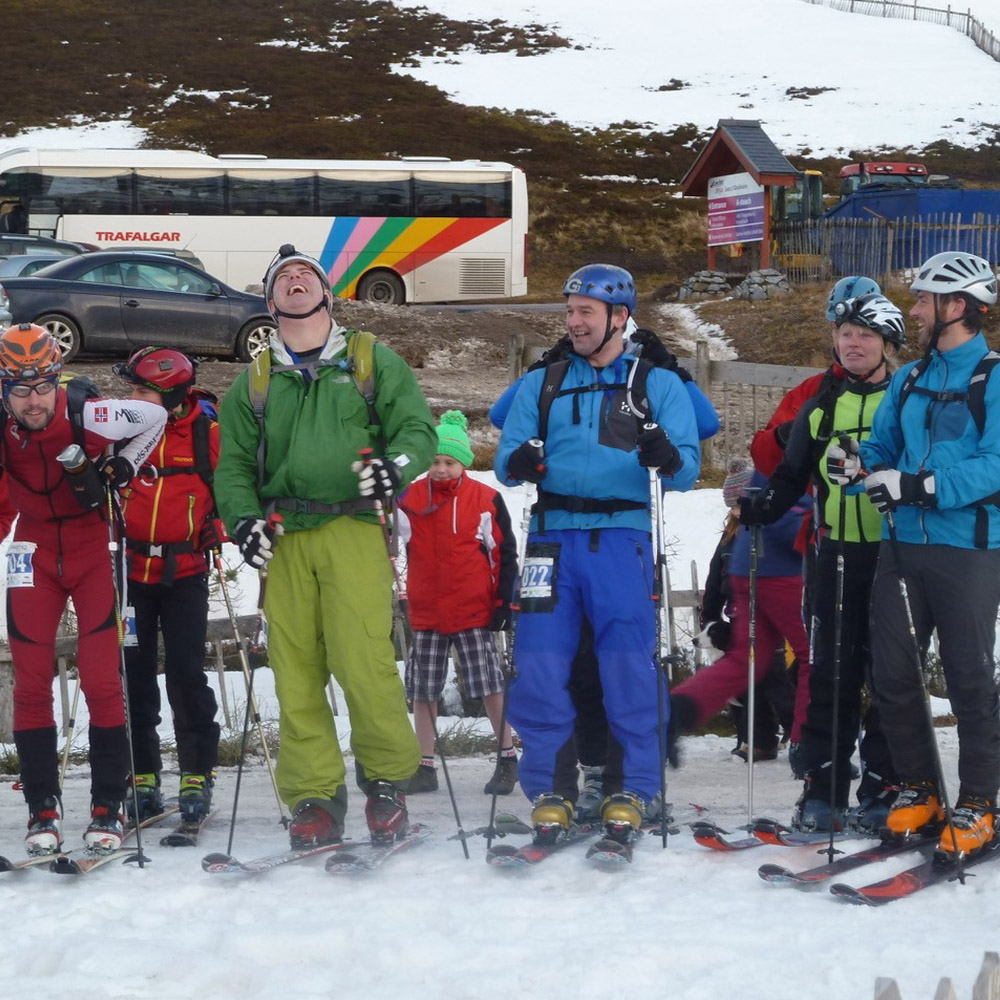 Skiers check skiers out.  You get the once over and cast judgment pretty fast and because I wear the lightweight kit and can transition from skin to ski mode before the majority of others have got their first boot out their binding, I quite often get the double once over.  It’s only then that I get asked the question, “Are you aware of this ski mountaineering racing that happens now?”.  I chuckle because I have been asked this question on more than one occasion now but I’m still not quite sure what my official response is going to be.  I sometimes answer reservedly and just let people tell me about it, which is pretty cool, but I have also answered and then had to very consciously tell myself to shut up because I don’t know when to shut up.

“Am I aware about this ski mountaineering racing that happens now?  You bet I know about it.”

It was me and my friend, Louella.  We brought this ski mountaineering racing to Scotland.  We called it Skimo Scotland. 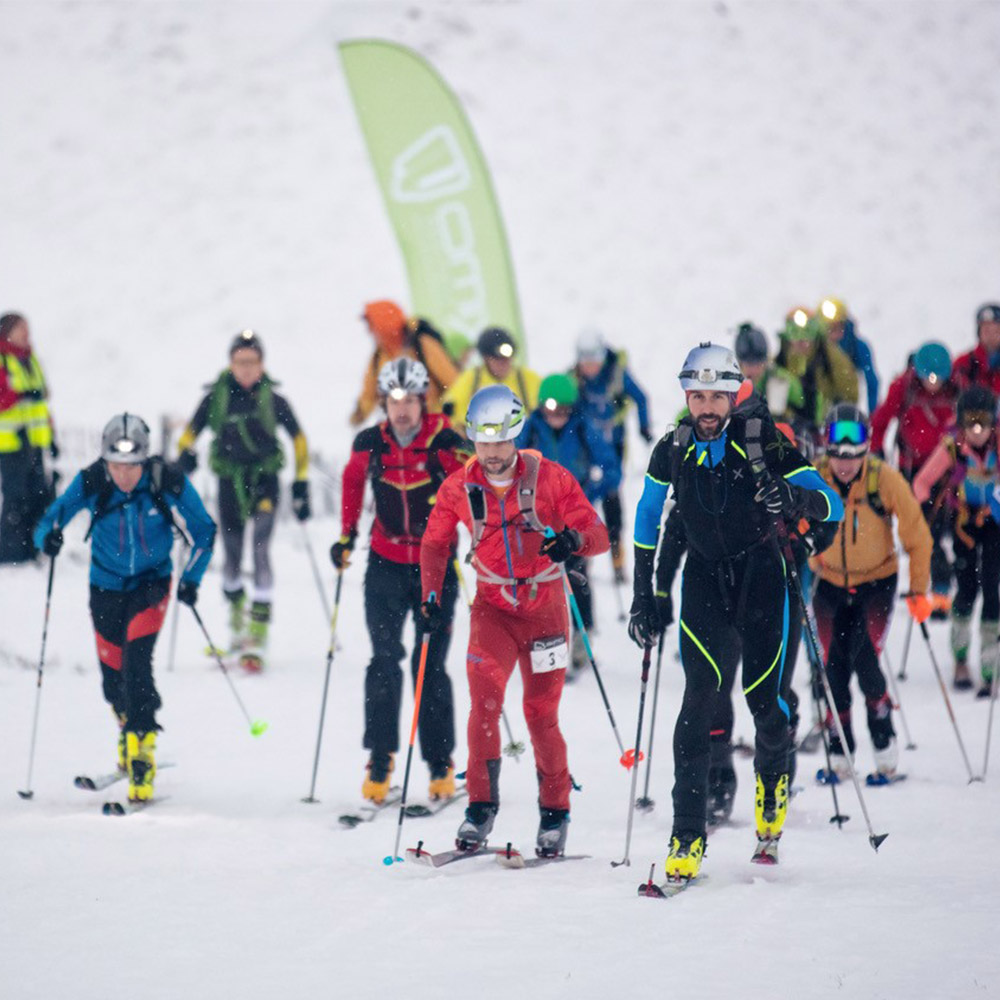 Despite the reservations that the majority of people had when we first proposed racing within Scotland’s managed ski areas, we have proven them wrong and we are now into our 6th Skimo race season.  We have watched our racer numbers increase; we have witnessed the growth of the Skimo community grow; we have held 2 British Skimo Championships and we have been instrumental in bringing like-minded people together to have the most amazing adventures on home turf and further afield.

So, what exactly is ski mountaineering racing?

Quite simply, skimo is ski mountaineering/touring with a sense of urgency.  It’s a race.  It’s a race where racers compete against each other, the course, themselves and more often than not, the conditions.

At Skimo Scotland we have 3 race course formats, race 6 times from December to March at 4 out of the 5 Scottish ski resorts.  Our season starts off at the Lecht where we have a relatively short course with minimal ascent/descent and all racers have 90 minutes to complete as many laps as possible.  In theory, there is normally one skin ascent to the top of the hill before racers transition into ski mode before descending to the bottom of the hill.  From there, another transition when racers will strap skis onto the rucksack and then walk/run (boot pack) to the end of the course.  For the Glenshee, Glencoe and Nevis Range races there is a set course which will involve numerous skin ascents, ski descents, and potential boot packs.  The 3rd type of race we have are the vertical’s.  This is basically an uphill timed race with no transitions.  We try to showcase each resort by skiing the best lines but in true Scottish ski fashion, it’s not unheard of for us to be skiing up and skiing down over heather, bog, and mud.

We normally race in the afternoon which gives us time to prepare the course in the morning and all the races finish with a meal which we feel is so important in bringing people together. 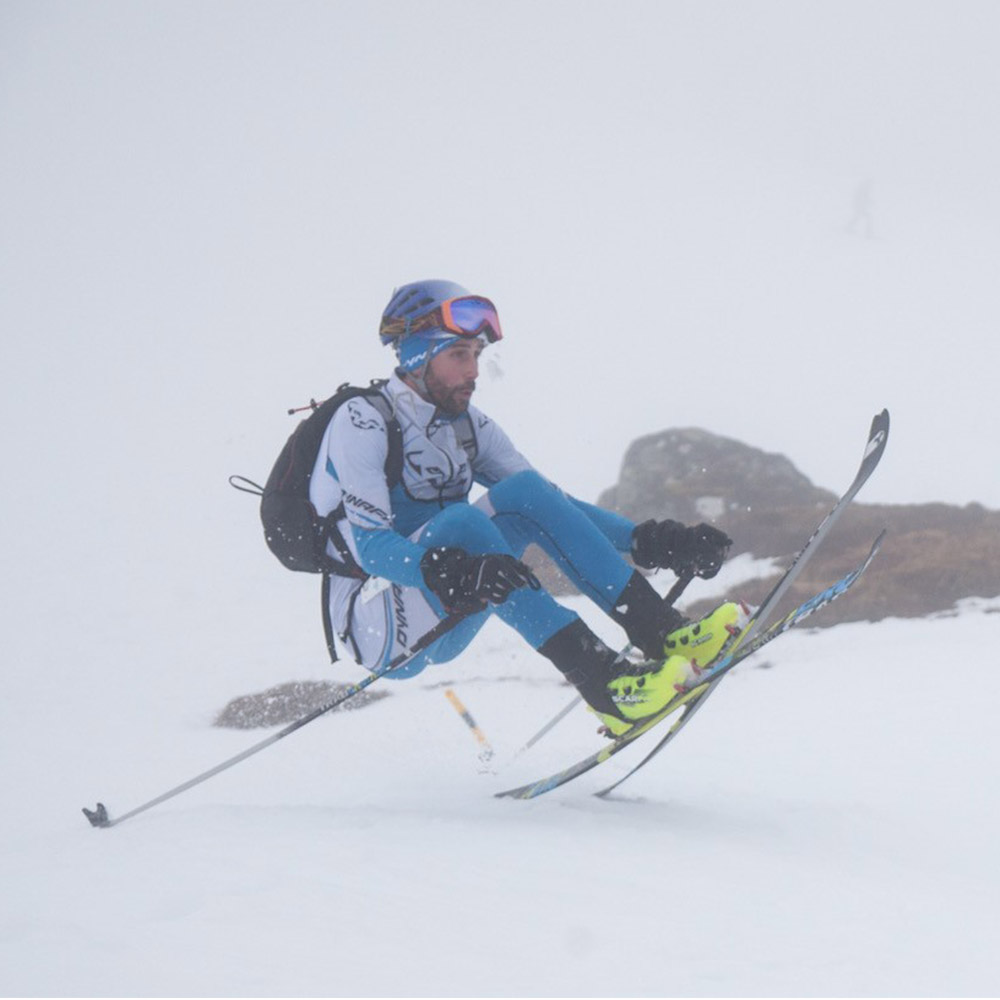 The people that make it happen

Skimo Scotland is completely driven by volunteers. Ok, I’ll be honest here. It’s my family and close family friends; my friends who have been bullied into helping; my friends who really don’t know any better; racers families who we’ve managed to persuade that marshalling is really cool and fun; we’ve even managed to get the boys and girls from Aberdeen Mountain Rescue Team to get involved (for some really weird reason they actually enjoy being put into the most hostile area for hours waiting for people to ski past them); and we’re now getting really cool people who love the Skimo scene and want to be involved.

“We do it because it’s just great fun.”

It’s challenging don’t get me wrong. It would be challenging to organise in a country with benign weather and snow conditions, so to race in Scotland is super special. Our racers do come from all corners of the country who completely embrace the scene, so I remind myself that if they can put the effort in to come to us, the least we can do is try and put on the best show possible for them.

Wouldn’t be Skimo Scotland without the heather run

Our racers come from a huge variety of backgrounds and yes, we do appeal to the lycra clad racer, many of them elite fell runners, but we also appeal to the recreational racer who do genuinely race on a proper fat pair of skis and chunky boots.  Let’s be honest, they will certainly be enjoying the descents more than the guys and girls on the matchsticks.

If you have read this far, and you’re in the mountains, if you see a blonde woman with pigtails, probably ‘whooping’ and ‘wheeling’, just ask her the question “Are you aware about this ski mountaineering racing that happens now?” and watch the sparkle in her eye and the grin spread from ear to ear.

Words by Di Gilbert; All photos provided by Skimo Scotland

Learn more about Di by reading her Scarpa Team profile.

Di’s good friend and colleague, Richard Bently has written a great article for us about training mountain guides on a snow-laden Ben Nevis which is accessible here on the Scarpa Blog.