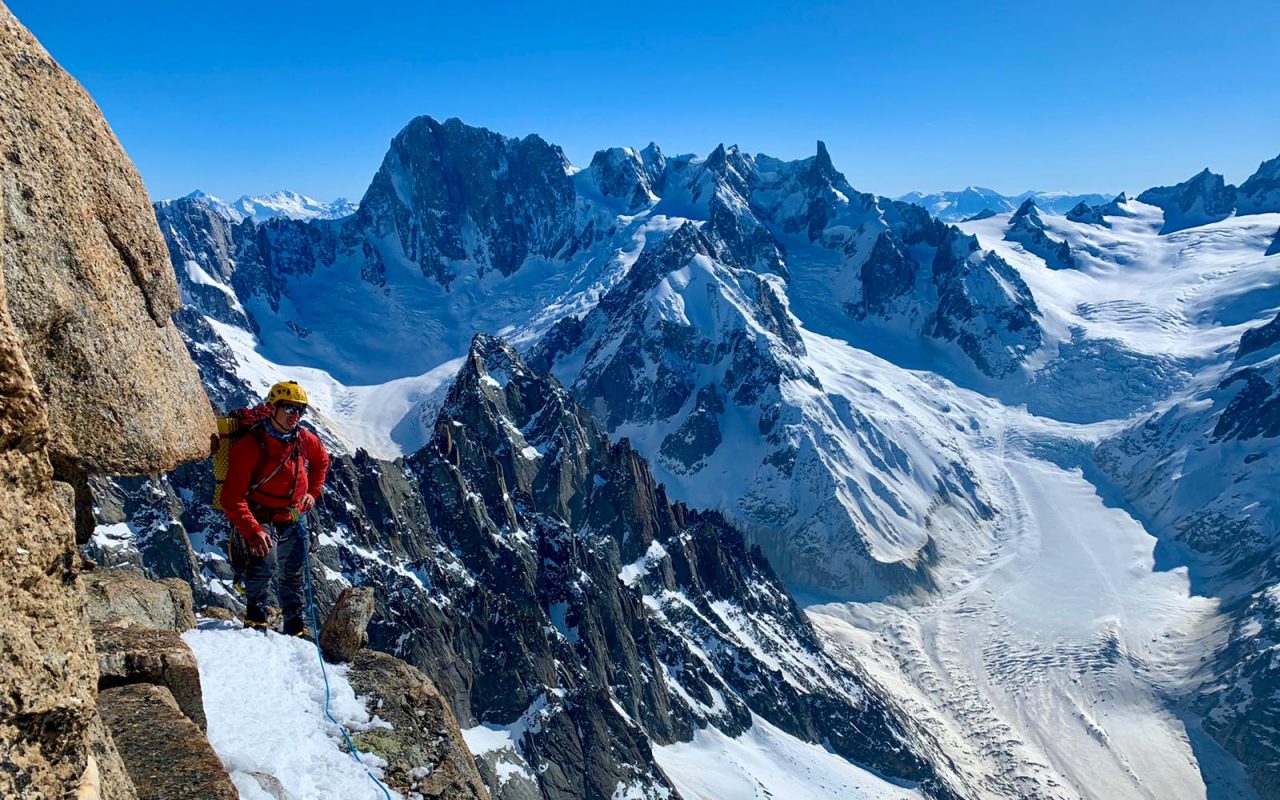 Tom Grant set out to tackle the Dru North Face above Chamonix this winter. In this blog -Tom takes us through the climb.

The Dru towers above the Chamonix Valley grips the imagination of all those who stare up at its imposing walls. The Dru has spectacular granite architecture, steep on all sides and there is no easy way to the top, especially in winter.

The first ascent of the north face was made by Pierre Allain and Raymond Leininger in 1935. A classic route in summer with lots of grade 4 and 5 rock climbing, it is also a logical winter objective. With the growing number of warm and dry spells in the Alps during wintertime, winter/early spring ascents of the Dru have grown in popularity.

In normal summer conditions a lot of the rock is loose and much of the climbing isn’t of stellar quality. The Dru North Face was listed by Gaston Rebuffat as one of the 6 great north faces of the Alps in his book Storms and Starlight and at the time these faces represented the cutting edge of alpine climbing. To climb any of these faces in winter is still a serious undertaking. With 800 meters of sustained climbing, a winter ascent of the Dru is normally a multi-day affair.

In late February this year, there was a two-week period of sustained high pressure providing a perfect window for the route. Alpine climbing conditions were prime and there was a buzz of excitement in the valley as alpinists and out of work guides were getting after it, sending big routes all over the Massif.

After a beer with my good buddy Will Sim who was headed out to repeat a hard big wall route on the Dru west face, the idea crystalized in my mind that I should also head to the Dru. I figured the thuggish but well protected granite climbing would provide the right level of challenge.

During a normal winter season, between my usual focus on skiing and having regular guiding work, an opportunity like this doesn’t always come along. I wanted a strong team for the route and luckily two friends and fellow British guides James Clapham and Dave Sharpe were also free.

What would normally have been a quick and easy approach with the Grand Montets lifts open, now became nearly 2000 meters of skinning with packs loaded with winter climbing and bivi gear. Some leg burning skiing down the classic Poubelle couloir brought us out onto the slopes of the Pas de Chevre and soon to underneath the Dru itself and our bivi spot.

Satisfyingly tired from the approach, I was relishing getting stuck into the climb the next day. To me there are few things better in life than enjoying the camaraderie of a good mountain partnership while excitedly anticipating what lies above. The complexities of life are stripped away to the bare minimum, where happiness is equated to the most basic of physical comforts and good moral.

Setting off just before dawn, we headed up the initial line of couloirs taking us towards the famous Lambert crack and the start of the steeper climbing. The benefit of a winter ascent is that these rubble strewn couloirs are made safe by consolidated snow and ice. James led into the Lambert crack via a spectacular ledge above the void.

Thin ribbons of neve and steep hooks provided a superb pitch finishing with 5 meters of an awkward and unprotectable steep groove. What would have been straightforward on dry rock and in rock shoes turned into serious mixed climbing. More high-quality climbing followed a series of gullies and a smooth sided chimney which we hauled our packs behind us on, crampons skating erratically on the chimney walls.

We were contented with our progress and reached the famous bivi spot at around two thirds height where the American Direct on the west face joins the north side. There was time to push on, but we knew we were still many hours from the top still and we didn’t want to miss the best bivi spot on the route.

Perched amidst the most incredible granite scenery and with a perfect view of the Chamonix Valley, one could not wish for a more impressive spot to spend the night. We brewed up and fixed a rope up the next burly pitch to speed things up in the morning. Slipping into my sleeping bag, the vertiginous void of the west face was half a meter from my feet, and I felt very privileged to be enjoying such a spot.

Despite the unseasonably warm temperatures, it was still wintertime, and it was with some relief to me when the alarm went off that morning meaning an end to the chilly night. Above the bivi ledge came a series of crux pitches, leading improbably upwards through some very steep terrain by winter climbing standards.

Being a team of three allowed us to enjoy the route to its fullest, sharing lots of banter and the physical and psychological burden of being on the sharp end. I was loving every minute of it and gave myself a metaphorical pat on the back for being in the right place, at the right time and with the right team. It’s not a given for these to all come together.

Topping out routes like this is can often be longer and more involved than one would wish, but that pretty much sums up alpine climbing. More awkward and physical climbing finally saw us crawling through a small keyhole and into our first rays of warm sunshine. From here the route meanders up sun-kissed rock and snow gullies on the south side, not always obvious, but we followed our noses, and it was with some relief that we arrived on the summit of the Petit Dru with its lightning scared Madonna proudly perched overlooking the entire length of the Chamonix Valley below.

Back at our bivi spot we ate, packed up, and headed out for the final arduous slog back up the Poubelle Couloir at midnight. Knowing that the piste, the car and the comfort of my bed were now not far off, I enjoyed the last thigh burning push up the steep snow, again laden down with our heavy packs.

A couple days before the Dru North Face I’d been on a two-day mission to try and ski a very big line, and despite being pleased with how fit I was feeling on the Dru, I knew it was all about to catch up with me. Resting at home afterwards, the feeling of tired satisfaction combined with a mild emptiness at having achieved a specific goal, led me back to the usual routine of pondering the next adventure.

I spent a lot of time in my early/mid 20s climbing the classic big routes of the Alps. These were formative experiences that tested me and helped make me who I am today. Between guiding work, focusing on skiing and family commitments I’ve not had as much time to get strapped on big alpine routes as before. I like to remind myself that our comfort zones can either grow or shrink, therefore I was happy to climb a multiday winter route again and be comfortable operating in that environment. A dose of measured alpine suffering is good for the soul from time to time.